"I don't like shopping in stores," admits Shanker Bhardwaj, a 28-year-old Toronto-based artist and bartender who would rather purchase clothing from e-commerce sites than traipse around the city looking for the latest designer gear.

Even Max Valiquette, a 39-year-old who works at a Toronto advertising firm and loves to shop in actual stores, makes the majority of his purchases online because it's convenient and there's a better selection. "I can buy something from a label I would otherwise never come across in this country," Valiquette says. "And for a good price, too," he adds.

Bhardwaj and Valiquette, it turns out, are part of a growing number of men who are doing most of their shopping in front of the computer. A recent study conducted by iProspect, a global digital-performance agency, found that 70 per cent of the affluent, plugged-in men tracked worldwide – that is, men with an annual household income of more than $100,000 – prefer to shop for items for themselves online. In fact, half of them are clicking their way to more than $4,000 a year in online purchases. In Canada, the trend was bolstered this year when several popular American men's shopping sites, including the discount designer site Gilt Man, extended shipping to Canada.

Valiquette is a regular shopper at Gilt Man. When he gets an e-mail from the site tipping him off that his favourite leather Grenson brogues will be included in one of the site's infamous noontime flash sales, he will log on moments before it starts, hoping to snatch up a few deeply discounted pairs.

Apparently, the growing affection among men for online shopping is about more than just time saving and comparison shopping, which women have been enjoying online for years, especially when it comes to deeply discounted designer sites. "Gilt Man has turned shopping into a competitive sport for guys," says Tyler Thoreson, the site's vice president of editorial, creative and customer experience. If the thrill of the chase is a factor, however, so too is an increase thirst for fashion knowledge. At Park & Bond, the full-priced men's luxury e-tailer that Thoreson also oversees, purchases tend to be less impulsive and more thought out: "Here guys want to learn about what they're shopping for," he says.

This desire of male shoppers to, as Thoreson puts it, find out "what's under the hood" is being catered to by several sites – Park & Bond, Mr Porter and oki-ni among them – offering visitors as much information as product. The easy-to-navigate content on these websites borrows heavily from print magazines and includes fashion shoots that showcase the season's top looks alongside profiles of stylish guys and loads of practical wardrobe advice to satisfy a male shopper's needs.

Thoreson has another theory about why online shopping is gaining popularity among men: "There's a new group of guys who are blogging or posting on their Tumblr accounts and geeking out over the construction of a suit or the latest footwear," he says. "It's not dissimilar to how men were talking about tech products 10 years ago."

Angus MacDougall, a 30-year-old digital-program manager in Toronto, might be considered one of these new apparel geeks. "I'll catalogue items on Pinterest," he says, citing the photo-sharing site he uses to create a virtual closet full of the pieces he is planning to buy online each season. He will also send clothing links to trusted friends via Facebook for second opinions.

No matter what others think, however, everyone knows that the true evaluation occurs once a man tries on that coveted Givenchy wool biker jacket in the comfort of his own home, away from what Bhardwaj describes as "those perfectly designed boutiques with flattering lighting where it's hard not to look good."

And if the jacket doesn't fit right or the colour is lighter than what was seen on-screen, it's simple: Wrap it back up, return it for a refund (many sites cover return shipping fees) and get back online to shop some more. 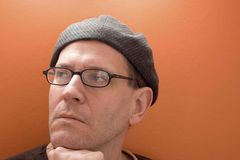