First came the bangs. Then a comedy sketch on NBC's Late Night with Jimmy Fallon. Next, her unexpected presentation of the Oscar for Best Picture. Now, in April, she graces the cover of Vogue magazine, for the second time.

Do we need any more confirmation of Michelle Obama's apotheosis?

Some of the intense interest in the first lady may be owing to the fact that she is now inviting it. The second term of her husband's presidency gives her increased freedom to be herself, notes Jennifer Lawless, director of the Women & Politics Institute at American University in Washington, D.C. "She knows that she never has to campaign for her husband again. Nothing she does can be fodder for his opponents," Lawless explains in a telephone interview.

There is little question that Michelle Obama has not only shrewdly leveraged the power of the first-lady role – "a subtle part of the presidency," as Carl Sferrazza Anthony, one of several first-lady scholars in the U.S., told me on the phone – she has also struck a chord in the way that she has confidently picked her course through the battlefield of modern womanhood.

First ladies are often a lightning rod for cultural angst about the choices women have and are intensely scrutinized for the ones they make. But in her choice of fashion, Michelle Obama is an exemplar of how many modern women think and behave. It's not about Having It All. And it's not about Having It All Just Not At The Same Time – the popular sequential view of how a woman can organize herself with career, marriage and motherhood, a path that often ends in heartbreak as women discover they cannot conceive. It's more about braiding various responsibilities as wife, mother, Ivy League alumna and professional, allowing some strands to be thicker at certain stages of life, depending on the circumstances.

Sure, her clothing is politicized. All first ladies have had to recognize that their fashion choices communicate sensibility instantaneously. Martha Washington wore homespun fabric to appear frugal and anti-royalty in the new republic, for example. In Everyday Icon: Michelle Obama and the Power of Style , Kate Betts points out that in the early stages of her husband's campaign, Michelle Obama was considered harsh, an impression reinforced by her wardrobe of power suits. Three months in, she announced she would put a hold on her $300,000-a-year job as a vice-president for community and external affairs at the University of Chicago Hospitals, and by the time her husband had won the Democratic nomination in June, 2008, her wardrobe was taking a turn from Power Woman to Power Wife and Power Mom.

Many have characterized her look of feminine prints, J.Crew cardigans and kitten heels as a ploy to connect with the average female voter – a crucial part of the electorate. And that's clearly at play. As Betts points out in her book, in the wake of news that vice-presidential candidate Sarah Palin had splurged at Neiman Marcus and Nordstrom, spending $150,000 on designer clothes during the election campaign, Michelle Obama was on Jay Leno's show announcing that her outfit only cost $340.

Political brinksmanship aside, Michelle Obama's massive appeal lies in the fact that there's a genuineness to her public image. Her appearance seems to echo the way she thinks as a woman – namely, that she moves easily from one role to the next, professional to Mom to hostess to wife, and that she refuses to be defined by any one of them. Unlike other Washington wives in their boxy St.

John luncheon suits, Michelle Obama makes it clear that she is more than the image she projects through her fashion choices. They are simply props – and fun ones at that. She will get dolled up to host a state dinner at the White House, and when she goes on vacation in the Grand Canyon with her family, she will wear a T-shirt, hiking shorts and running shoes, even if she is travelling on Air Force One. She will dress to please herself, just as she will concentrate on the roles that mean the most to her at any particular time.

One could argue that Hillary Clinton's failed attempt to work on health-care policy while first lady was a cautionary tale, influencing Michelle Obama to take the safe route by deciding to be Mom-in-chief while her husband is president. Feminists saw it as a step backward. But what mother hasn't at some point curtailed her work life – even dropping out of a big job – to focus more on her children, especially if circumstances allow for it? Anne-Marie Slaughter is one example. The author of last year's much-discussed essay Why Women Still Can't Have it All in The Atlantic left her power position in the U.S. State Department to be more available to her two children. She didn't drop out completely. Still a professor at Princeton, she is working on a book as well. She has simply braided a different, thinner strand of work into her life at this particular moment.

Michelle Obama will be a hands-on Mom in her Target pants and J.Crew cardigans for as long as she needs to be and, then, just as she changed from Power Executive to Power Mom, she may very well change back. It won't be because it is politically safe to do so (although that may be part of it). Rather, it could be simply because her children have grown up.

Michelle Obama may morph into a whole new persona in the years ahead in clothes that will surprise us. And it won't just be because she's trying to fit someone else's idea of what she should do. It could just be because it feels right. 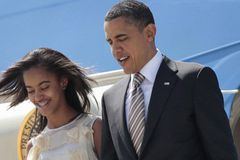 Michelle Obama: An inspiration to any woman hitting the gym
April 28, 2018
Follow Sarah Hampson on Twitter @Hampsonwrites
Report an error Editorial code of conduct
Due to technical reasons, we have temporarily removed commenting from our articles. We hope to have this fixed soon. Thank you for your patience. If you are looking to give feedback on our new site, please send it along to feedback@globeandmail.com. If you want to write a letter to the editor, please forward to letters@globeandmail.com.
Comments