Five years after the death of Yves Saint Laurent and almost five decades after its launch, Le Smoking, the late, great designer's tuxedo suit for women, is alive and sizzling. There is perhaps no other garment so recognizable, reinterpreted and unconventionally risqué as Le Smoking, which has a recurring role throughout this spring's collections – often shape-shifting like a spy in a Frederick Forsyth novel.

Of course, women had already found ways to dress up without donning a dress long before the designer first introduced the look in 1966. Consider two famous early examples: the French writer George Sand (née Amantine Lucile Aurore Dupin) and German actress Marlene Dietrich, who made sporting a tuxedo more sexually charged than wearing a negligee.

Indeed, Dietrich's famous tux-clad romp in the 1930 film Morocco radiates heat to this day. It was well after that movie's release and Le Smoking's runway debut, however, that the tuxedo as womanly garb acquired one of its greatest – perhaps the greatest – interpreters, admirers and proponents: Helmut Newton, whose famous 1975 photos of a dinner-jacketed dame with slicked-back hair brought it into the mainstream. In one of the best-known images, she is joined by another woman who is nude except for a pillbox-style hat and pair of heels. By juxtaposing the tailored structure of the black tuxedo against a naked body, Newton creates a thrilling, high-contrast tension, revealing the fetish potential of gender-bending formal attire in the process.

"It was the idea of a powerful woman being in control," Federau says of the shoot. "Now that's not as relevant, but the tuxedo is still so strongly associated with a man. This is where that attraction lies."

In 2005, an exhibition based on Le Smoking at the Fondation Bergé-Yves Saint Laurent in Paris was fittingly titled Smoking Forever. It featured 50 styles of the suit – an impressive count by any measure, but only one-fifth of the varieties conceived of by Saint Laurent throughout his career.

Today, the house is under the creative direction of Hedi Slimane, who defined an extremely slim suit silhouette during his tenure at Dior Homme. Arguably, this background offered sufficient preparation to tackle Le Smoking in his new role at YSL. When the moment arrived last October, his jackets did not disappoint, especially when paired with long skirts and second-skin pants. They seduced retailers, who apparently swooned over the collection (and will likely be worn to seduce as well).

Perhaps it was the anticipation of Slimane's debut that helped drive, even if subconsciously, the industry-wide tux trend. There they were for spring 2013: long and rectangular at Balmain, nipped and slashed at Jean Paul Gaultier, spacious at Stella McCartney, even more spacious at Maison Martin Margiela. The belted tuxes designed by Haider Ackermann serve as interesting counterpoints to those from Narciso Rodriguez, who went for effortless slouch. For his latest Lanvin collection, Alber Elbaz enthusiastically deconstructed Le Smoking, removing sleeves, remixing fabrics and reintroducing peaked lapels, sometimes in white. All of them were decisively angular.

In London, the message from Jean-Pierre Braganza was similarly assertive. While the Canadian designer consistently shows a formal, tuxedo-inspired jacket, he finessed the cut and pumped up the edge this season.

"I'm obsessed with the future and with modernism and I'm constantly injecting what I deem different and never seen before, but still within the confines of traditional garments," Braganza says. "I just imagined a power broker in a board meeting."

And when the business day is done, that same tuxedo transitions smoothly into an evening milieu, although it does still remain a less conventional choice. "We're so used to seeing women in little black dresses or gowns," says Nicole Phelps, executive editor at Style.com. "For me, there's a sense of not being quite on display like a doll for the delectation of everyone. Yes, you're covered up, but maybe you don't have a shirt on underneath the jacket so it's still a provocative look."

Steele, meanwhile, singles out Raf Simon's interpretation at Dior as a noteworthy update on not one but two classics. "He took the Bar suit, which is feminine and voluptuous, and spliced it with Le Smoking," she says. "Suddenly you have an interesting new look that is highly appealing."

In Steele's view, the current love affair with Le Smoking is a by-product of the industry's vacillation between its yin and its yang. "I'm reluctant to attribute it to any zeitgeist shift as opposed to a pendulum swing," she says. "We had lots of colour and now we're back in black."

Could you pull off wearing a single colour?
March 8, 2013 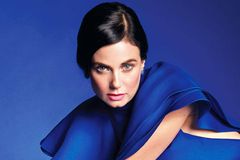 Dressing up? Ditch the dress and put on a pair of powerful pants instead
December 1, 2012 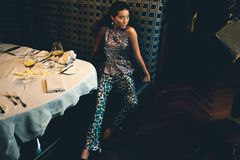 Going to a wedding this summer? Don't forget your bow ties, ladies
June 4, 2010
Follow Amy Verner on Twitter @amyverner
Report an error Editorial code of conduct
Due to technical reasons, we have temporarily removed commenting from our articles. We hope to have this fixed soon. Thank you for your patience. If you are looking to give feedback on our new site, please send it along to feedback@globeandmail.com. If you want to write a letter to the editor, please forward to letters@globeandmail.com.
Comments