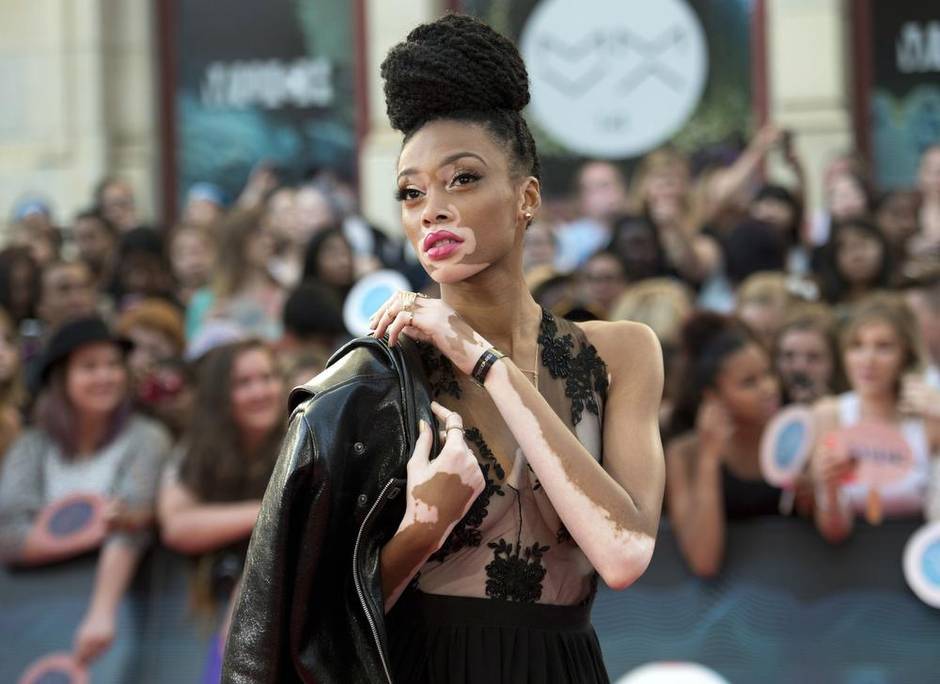 Chantelle Brown-Young arrives on the red carpet at the 2014 Much Music Video Awards in Toronto. Aaron Vincent Elkaim/The Canadian Press

“Many people have a story or a background, but mine is painted on my body,” Chantelle Brown-Young says in the home-video plea she filmed earlier this year in order to appear on the current season of America’s Next Top Model. Although the 20-year-old Toronto native boasts all the trappings of a cover girl – lithe limbs, a gorgeous face – one aspect of her look is totally unexpected: Her dark skin is covered in white patches, almost like reverse Rorschach ink blots.

Brown-Young, who also goes by the handles Winnie Harlow and Chantelle Winnie, has vitiligo, a mysterious autoimmune disease that sees the body attack its own skin-pigment cells. She is also on the verge of a modelling breakthrough, her look reflecting both the changing definition of what is beautiful and the evolution of the fashion industry.

“Diversity is the future of fashion,” says Ben Barry, an assistant professor at Ryerson University’s fashion school. Barry, who shuttered his own modelling agency in December, believes that Brown-Young is hitting the industry at the perfect time.

No matter who you are, you have quirks. I highlight the fact that being different is okay, which speaks to everyone.
Chantelle Brown-Young 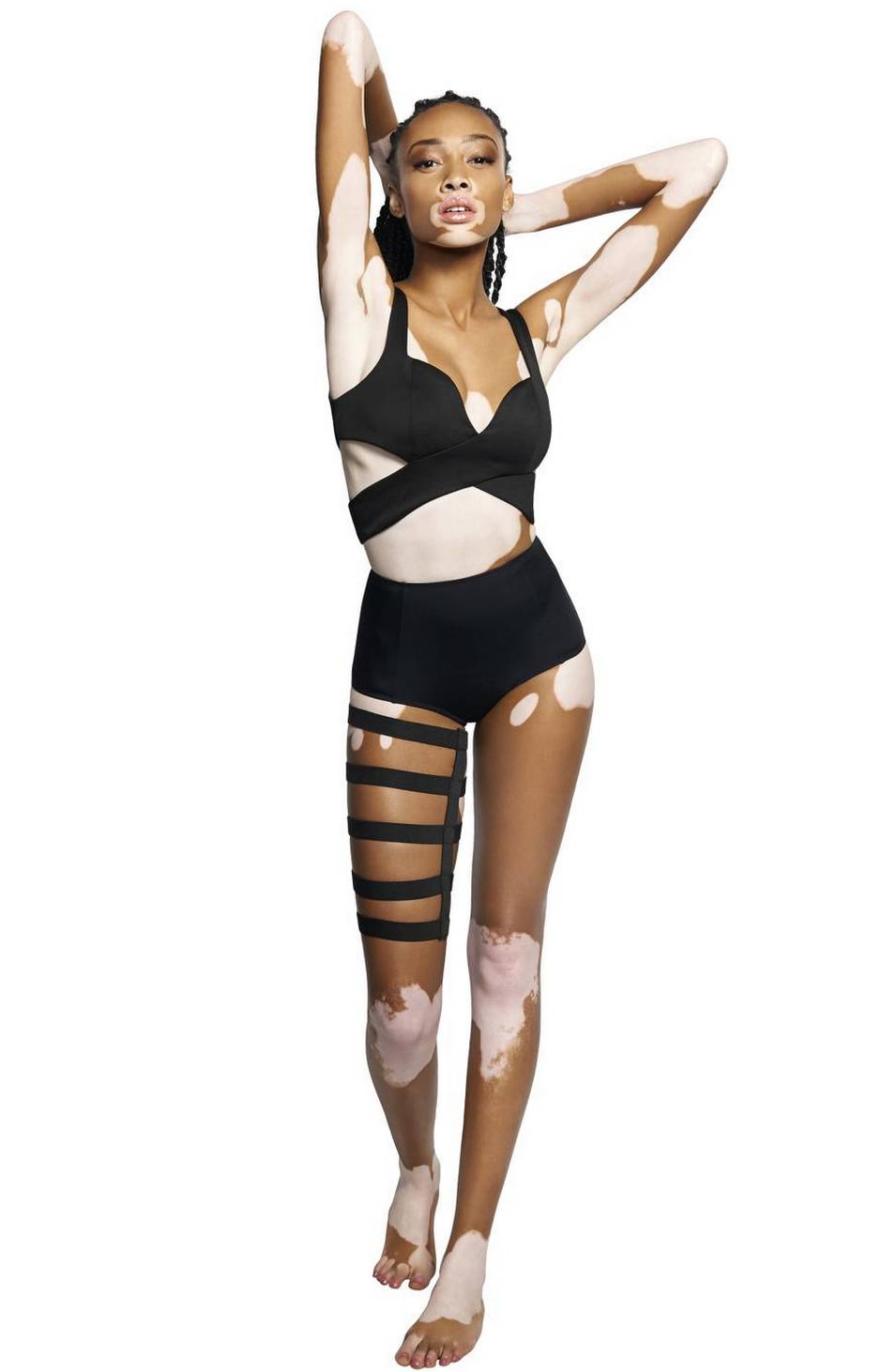 Growing up, Chantelle Brown-Young recalls, she was bullied and called names such as ‘zebra’ and ‘cow’ and didn’t consider herself beautiful. ‘There’s no Barbie with vitiligo,’ she says.

He might be right. Bolstered by her participation in (and subsequent elimination from) ANTM, she has walked down the runway during September’s London Fashion Week, been signed to front a major ad campaign and amassed a strong social-media base – more than 258,000 Instagram followers and counting. Such praise wasn’t always so forthcoming.

Growing up, Brown-Young recalls, she was bullied and called names such as “zebra” and “cow” and didn’t consider herself beautiful. “There’s no Barbie with vitiligo,” she says in a phone interview from L.A. What was once demeaned and ridiculed, though, is now considered striking: Brown-Young bears a slight resemblance to Rihanna and the white portions of her skin having a near-perfect symmetry. “No matter who you are, you have quirks. I highlight the fact that being different is okay, which speaks to everyone, no matter who you are,” she says.

Brown-Young’s distinctive looks and relentless optimism were perfectly suited to Tyra Banks’s brand of reality television. “We are not looking for duplications,” Banks stated on the season opener of ANTM. “We are looking for originality.” The fashion industry, at least over the past several years, appears to have been seeking the same thing. Montrealer Rick Genest, a.k.a. Zombie Boy, became an unlikely style darling in 2011; covered head-to-toe in tattoos that make him look like a human skeleton, he starred in Mugler ad campaigns and modelled for Jay Z’s label Rocawear. Americans Aimee Mullins (an athlete and double amputee) and Shaun Ross (an albino male model) are also fashion-world hits. But their success is not the norm.

Canadian Stacey McKenzie, who has been modelling since 1995, is one of the world’s best-known unconventional beauties. “I’m not your typical black girl,” says the Jamaican-born veteran, recognizable for her freckled skin, almond-shaped eyes and lush lips. “They can’t categorize me.” According to McKenzie, most models fit into a mould – “the girl-next-door or the avant-garde type” – and those who don’t find it harder to get booked for shows or campaigns. “The client really has to believe in us in order for us to get work,” she says. “We’re not going to be working every week like the typical-looking models would.” While McKenzie has appeared in ad campaigns for Mexx and Benetton, she fought hard to secure such gigs, she says. “They never thought I could do commercial modelling. I’m too unique-looking,” she recalls. “I always had to prove that I could do this job.”

Before being hand-picked by Banks to appear on her show, Brown-Young was actively pursuing a modelling career in Toronto but couldn’t find her niche. “I was turned down by many agencies for castings and pushed more toward alternative fashion,” she says. Going in, Brown-Young knew that vitiligo might complicate her path, but she remained hopeful: “You can trump any barrier as long as you put your mind to it. I didn’t feel like it would stop me from achieving my dreams.”

Chantelle Brown-Young on the runway during London Fashion Week for the label Ashish and, right, at the America's Next Top Model premiere party in Los Angeles. Getty Images; Picture Perfect/REX

Myles Sexton, a Toronto jewellery designer who has cast Brown-Young in his past two shows at Fashion Art Toronto, an annual multidisciplinary festival, recognized her allure early. “Vitiligo or not, she’s stunning,” he says. “The fact that she embraces it … it’s almost like it isn’t there.”

To date, Brown-Young has yet to be signed by a modelling agency, but she has landed a major ad campaign with the Spanish label Desigual. In October, she will also appear on the cover of the inaugural issue of The New Era, a quarterly magazine co-founded by Sexton to highlight up-and-coming creative talent (and not to be confused with the identically titled magazine affiliated with the Church of Jesus Christ of Latter Day Saints). “When people see Winnie [on the cover], it’s going to open their eyes to the diversity that is in this world,” Sexton says. “We’re trying to promote the fact that there is more than stereotypical beauty.”

When Barry began working in the industry 15 years ago, other agents were often unwilling to take on clients other than ultra-thin, ultra-tall white women. “But if you look at boards at major agencies now, you’ll see more diversity represented, and a lot of new agencies in the past five years have begun specifically to represent diversity.” With a fan base already established and an ad campaign under her belt, Brown-Young, he adds, should have no trouble attracting an agent.

McKenzie, who served as a judge and coach on Canada’s Next Top Model, has a thorough understanding of what the industry values. “I like a girl who has something more than just a pretty face and a great body,” she says. Of Brown-Young, she adds: “She’s got dopeness written all over her.”

Of course, obstacles remain. Although most of the feedback on Brown-Young’s Instagram feed is positive, with other vitiligo sufferers expressing their admiration, the odd troll will scribble something nasty, a throwback to her school days. Brown-Young remains unruffled, though. “If they want to be haters, that’s fine,” she says. “I’m just myself. If you don’t like me, you don’t like me.”

Her future, though, seems limitless. “I just hope Jean Paul Gaultier sees her and she becomes his new muse,” Sexton says. “I think she could be the next big supermodel if she wants to.”