Lisette Limoges doesn't just wear the pants in her family. She reinvents them.

Using a similar technique employed for the making of women's bathing-suit bottoms, the Montreal-based fashion entrepreneur has revolutionized pull-on pants, making them fit and flatter any body type – including Oprah Winfrey's.

That's right: The queen of daytime TV is a huge fan of Lisette-L pants.

Over the past 12 months, she has worn a pair for three separate covers of her immensely popular O Magazine, the latest being the current February issue.

In October, Winfrey invited the Quebec-born Limoges to join her on the recent round of her The Life You Want tour, which attracted up to 22,000 people at a time in cities like Atlanta, Newark, Miami and San Jose. Her other guests included U.S. inspirational speaker Iyanla Vanzant, pastor Rob Bell, Eat, Pray, Love author Elizabeth Gilbert and philosopher Mark Nepo. But Limoges, also the only Canadian in the group, was the only one invited to be part of the travelling O Magazine lounge, a large tent in which 250 pairs of Lisette-L pants were given away to participants who had waited up to 10 hours to get inside.

Winfrey revved the crowd up when in one stadium-sized venue, she took to the stage to announce that she was wearing Lisette-L pants, calling them the most comfortable pair of pants she has ever worn.

You can't buy that kind of publicity.

"It's been amazing," says Limoges with her accented English on a recent visit to Toronto where the stylish grandmother of two was herself wearing a pair of her pants: a streamlined faux black snake skin style she had paired with a chic black shearling vest and high heels, her golden blond hair cut stylishly short.

"To say Oprah's interest in us has been a game-changer would be an understatement, " she recalls.

Sales for the made-in-Canada brand have grown 900-per-cent thanks in large part to Winfrey's enthusiastic support. Staffing has also has increased – from 5 to 65 employees – as has the number of accounts, from 300 in Canada to more than 5,000 stores across North America. New markets include Australia and New Zealand, where sales have doubled over the last year, and largely as a result of the O factor. "They love Oprah in Australia," Limoges says. "They see what she is wearing and they want to wear it, too."

He and Limoges together launched Lisette-L in 2003 after working together for 30 years as sales reps for other fashion companies.

Their retail clients had always asked them for a perfect pair of pants. When they couldn't find it, they decided to create it themselves.

"From the knee up all the pants are the same. From the knee down, they are wider, shorter, skinnier, depending on the style," says son David Small, who today also works for the business.

He and his father oversee sales while Limoges takes care of the pants, each season producing a diversity of styles, from boot cut to capri, which she embellishes with a signature D-ring attached to the front of the pants, just below the waistband.

"I want my name on the outside of the pant, not hidden," Limoges explains. "I want it to be something people notice as being Lisette-L."

If the goal is brand recognition, then the formula is working.

"We used to have five meetings, if we were lucky, over two days of appointments with editors in New York," her son adds. "Now we have between 25 and 35 each business trip, and we are talking to Glamour, Harper's Bazaar, Marie Claire, More and Redbook, all the leading women's magazines."

The tsunami of interest in Lisette-L has risen with Oprah, but it started four years ago when another popular TV personality, Kathie Lee Gifford, went unsolicited on NBC's Today show and held up a pair of Lisette-L pants to the camera, declaring to millions of viewers that they "fit like a dream."

Gifford had found her Lisette-L's by chance in a Key Largo boutique after Neil Small had driven his car south from Montreal to Florida in the hopes of drumming up more business for his wife's creation. He ended up getting more than he bargained for.

"We had no idea she was going to do that," exclaims Limoges, wide-eyed as she describes that first big break. "Our website was flooded with so many people trying to place orders that it crashed."

After Gifford, Winfrey is the latest celebrity to champion the pants. There may be more.

Limoges is aware that Hillary Clinton also owns a pair: "I just don't have a photo of her in them, yet," she says.

Other high-profile customers include Ivana and Ivanka Trump, a mother and equally fashion-loving daughter combo who represent a growing trend with regards to Lisette-L pants, which increasingly are appealing to consumers of all ages, young women and mature women alike.

"It's interesting," Limoges comments. "Because I originally made them for the older ladies, the ones who needed a little extra coverage, a little extra comfort in their dressing. It is why they are pull-ups, to make them easy to put on. But what has happened is that their daughters have tried them on, loving the fashion, and once they have tried them they love them. They don't want to wear anything else because they look so good on."

Priced between $90 and $135, and ranging in size from zero to 16, the wash-and-wear pants look so good on for a reason. Each pair is constructed with a hidden tummy panel that smooths and enhances a woman's natural curves, making her look fantastic no matter what her shape. "When a lady sits down in a pull up, usually you can see everything you don't want to see," says David. "But ours are designed to sit higher on the body and so it hides. It keeps everything in, the muffin top, the tummy...."

His mother, sitting next to him, nods her head in agreement.

"My big message," she interjects, "is you have to feel good about yourself. Try on my pants and you will feel good, and look good, on the outside. I can promise you that." 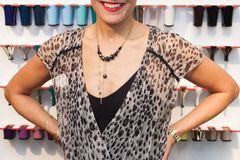 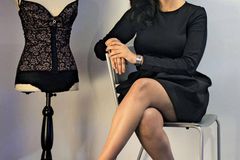 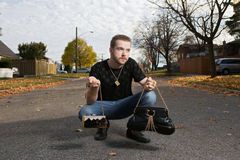 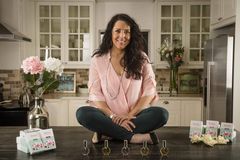