Not long ago, I got rid of the black lace dress by Karl Lagerfeld for H&M that I'd nabbed in 2004, when the Swedish retailer first collaborated with an established designer label. I wanted the dress because it was, by my tenuous arithmetic, the closest I would get to owning a little black Chanel dress (and still is). At the time it felt like winning a prize but for all the lining up, melee and sharp elbows I endured, I don't remember if I wore the dress more than once, if at all.

In the intervening decade, collaborations have become a marketing strategy to accomplish mass international awareness (ad campaigns, editorial features) for the designer while luring fashion-mad customers into stores, especially around the holidays. H&M's November sweeps is now an annual tradition. So much so that H&M's sister retailer & Other Stories is doing the same by partnering with fashion-darling labels like Rodarte (whose non-fashion collabs include a pixelated travel mug and bag for Starbucks) in an upcoming holiday capsule collection – the retailer's collaboratory prefix name sure comes in handy.

As most of these high-low partnerships speed by, they are exercises in recycling if not designers' greatest, then at least their most recognizable hits and theoretically turning them into marketing gold. Except they're everywhere, and everywhere the same. This season has already seen Thakoon for Kohl's (September) and Carine Roitfeld and Christophe Lemaire at Uniqlo (October), and the word collaboration has become no more meaningful than "wallet-friendly look-alike versions of their original work." The clothes may in name be more legitimate than the copycats available from another high street retailer, but maybe only just.

Even pairing luminaries or celebrities with fashion brands has become commonplace – actress Rebel Wilson and Torrid, model/designer Coco Rocha and Botkier handbags are just a couple of the almost too many to count – and sometimes seem merely transactional, like wrapping Beats by Dr. Dre headphones in buttery Fendi leather and calling it a collaboration.

With the help of Kardashian-fuelled buzz besting even the hype machine around last year's Alexander Wang for H&M, Olivier Rousteing's Balmain capsule collection lands in the mass-market retailer next month (worldwide Nov. 5) and will swell the ranks of the global Balmain Army, as the astute designer's famous fanbase is known. Spangle-encrusted dresses, shaggy faux-fur chubby jackets, and pearl– and bead-adorned knits for all.

This sort of collaboration is an act of commerce, not creativity – unless the challenge of translating signature handwork on a fringed beaded dress that typically costs anywhere from $4,000 to $20,000 into a credible version for $400 counts as creative. Before Kathryn Swartz Rees removed the inadvertently leaked campaign photos from her Instagram account (removed at H&M's request), I browsed the looks of the hotly anticipated collection. As in the past, the retailer's production capabilities and economies of scale work in their favour – the decorative soutache braiding looks poshly Balmain, at least in the pictures modelled by Jourdan Dunn and Kendall Jenner. There is nothing creatively interesting or unexpected; you may have to stifle a yawn.

In refreshing contrast, Art + Fashion: Collaborations and Connections Between Icons, itself a collaboration between writer E.P. Cutler and art editor Julien Tomasello, looks at various ways in which creative energy can be generated in true collaboration, when one medium, artist or designer meaningfully engages with another. The resulting artistic experimentation adds up to more than the sum of each respective part. Some are unlikely pairings, such as Comme des Garçons riffing on Matt Groening and the existential crises of his "Life in Hell" comic strip characters, others so odd it's brilliant, like Rei Kawakubo's 1997 "bulbous tumours of down" costume design work for Merce Cunningham's modern work – distended garments that influenced both the creative process and dancers' performance of the choreography.

Cutler and Tomasello cover just 25 such collaborations, primarily recent but a few historic ones as well, dating back to the thirties and Elsa Schiaparelli and Salvador Dali's lobster pairings, to get at how and why fashion and art should be the 21st century's reigning It couple.

The considered and copiously footnoted study of the mix between so-called fine art and commerce (fashion) also includes this gem from photographer Alex Prager, who like Robert Longo and Annie Leibovitz before her, was enlisted by Bottega Veneta creative director Tomas Maier to photograph a seasonal ad campaign: "Some of the greatest works of art were done on commission."

It's an argument against being precious about commingling fine art and commerce in collaborations – one further driven home by the theme choice of next summer's Costume Institute exhibition at the Met, "Manus x Machina: Fashion in an Age of Technology." The show sponsor is Apple.

Nathalie Atkinson: Thanks to the Internet, everyone’s a fashion critic
October 14, 2015

Nathalie Atkinson: Going back to basics is the secret to success for these fashion gurus
September 28, 2015 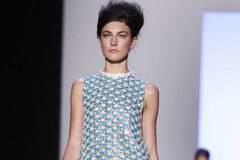