Just when you got comfortable wearing exaggerated, space-age shoulders, designers have gone off and added even more layers of finery. At Balmain, Christophe Decarnin opted for metal-encrusted epaulets, while Alber Elbaz added volume with sculptural ruffles to many a Lanvin dress. Then there's the novel shoulder pad-atop-jacket-or-T-shirt look from Pink Tartan's Kim Newport-Mimran. Give them a go: Just draw the line at football-style padding.

Clogs are giving the boot to gladiators, which reigned supreme as summer's must-have footwear for the past two years. Chanel offered milkmaid à la mode with soaring wooden beauties, while Gucci reintroduced the monogrammed style that was so popular in the mid-1990s. A more affordable choice is Swedish Hasbeens, a handmade Scandinavian brand that revels in 1970s quirk. Wannabe farm girls, rejoice.

First came barbed wire. Then it was zippers and studs. Now, Givenchy is blazing the way for spikes with a decidedly punk hair band that looked like Lady Liberty crossed with a pit bull. And spotting Rihanna's necklace that alternated pearls with spikes made Ryan Seacrest's New Year's Eve television special worthwhile. The message is clear: metalheads rule.

Let's all give a standing O to Phoebe Philo, the former Chloé designer whose maiden collection for Celine signals an exciting new direction for the French fashion house. In essence, she has reimagined the now-cliché notion of American sportswear - contemporary classic separates - with a fresh Parisian twist. So bring on the liquid leather tees and flattering wide-legged pants. Above all, expect her pared-back trench dress to spawn many a knockoff.

Before you start cringing, it's not exposed thongs that have made a comeback, but lingerie-like pieces more refined than racy. Think the peek-a-boo boudoir approach at Dior, the cheeky bras-over-T-shirts from Marc Jacobs and the bloomer twist offered by Canada's Joe Fresh. Best to proceed with caution, though: This look requires serious moxie (not to mention a killer bod) to pull off.

If you're wondering why models have looked so expressionless of late, it's not Botox: Their bleached eyebrows may be to blame. In what is surely the edgiest makeup trend of the season, Alexander McQueen, Gareth Pugh and Rick Owens are among the designers who featured faces with brows beyond the pale. Before proceeding with the look yourself, consider the inevitable downside: eyebrow roots.

From perforated leathers at Prada and Ezra Constantine to psychedelic scuba style at Proenza Schouler, fashion is riding a sporty wave for spring. This means that you can look cool and athletic without having to break a sweat, which is a good thing: You wouldn't want to ruin that pricey hooded vest from Balenciaga.

Given the ubiquity of ecru, alabaster, canvas, nude, powdery grey and a wide spectrum of washed-out pastels this season, could an anti-colour conspiracy be at work? After a long love affair with eye-popping hues (and the roller-coaster emotions of a gruelling 2009), we can chalk this more muted palette up to a desire for less intensity. It's about time: All that neon was starting to hurt our eyes.

Credit the perfume geeks whose scent-savvy blogs have helped to build interest in niche fragrances, which until recently were available only at high-end department stores. Now, such below-the-radar brands as Le Labo, L'Artisan Parfumeur and Frédéric Malle's Éditions de Parfums are opening boutiques from L.A. to Dubai. While they resemble mini art galleries, they are more akin to candy shops for the olfactory crowd (and amateur fragrance fans).

Listen up, pardners: This season's denim shirts have little in common with the western-style numbers you might see at a rodeo. The new pack, from the likes of D&G, is more Rodeo Drive. Think fitted, lighter-weight and even work-appropriate. Pair them with khakis, a tie and cardigan or even a suit, but do avoid what's known as the Canadian tuxedo - i.e., a head-to-toe denim ensemble.

Just as this season's fashion is rife with perforation, so too is the design world consumed with fretwork patterns. Barbara Barry's latest furniture for McGuire, for instance, features exquisite interlaced forms. Such designs are especially suitable for small spaces, offering airiness as well as substance

Hello, Dali. Although he died two decades ago, the surrealist master's influence is still very much alive, showing up everywhere from trendy Parisian interiors to funky tabletop items on this side of the pond (see, for example, Birks Living's silver goblets with claws and webbed feet for stems). The same goes for Henry Moore (whose sculptures are evoked by Frouwkje and Stéphane Pagani's sinuous new lamps for Baker) and Gustav Klimt (check out blugirlart's Klimt-inspired fabric at www.blugirlart.com). Clearly, artistry is always in style.

Arts and Crafts style may have flourished over 100 years ago, but it's getting a contemporary rework these days through the efforts of such design firms as Brooklyn-based UM. The studio, which is led by designer François Chambard, creates tables and credenzas combining futuristic shapes with old-world detailing. William Morris, the A and C movement's pioneer, stated that all furnishings should be both useful and beautiful. We think he would approve of the modern-day update.

Yes, the decade that nobody ever really liked continues to exert its influence. (Witness the release of Oliver Stone's Wall Street sequel scheduled for April.) In a, we hope, post-recessionary year, however, anything suggestive of Dynasty-level glitz would be entirely off-key. Rather, it's the bold, bright colours and nostalgic references that continue to appeal. Case in point: the Rubik's Cube pepper mill ($25 through www.thedrakehotel.ca/dgs). But does Erno know about it?

Ocean motifs have assumed a poignant new beauty in the context of our endangered seas. This may explain the vast array of seahorse prints, starfish patterns and sea anemone vases on offer this season. Not coincidentally, they work extremely well with 2010's colour of the year: turquoise. Just be sure to leave threatened species such as coral in their natural habitat.

Following in the footsteps of the fashion world, a wide array of intricately fashioned furniture designs, from Vancouver-based Omer Arbel's pleated 25 bench to Thai designer Nuttapong's dining chairs and ottomans made of overlapping seat belts, are showing a bent toward bends. More pleats, please.

Just like Tim Burton's Edward Scissorhands made topiary a must-have, the over-the-top director's much-anticipated Alice in Wonderland is sure to inspire interest in colourful interiors with outré twists. For appropriately eye-popping furniture, look no further than B.C. designer Judson Beaumont's fantastical clocks and cabinets, then add in some pale blue, some keyhole prints and of course a china tea set to complete the look. And if your decorator balks, off with her head!

From the Vancouver Olympics to the G20 Summit in Toronto, the world's eyes will be focused on Canada this year, so expect to see a cool rusticity dominate decor over the coming year. Sure, knotty pine wall panels and open stone fireplaces may be old hat to some of us, but the look has a timeless and now trendy charm. We especially like the Hudson Bay Company's fall/winter collection, which includes everything from axes to canoe paddles.

On the heels of a crummy 2009, it's no coincidence that the U.S. colour authority Pantone chose turquoise as its hue for 2010. In practical terms, the watery, calm-inducing shade pairs nicely with almost every other colour in the spectrum. More symbolically, it is, Pantone says, a colour that represents "escape to many, taking them to a tropical paradise that is pleasant and inviting, even if only a fantasy." Sounds good to us.

If there is a primary trend for 2010, it may be the "untrend." Now that design and decorating information is available through the click of a mouse, the dictation of design precepts by decorating elites is quickly becoming a thing of the past. As if on cue, the names of Sico's colour groupings this year reflect this democratization: One is called Back to Basics, while a second is Free Expression. 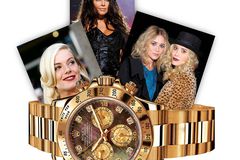 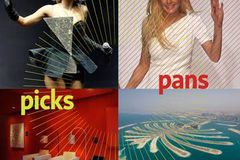 Follow Amy Verner,  on Twitter @amyverner
Report an error
Due to technical reasons, we have temporarily removed commenting from our articles. We hope to have this fixed soon. Thank you for your patience. If you are looking to give feedback on our new site, please send it along to feedback@globeandmail.com. If you want to write a letter to the editor, please forward to letters@globeandmail.com.
Comments