Having survived domestic violence, some women are steering away from police and the courts and trying a more unlikely avenue for closure: the very men who harmed them.

On Tuesday, a Twitter hashtag campaign titled #ShareMyVoice asked victims to tweet questions they would potentially pose to their abusers, as a way to heal. "Have you ever wished you could say something, on your own terms, to the person who hurt you?" read an invitation to participate in the interactive project, which is part of the online campaign leading up to A Better Man, a forthcoming documentary from Toronto director Attiya Khan, executive produced by Sarah Polley.

The film, set for release in 2017, sees Khan interviewing Steve, an ex-boyfriend who Khan says physically abused her daily for two years when they were teenagers. Twenty years later, Khan ran into Steve in Toronto and asked him to sit down with her to explain – on camera – why he had been so angry. Saying he wished he'd been "a better man," Steve, who is only identified by his first name but whose face can be clearly seen, agreed to talk about the way he'd treated her.

The excruciating conversations helped to heal Khan's trauma. She and other advocates believe that men who abuse women can change. They're hoping to facilitate the conversation. "I just wonder how much violence could be prevented, or lives saved, if we were able to get inside the head of the abuser," Khan says in the film's profoundly distressing trailer, which goes back to the night her ex-boyfriend chased her down a street, before a stranger in a pickup truck rescued her. It's a visceral scene, especially when paired with footage of Khan sitting down face-to-face with Steve years later.

"For many people, it's their dream: to be able to confront their abuser and get some level of accountability in return," said Julie Lalonde, an Ottawa woman who survived being stalked by an ex for more than a decade and who now manages draw-the-line.ca, a bystander intervention campaign.

"If you were to speak to a good chunk of assault survivors, they would tell you they didn't call the police because they didn't want him to go to jail," Lalonde said.

"They just wanted him to apologize, to take ownership and to promise never to do it again. For most women, we're not getting that through the justice system. Maybe this is the alternative."

Proponents of such restorative justice approaches say that when perpetrators are willing to be held accountable, such exchanges have the potential to heal survivors – and abusers – in a way that the criminal justice system is still largely unequipped to do. Efforts such as #ShareMyVoice are a version of justice that doesn't involve police or the courts, which many women feel have failed them.

Accountability is the goal. Last May, former CBC producer Kathryn Borel, a complainant in the second of two Jian Ghomeshi sexual assault proceedings, dropped her complaint and opted for a peace bond and an apology instead. "When it was presented to me that the defence would be offering us an apology, I was prepared to forgo the trial," she explained in a statement. "It seemed like the clearest path to the truth."

That's what survivors such as Khan and others are hoping to get through these non-traditional channels. The refrain Khan has been hearing from the survivors who have approached her is this: "I wish I could get honest answers to my questions from him." #ShareMyVoice helps women imagine what such a conversation would look like, and what the answers might be.

Women were asked what they'd like to ask their abusers and what might give them closure. Those who didn't want to tweet publicly were invited to fill out a private online form, up and running until Sunday, Aug. 14.

Their questions will be posed to men who have volunteered to own up to the partners they harmed as part of an interactive project running in tandem with the film.

To Diane Hill, senior director of public engagement at the Canadian Women's Foundation, a Toronto-based charity that aims to improve the lives of women and girls, the Twitter campaign is important because it starts to ask questions of perpetrators. The questions this time aren't "why she stayed" or didn't call police, but why men hit in the first place. It's a parallel to current conversations about rape culture: Instead of haranguing women about what they wore and how many shots they've had, we're starting to ask why some men rape.

"We haven't even started looking at the solution in terms of understanding why perpetrators do what they do, or creating a culture where all of the questions go to them instead of to the victims," said Hill, who has counselled assaulted women.

Hill does add, though, that for all its healing potential, there are also substantial risks to this restorative justice approach. "It may not provide the closure you expected. You may not get an apology," she says. "Some people will never admit that they've done anything wrong and will continue to blame the victim. It's important that people have the support they need going into whatever process it is, to manage their expectations and ensure that it works for them, despite the end result." (The facilitators of Tuesday's Twitter chat were aware that these methods aren't for every survivor: They tweeted instructions for muting the conversation online and also offered a free helpline.)

On the flip side, some perpetrators may falsely assume that getting things off their chests will automatically preclude them from ever being violent again. "It can't just be a perpetrator of abuse saying, 'I'm going to tell my story now and that's going to make everything better,'" said Todd Minerson, executive director of White Ribbon. The organization of men and boys combats men's violence against women, and helped fund A Better Man.

Minerson said such conversations have to be a part of a longer, meaningful process of rehabilitation for abusers, many of whom have been abused themselves. But he does believe that #ShareMyVoice can help to pull back the veil on what abuse really looks like. "We put blinders on to think that abuse is extreme, near-death violence. Here, survivors are allowed to ask questions like, 'Why did you feel you needed to control my looks?' or 'Why did you take control of my phone?' " he says. "There's a spectrum of abusive behaviour. We know that these are indicators of a pattern that can only escalate."

Importantly, the campaign also asked victims what they'd like to have said to their abusers' families and friends, people who often turn a blind eye instead of intervening. "We're so reluctant to see it in the people that we love and care about," Minerson said. "We're breaking down stereotypes that perpetrators of violence against women and girls are 'monsters' – not the men and boys that we know and love. More often than not, they're everyday guys."

Ultimately, A Better Man and its Twitter campaign this week stick to the difficult question: Why do men hit women? For the lucky survivors who get the answers they are looking for, such restorative justice processes can offer tremendous healing.

"There's a level of catharsis in imagining what it would look like to go to coffee with someone who did such incredible harm to you, and from whom you have had no answers," Lalonde said. Her abusive ex-boyfriend stalked her for 11 years. When he died in a car crash last summer, Lalonde was released from the torment but also forever denied a chance to ask him these important questions.

"If someone is able to own the fact that they are or have been abusive, to be a part of a two-way process where they're able to share what they were going through when it happened, how they've processed it, how they want to move forward in a healthy way – that's how I wish all cases of violence were addressed."

Alberta MLA Maria Fitzpatrick: ‘Attitudes have not changed enough to make domestic violence a thing of the past’
November 25, 2015 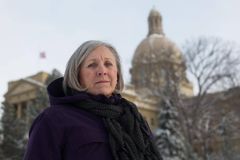 Trigger warnings are the least we can do to help trauma survivors feel safe
October 16, 2015