I think I might be a “Karen.” My husband didn’t know what a Karen was. If you don’t know either, I’ll put it another way: an entitled white woman who wants what she wants.

The global pandemic has made many people more patient much of the time. It has made a few people anxious and jittery, and some people, who were self-righteous to start with, have been rendered impossible.

I think my own behaviour has been quite good. Occasionally I have been lost in thought and someone on the sidewalk has had to veer away from me. I developed an unhealthy obsession with seeing the baby foxes in my neighbourhood but I did not resort to dog treats to lure them out and I did not loiter near their den. But I did make a point of walking by their den twice a day until I finally go for my iPhone money shot. (In my defence, the mother fox did choose to have her kits under a major walkway adjacent to a dog park.)

I work hard to not be a “Karen.” I stand patiently in line at the grocery store, I offer my hands for the spray-on sanitizer with a smile on my face. I thank the check out people profusely and try not to touch the fruit. Sometimes I do touch the fruit. For that I am sorry.

Recently, one beautiful day I went for a leisurely stroll to get a cup of coffee from an iconic Canadian coffee shop that was recently sold to a Brazilian private equity firm. I arrived at the coffee shop that is sometimes associated with a long dead hockey player, and found there was a lineup outside the door. I stood in line and made cheerful banter with the handsome man who was standing two-metres apart from me as per the COVID-19 rules. In my neighbourhood we say three Canada Geese away, as someone must have thought that seemed more friendly. I despise Canada Geese so I prefer two metres. I got into the coffee shop and there were still five people ahead of me in line. There were also three young children in a stroller. I guess their caregiver felt the risk of COVID-19 was less than the risk of abduction. The line did not move. There was a tremendous amount of activity happening behind the counter but everything being made was intended for someone else: someone sitting at home waiting for their Uber Eats driver to arrive.

I wonder why people order food to be delivered from coffee shops? Actually, the food makes sense, but the coffee? Won’t it be cold by the time it arrives? How do the drivers prevent the coffee from spilling all over? What happens when the order goes in and the person behind the counter has no sesame seed bagels? Do they substitute a different kind of bagel? I can successfully substitute bagels for my husband but I’ve known him for 25 years. I would never have the confidence to do it for a stranger.

I stood patiently while the coffee shop staff worked hard to fill orders for the waiting drivers – I was grateful I could enjoy a peaceful moment to look at my e-mails. Ten minutes passed, then another seven. Unfortunately, the child minder’s order had been taken, which meant she had to wait. Finally, after 22 minutes, the bearded man next to her spoke up on her behalf: “She’s just waiting for three doughnuts!”

At the 25 minute mark I got to the counter and said to the young woman that while I knew it was not her fault, this system was not working. I told her she needed to tell her manager that you cannot treat your in-person customers this way. She pointed out the manager to me. At that moment I realized, I was being a Karen! I mumbled something and slunk away … to wait for another 10 minutes for my small coffee with one cream. From the time I paid to the time I received my coffee was an eternity, or 10 minutes.

I was embarrassed by my complaining – the handsome man who had witnessed my Karen behaviour was Black. I was a parody of a white woman who wants what she wants when she wants it. I was polite but my dander was up and I’m sure I had adopted a schoolmarm tone. But I have to cut myself some slack because I wasn’t wrong. The system was unfair, the orders that were called into the coffee shop were given priority over the human beings who were standing in line, some behind masks, waiting patiently for the exquisite brown elixir that costs $1.62 if you order a small.

The handsome man standing next to me and I shared a glance when I finally got my coffee. We had a bemused moment of, “Can you believe how long it took to get 8 ounces of liquid?” Or at least I thought we were bemused. It’s also possible he was thinking that I was a Karen who needed to get her priorities in order.

I will be giving this particular coffee shop another chance tomorrow and probably every day for the foreseeable future. Certainly during our COVID-19 lockdown when time has lost its meaning, I will stand patiently waiting 35 minutes for coffee. Let’s see if I can hold myself in check and control my impulse to tell them “This Is Unacceptable.”

I’m angry and impatient all the time: Has social media changed me forever?
October 27, 2019 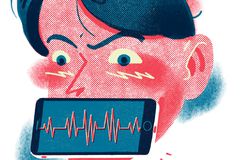 Sometimes, you just have to open your heart (and your home)
December 3, 2018 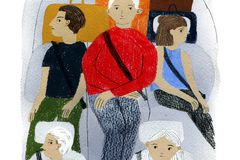