My 10-year-old grandson asked me where the button for the butt warmer was in my car. This required the honest answer that there was none, as the car was older than he was, a concept difficult for both of us to fully comprehend. He also complimented me on the flowers growing out of the cracks in the back bumper. I hope I remembered to thank him.

Within a month, the muffler went and then the battery. I replaced both, not moves I am especially proud of – not good fiscal decisions, throwing good money after bad.

Another month and the driver’s side door would not open more than two inches. I am not young and not small and my days of climbing over gear shifts are long gone. The time had come, after 11 years, to acquire a new car.

I am not a car person; I do not appreciate their fine workmanship or roaring engines. I cannot distinguish one from another and would be an appalling witness to an automotive crime; on a good day I might remember the colour, but not whether it resembled a Maserati or a Bentley or a Kia. The purpose of a car is to get from here to there safely. There is no ego in vehicle.

It was a relatively simple task to trade my old black Honda Civic for a new black Honda Civic. Monthly payments organized, I drove off, wondering why the salesman had been so much nicer to me while I was negotiating the lease than he was after we were finished. He did give me a lesson in how to work the new gizmos that Honda had procured in those 11 years.

One part of the acquisition that excited me was Bluetooth: no more fiddling with my phone while furtively avoiding the police while trying to figure out which grandchild I was to pick up from which activity. No more surreptitiously looking down when my eyes were meant to be straight ahead. I had seen the ads. I was going to sit like a lady and announce to the system what I wanted and it would comply. I was in awe of my new toy and eager to try it out.

“Call Jessica Yaffe,” I requested, and waited until I heard the voice-recognition beep.

I waited. No beep.

“Call Jessica Yaffe,” it repeated, adding: “There is no such person.”

Interesting. For 38 years I thought she was my daughter. I distinctly remember giving birth to her and taking part in naming her.

Maybe her phone was off? Shouldn’t I at least get her voicemail, not that she ever listens to it. Next kid.

There is no such person, I was told.

Funny, I remember his birth, too.

“We have no daiquiri Yaffe.”

Then I had an epiphany. Abbreviations!

“There is no Jack Yaffe.”

I have some talents and I have always believed that elocution was among them. I have that voice that can be heard in the produce section of the grocery store even when I am buying bread. The entire world knows where I am at most times. Had my new car became a metaphor? Was this the old story of my never being correctly understood?

Years ago I had a case of laryngitis that would not disappear. I traipsed from doctor to doctor and tried a variety of odd remedies that did not work. After several months and the conviction that of course I was dying, I agreed to see one last doctor, the guy not recommended as he was so “old school.” He listened to my complaint and told me that I “spoke as if no one was listening.” He showed me how to modulate my voice and, poof, I was fixed! But, maybe, Mrs. Bluetooth liked my old voice better.

“We have five Yaffes. More specific information is required.”

Was I on Jeopardy?

“Call Zach Yaffe.” I repeated, about to throw something at the screen.

One child left to go.

“There is no Abdul Yaffe.”

It would be an odd name, I agreed.

“There is no spaniel Yaffe.”

I have never been a lover of dogs. Evidently, I had no children. Or dogs. This had to be a joke. When was the guy from Candid Camera going to appear? Maybe that salesman had set me up. Surely not everyone with a Bluetooth system feels a need for six Valium upon using it.

I have been accused of having a closed mindset, that I like to do what I know how to do; I am working on changing this, occasionally getting out of my comfort zone. I was not giving up. When my children used to ask how they would know what to do in a particular situation, I always reminded them that they had mouths and that asking for help was a good thing. Speak up! Use that voice!

A brainwave. I would call the salesman!

Was it too late to return and retrieve my old car? Had they made it into scrap yet? Suddenly climbing over the gear shift didn’t seem like such a big deal. At least it didn’t make me feel ignorant.

In the famous Italian novel, The Leopard, Giuseppe Tomasi di Lampedusa writes, “If we want things to stay as they are, things will have to change.” I read that book a long time ago but I am not certain I ever really understood the theme until now.

Complaining about newfangled stuff that I can’t figure out will get me exactly nowhere and I shall remain a woolly mammoth.

I worked on it for a few days and I now declare myself a Bluetooth master. Try me. I’ll call you back from my car. 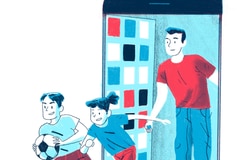