Mom came to live with me a year ago November. It seemed somehow surprising, but there she was, sitting in her chair in my den. I put my life on hold to care for her.

Each morning, I got her up and dressed. I made her oatmeal, and sat with her for hours watching CNN. I rushed for a bowl when she felt sick, and lit fires to keep her warm while enduring my own hot flashes. I checked blood sugars, gave insulin, coated her ever-cracked lips with balm and provided a never-ending supply of ice water. My arms became the walker she refused to accept. I cooked and persuaded her to nibble a few bites. I changed the dressings on her bedsore, gave her enemas, washed every last part of her in the shower and supplemented her waning strength as she climbed the stairs to bed.

I wondered – would all this be easier if I were merely her daughter and not also a doctor? A daughter would certainly see her weakening, her diminishing, her fatigue and her pallor. A daughter wouldn’t miss the leg swelling, the loss of appetite and the incoming tide of sleep, which consumed more hours with each passing day. But a daughter would surely also be cheered by the kindness and encouragement of the chemo nurses and doctors, the prayers of family and friends. Wouldn’t a daughter sustain hope, and then go looking for other possibilities when conventional treatment failed?

One day, I took my optimistic, ever-hopeful mom to the cancer clinic for an appointment and treatment. “I’m feeling a bit stronger,” she told the oncologist. Her pain was better, her appetite pretty good. She completely missed the looks passing between the doctor and the doctor-daughter. There’s a knowing we doctors share: This was not going to end well.

Mom was 83, fiercely private and independent, her childhood marred by poverty and other harshness she rarely spoke of. She hadn’t even admitted to being ill until the previous spring. She’d lost some weight, but unbeknownst to me, her doctor-daughter, she’d also become anemic, dropped out of the choir she loved, had multiple rounds of blood work, an endoscopy, colonoscopy and CAT scan. There was a small mass on her left kidney, she finally confessed.

But it wasn’t small, and it was growing into her major veins, forming big blood clots that could have dislodged and killed her at any moment. Surgery was urgent and radical, the scar as wide as her abdomen, but within weeks, she was back on her feet. She rejoined the choir, determined to sing in the Christmas concert. Yet a nagging pain in her lower abdomen made her increasingly miserable, and finally another CAT scan confirmed that damned tumour had spread everywhere. So, she left her home of 40 years and came to live with me.

Although kidney cancer doesn’t respond to chemotherapy, a newer treatment called immunotherapy promises a 40-per-cent response rate. I clung to that number as a daughter, but the doctor in me was all too aware of the corresponding imperative: a 60-per-cent failure rate. It’s what I saw as her weight rose from fluid retention, even as her muscles wasted away and her strength declined. It’s what I desperately tried to judge, as my sister and I pondered getting the grandchildren up for one last visit.

It’s a hard job caring for a sick or dying parent, whoever you are. For a doctor-daughter, the roles can get muddled. Physicians need detachment, yet being a daughter presupposes attachment. The doctor in me saw her distended abdomen, and considered the medical causes of vomiting up bile, none of them good. The daughter in me teared up as she told old friends she wasn’t doing well, exhorted them to have a good life and assured them of reunion in heaven. Either way, it amounted to the same thing. She was dying. And living. The two of us there just being, for the moment. And “just being” proved surprisingly exhausting.

There are all kinds of fatigue in the world these days. There’s donor fatigue and voter fatigue, even Trump fatigue. And then there is compassion fatigue, a common affliction amongst caregivers, who are often daughters. For some, the cost of caring can lead to loss of the very empathy and compassion needed to keep caring. Apparently, doctor-daughters are not immune.

Some mornings, I couldn’t find any clean clothes for her, though I did plenty of laundry. Some evenings, I was up and down the stairs five or six times before finally getting her settled in bed. I would forget the insulin pen. Or the needle for the pen. She needed more Tylenol in the dish beside her bed. A cup of fresh water, a heating pad or lighter blankets … sometimes, I wondered if I was losing it. Losing my patience, losing my kindness, losing my mind?

“You are eligible for some respite services,” the home-care nurse announced one day.

“Oh, I don’t think I need that,” Mom said. But the respite wasn’t for her, it was for me, and I’d take it, if we manage to outlast the waitlist. Unfortunately, we didn’t.

Immunotherapy didn’t work, and finally our lives became about comfort. Still, Mom remained stubborn: “If I start taking morphine,” she told me, “it’ll be the beginning of the end.” But in this matter, the doctor and the daughter in me were at one. Neither of us would see her suffer. Mom herself was finally convinced by the pain.

Illness and need took us across personal boundaries I’d never before considered. And yet, while living and being and dying with Mom these many weeks, I witnessed something precious dawning. Deeper intimacy. Memories forged. A glimpse of new ways to live and be, depths of patience previously unknown, compassion fatigue evolving into compassion satisfaction. A powerful sense of the brevity and fragility, the pain and joy that is life.

And I live on, enriched by all that transpired since Mom came to live with me.

After raising four boys, it’s time to choose my own adventure
December 11, 2018 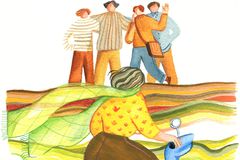 The Advent event that taught my kids an important lesson
December 11, 2018 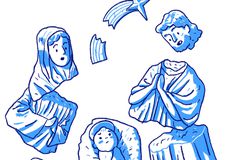 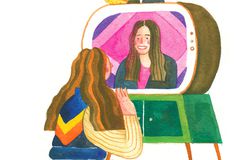