I look up from the sidewalk’s inky blotches to the gangly trees. Bunches of berries tantalize in varying shades of cherry red to midnight purple.

“You know what those remind me of?” I ask Karen, who was born in Saskatoon. (I moved here from Edmonton – we’re two Western Canadian gals who have become Toronto city-dwellers and dog-park friends.)

“I was thinking the same thing,” Karen says. “Saskatoon berries. But those grow on bushes.”

Of course, we both picked them as children, for our mothers’ pies.

“They call them serviceberries here,” I tell her. “Do you think Saskatoons grow on trees, too?”

“Well, they wouldn’t plant poisonous trees near a playground.”

And with this wise observation, we pull down a branch, while the dogs pant in the heat. I pick a few, and bite each one. The inside is greenish-violet, and the little crown is a giveaway. But I spit them out in fear.

The berries send us into a spiral of overthinking for several days.

“I’m not eating that pie,” Karen’s husband says. “What if they’re poisonous?”

But something deep, unconscious in both of us, needs them to be Saskatoons. Karen and I are almost strangers, but we understand each other’s desire to relive our childhood, to pick berries in the wild west and to eat our mother’s raw pie crust.

So we take out our iPhones.

I am a 21st-century Luddite, and proud of it

Life ain’t easy when your last name is Dick

Dad’s old toolbox tells me so much about his life

We take pictures of the berry trees. Karen has an app that identifies plants. It lists serviceberries as one potential, but not the only one. Inconclusive.

I call Jan, my neighbour and volunteer that helped choose the trees years ago.

Well, she’s not a Prairie gal, but she did give us the gift of those trees.

I find blogs and recipes online, from the likes of Mother Earth News and Lost Recipes Found, written by people who are disappointed that the public doesn’t know that serviceberries are edible and contain more protein, fibre, calcium, magnesium and manganese than blueberries.

I send a pie recipe to Karen.

“We need four cups. And a ladder.”

We want to make the pie. We really do. We also want to share it with our dog-park friends and husbands. They remain unconvinced.

We’re still as unsure as our husbands. We’re just not saying so out loud.

Time to pull out the big guns, as they say in the West. I send a picture to my friend who runs the Toronto Botanical Garden horticulture department.

“It’s hard to make out with the resolution of your photos," Paul writes, "but they look like serviceberries. Are they still fruiting? My plant at home and those at the Botanical Garden finished fruiting.”

I race to the park to take close-up photos.

Our research exhausted, we take the leap, the six-foot A-ladder and a stainless-steel bowl to the park.

The berries are sticky and our fingers turn purple as we straddle the branches, giggling like the children in the adjacent playground. A few curious passersby carrying tennis rackets ask what we’re doing. Making pie, we tell them.

Paul answers through e-mail. “That is them.”

And with those three words, we are allowed to relive our childhood.

We agree to not use lard. There’s something about rendered pig fat. Karen arrives to my kitchen prepared with recipe printouts from The New York Times for a butter crust that “banishes all fear,” and ideas for the filling from Prairie blogger Kitchen Magpie. Her vast research also yields “How to make a lattice top for a pie crust.”

Our mothers are laughing in heaven. They had a sixth sense based on weather patterns and how the dough felt in their hands. We have technology.

Karen rolls the crust out like a pro, surprising herself. Divine intervention, we agree. She tastes the raw dough, pretending to understand what she is checking for.

“Tastes perfect,” she says confidently, “although I’ve only made five pies in my entire life. Maybe less.”

We resort to a YouTube video for the crust edge, choosing pinching over crimping. The pleats are a little large and jagged. Rocky Mountain-esque, actually, but way better than a lazy fork crimp.

Dogs and dog-owners attend the Park Pie Picnic. (We shared the verification from our horticulturalist.)

The pie is warm. The blanket of emotion is warmer.

Silence, as everyone chews in peace. The delectable berries softened as they baked, but kept their shape, and have a slight almond flavour. The ice cream melts into a creamy pool around the flakiest crust ever.

For those few minutes, we’re no longer city dwellers who are suspicious of everyone and everything, even that which we recognize, like a kindly visitor lost in the neighbourhood or a berry that lives in our hearts. We are reminded, by a slice of life, to trust our natural instincts and to accept our unconscious intuition and our memories. To trust ourselves. 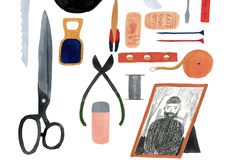 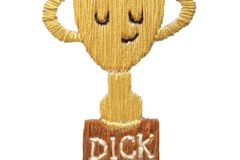 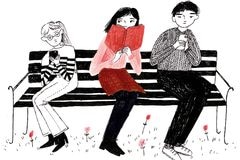