It is with some reluctance but great clarity that I must inform Your Majesty our once close, now rather distant, relationship must come to an end. In the much overused parlance of the day, it is time for a Canexit.

In other words, Ma’am, as your reign is drawing to its inevitable majestic close and your son and heir Prince Charles stands poised to ascend the throne, the timing is right for you to advise the Canadian government that it would be a most favourable moment for Canada and the British monarchy to part company – amicably and with the greatest of good wishes bestowed upon both parties.

Your Majesty will suggest to our Prime Minister that as the reigning monarch of Great Britain and 15 other countries, it is high time for the constitutional head of state for this country to be entirely Canadian with no acknowledgment of, or responsibility to, the British crown. And that the process for setting this in motion should proceed before you leave the throne, not afterward.

Before Your Majesty assumes that I am some youngish, wet, left-leaning liberal, let me assure you that I am not. I am, in fact, a conservative-leaning, 82-year-old Canadian-born woman, raised as an Anglican, who spent the first decade or so of my church-going life on my knees each Sunday praying for the entire Royal Family (when such prayers were incorporated into the ritual as laid out in the Book of Common Prayer).

As for timing, I suggest that now is the right time, while Your Majesty still sits on the throne and before Charles is thrown into the hurly burly of taking on the burdens of the top job. Because believe me, Ma’am, he will not enjoy the furor and ignominy associated with the shock Canadians will experience when they realize it will be his face on our $20 bills, not yours. And his name to whom Canadians will swear allegiance.

By taking the initiative, stepping down from your role as Canada’s head of state before the monarchy changes hands, your loyal Canadian government will be released from a most onerous task. For our government to act after succession, suggesting the newly crowned British monarch is redundant to the needs of the Canadian people as head of state, a complete political nightmare, constitutionally speaking, ensues. All the provinces would have to agree (and they hardly ever agree on anything, even when it is in their own self-interest to do so!) and the whole miserable issue would be tied up in hot debate and red tape for months – if not years – on end.

During this period, an increasingly confused and irritated Canadian public will be asked to choose one of two alternatives: the artifice of pretending there is still a substantive reason for Canada to acknowledge the reigning British monarch as our protector (the current embarrassing situation) and soldiering on with Charles as King of Canada and head of state; or fear of the unknown, the dreaded American-style republican alternative. A reasonable third option – and there are other options – may not even make the table for discussion in this heated atmosphere.

In any event, the whole thing will turn out to be a hot mess. Worse still, views will also be expressed in ways unfavourable to Charles, whose public image in this country, regretfully, is a shade less glowing than your own. So, better, much better for a future King Charles and the monarchy itself, if Your Majesty were to take the long view and act now. Insist that the Canadian government accept your resignation and let us move on.

Oh, there will be outpourings of grief from the handful or so of fervent royalist Canadians, but many more will take this in their stride, agreeing that a complete detachment from the British throne is the only logical outcome for this country and, quite frankly, wondering why it took so long.

As for your own people, Your Majesty knows full well, painful though it may be for you to admit, the great British public (your royal offspring as well, I suspect) don’t give a rat’s rear end for countries outside of their island kingdom, Canada included.

And may I remind Your Majesty you’re a whiz at making difficult decisions and disposing of dubious attachments that, in your view, threaten the well-being of the monarchy. I’m quite confident your British subjects will give you lots of leeway in chucking Canada, particularly if you make the point that, like Harry and Meghan, we also live an ocean away from Great Britain to whom our attachment may be historical and cultural, but is now mainly fragile and ceremonial. The truth is Canada is fundamentally North American and our ties to the United States are, in comparison, much more compelling and visible. In the eyes of most Brits, we are, accents and all, indistinguishable from the unloved although envied Americans.

We in Canada know that’s not true. Sufficiently confident in our own culture, we no longer fear being swallowed by the American behemoth. And because of that confidence, we no longer have need for a constitutional attachment (no matter its mere ceremonial implications) to another country or its monarch despite that country’s rich culture and magnificent history. Ours may be thin milk in comparison, but it’s our thin milk and we prefer to drink it.

So, this is farewell, Your Majesty, from a loyal subject, who wishes you continued good health and well-deserved contentment, a loyal subject who was once a little girl lustily singing God Save the Queen for the first time at school on the morning we learned that your father, the King, had died. The same little girl who treasured the letters from her father written on thin blue paper sent from England during the war years he spent there with the RCAF, whose service there contributed to his untimely death two years later. Please know that though I mourn his death, I do not resent his sacrifice and service. I respect and honour it, just as I do yours.

Finally, may I say Ma’am, I truly believe that one day your eldest son, Charles, will make a fine king and serve his country to the best of his ability. I wish him well, too. But it just won’t be my country he’ll be serving. Neither will he be my king. Only 8.5 per cent of the Queen’s household staff are from ethnic minority backgrounds, statistics reveal
Subscriber content
June 24, 2021 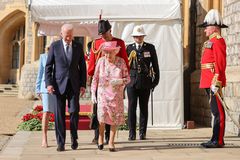