All through elementary school, I had only one close friend. We spent our formative years together, essentially joined at the hip. Yet when Greg moved away, I doubt either of us stopped for an instant to wonder if we would ever meet again. Over time I began to realize how important our friendship had been, but it would take more than 50 years and an extraordinary set of circumstances to bring us together again.

As children, Greg and I dove into everything with gusto. When we called on one another, we didn’t knock or ring the doorbell – we hollered “Kee-Yaw-Kee” at the top of our lungs. We practised wrestling moves with the same melodrama executed by the likes of Sweet Daddy Siki and Killer Kowalski, who we watched on Stampede Wrestling. We cobbled together a pushcart for the soapbox derby and called it Sour Cream after the tin lids we installed as headlights. We raced to and from school on our bikes, raised homing pigeons, belonged to Cub Scouts, illustrated our own comic books and collected postage stamps from around the world.

Together, we were swept away by Beatlemania. When A Hard Day’s Night premiered at our local theatre, we arrived before sun-up to be first in line. Aspiring rock stars ourselves, we had already recorded our “first single” on my portable record player by pressing the needle into a black-licorice ’45 candy and singing loudly as it revolved. It didn’t work, of course, so we devoured it, fulfilling its true purpose in the process.

While Greg wore horn-rimmed glasses and was dubbed “specky-four-eyes,” I was chubby, freckle-faced and sported disproportionately large ears, so we endured teasing together. Unfazed by our shortcomings we became enamoured with the same blonde girl from around the corner, a sixth-grader named Joanne who barely knew we existed. Once, while performing stunts on our bikes in front of her house, Greg fell off and split his chin open. Joanne didn’t hear him cry, but I sure did, so I cried, too.

The last I saw of Greg was some time in 1966. It couldn’t have been a particularly momentous occasion. I can’t recall saying goodbye or even being told he was moving. By the time I entered high school that fall, Greg was no longer top of mind, though he did re-emerge years later as a bratty character in stories I concocted for my young children. They pled with me to search for Greg, if only to prove that he wasn’t just a make-believe resident of my tales. But I was content with my memories and felt it would be quite a challenge to find him after such a long time.

But then, a few summers ago on a patio café at the lake, I saw a woman who looked vaguely familiar. I felt compelled to pursue my hunch. “Excuse me. Would your name happen to be Joanne?”

She tilted her head warily, “Uh, yes … it is.” There wasn’t a glimmer of recognition, though, until I explained who I was. We hadn’t exchanged more than a few dozen words in our entire lifetime, but there we now stood, chatting amiably about our school days and our old neighbourhood. Then, as we were about to part, she touched my arm and asked, “Have you stayed in touch with Greg?” I was surprised she even knew of our friendship.

All the way back to the cabin my grown children, whom had been nearby during the conversation, nagged me to reach out. I finally conceded. “All right already,” I said, “after our holiday.” And I think I meant it.

Back at the cabin I sat down with my phone to check for messages. I glanced at my one e-mail, then read it from start to finish. It didn’t quite sink in before I accused my children of pulling my leg. It took a few moments to realize that it was no trick – the e-mail was from my childhood friend, Greg. A shiver started at the nape of my neck and spread down my back as I read it again.

Greg explained that he had tracked me down through my children’s social-media links. His father had been transferred to Winnipeg in 1966, then to Edmonton a few years later. There, Greg had become a musician and small-business entrepreneur, he married thrice and had two children. We exchanged several e-mails before connecting by phone a week later, our once familiar voices altered by the fog of time. A month later, my wife and I drove to Edmonton to meet Greg and his family.

Standing at his front door, I felt a bit unsure of what to say or do. So much time had passed it felt more like a blind date than a reunion. But after hugs and introductions, the years dissolved and the hours passed as we reminisced and exchanged stories about the lives we had lived. I had brought along the only picture I could find containing the two of us – from my sixth birthday, it showed a group of youngsters huddled around a table with a cake in the centre. With his gaze transfixed on the photo, Greg raised his arm and handed me a tattered little card. And there, signed in faded blue crayon, “From Donnie,” was Greg’s invitation to my sixth birthday party.

There were a few other keepsakes shared that evening, but none as poignant nor befitting the occasion as the invitation and the snapshot, two unlikely survivors of days gone by, companion pieces stored apart and somehow saved for the reunion of two old friends. 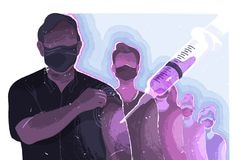 How the Barenaked Ladies got me through my mammogram
February 18, 2021 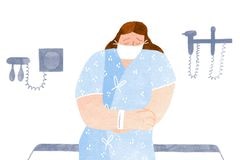 A song I barely knew unearthed a memory I thought I’d forgotten
February 17, 2021 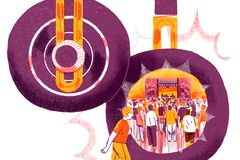