My vegetable garden has always been and remains a tranquil, good-news-only, self-isolating refuge I share with nature.

Years back when I started gardening, our beloved backyard neighbour, Stan, made it clear he hated crows. He disliked the sounds, look and all things associated with what he called “the vermin.” As fate would have it, from spring through late fall a murder of crows took refuge in the towering Douglas fir that separated our properties. They cawed, dive-bombed his ancient cat, and made grating, repetitive coos whenever he came outside.

Like a gruff bear lumbering out of hibernation, every spring Stan took a break from his intricate model-ship building and directed his military work ethic toward tending his garden. Plunked in the middle of his garden was his reincarnated scarecrow that dangled from a stake. A red plaid shirt was stuffed with rags to resemble a human form, cuffed jeans hung down to the black tilled dirt and sleeves that flapped in the breeze were part of the Navy Seal tactical manoeuvres he employed to deter his nemesis from his Victory Garden. Even though he employed backyard espionage and shot booming blanks high into the tree, the crow attacks and caw-caw-cawing never subsided.

The crows and their petulant cries became synonymous with late spring and summer. For a good five years, my two boys were given a hammer and bucket of nails to build a fort under that fir tree. Each year the fort grew in complexity and each year the crows’ crescendo grew louder. I often thought my children’s playing was far louder and more demanding than our feathered friends.

But then one sad fall day Stan died and within a week I noticed the fir tree had fallen silent. It was as if the crows knew of his death, had attended his memorial, watched the slide show of his life, sampled Nanaimo bars at the wake and moved on. Eventually the house was sold and his widow relocated, but the boisterous crows never returned. The stillness was like a radio that you don’t notice until it is turned off.

I had never thought to become friends with a crow, to identify one black bird from another, until one returned to the fir tree. This crow was hard to miss as he had an injured white feather that jutted out at an angle from his right wing.

My relationship with “Mr. Crow,” as I have come to call him, cautiously evolved. At first, my feathered friend visited our back deck to polish off the cat’s food. At some point, Mr. Crow and I exchanged looks and we created a bond.

I started a morning routine of coffee and feeding the animals: the cat’s bowl on the floor, the bird’s bowl on the deck’s top railing. This way I could savour my coffee and the crow’s hopping, pecking and cawing ballet. Eventually a smaller, less boisterous, perhaps female partner was reticently included in the sharing. A few times I left a shiny button that was replaced with a pine cone or stick. If I heard cawing from the verdant green fir, I talked to the swaying treetop branch – behaviour my next-door neighbours viewed as interesting but peculiar. If I gardened in the front yard, Mr. Crow perched from the telephone wire and made his opinions known. On hurried mornings when I neglected to provide a meal, he tap-tap-tapped on the deck’s sliding door as if to say, “Hey, you in there? Have you no conscience?”

Like my rascally friend, I was as curious about him as he seemed to be about me. Flipping open my computer I learnt that crows, along with ravens, are part of the corvid family, one of the smartest of the birds. Crows are considered the Einsteins of the North American bird world and perhaps more intelligent than some primates. Years ago in Tokyo, when a power company dismantled crow nests that interfered with power lines, the birds soon built decoy nests to stop the destruction. Corvids are among the only birds that, like humans, create their own tools to feed themselves. Crows have made probe-like tools out of twigs to catch or impale larvae. This is an impressive feat for a bird. Crows could be taught to interact with a “crow vending machine.” By dropping money found on city streets and sidewalks, the crows’ efforts were rewarded by the appearance of a tasty peanut to eat.

Although I am smitten with Mr. Crow and his partner that join me in the garden, it seems crows have become the bird, along with the cooing pigeon, that people love to hate. Various superstitions consider the crow an omen of mystery and death and the loud racket produced by a murder of crows is synonymous with Alfred Hitchcock’s horror film, The Birds.

As our world moves on, however, I propose we embrace a new relationship with crows and all backyard urban wildlife that endure. Like humans, they have proven adaptive and extraordinarily clever in the face of dramatic change. It is a time to put out a peanut, sprinkle some birdseed or occasionally glance skyward and appreciate our outdoor friends. If nothing more, they are creatures that, like us, are working to find their way on this resilient and remarkable planet we share.

I’m a visible minority in Toronto but didn’t feel like one till I wore a mask
July 17, 2020 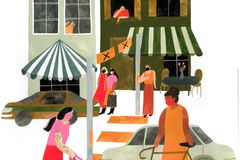 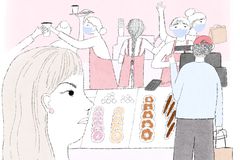 It’s unbearable to watch her struggle with dementia - and not be allowed to help
July 21, 2020 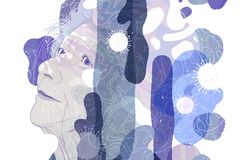