This week First Person looks at heading back to class, something that’s always challenging, even without a pandemic.

The first essay I wrote for my History of English class had been researched and polished until my fingers bled. The thesis was daring and original, the supporting evidence exhaustively researched and I’d followed MLA formatting rules with religious fervour. I expected an A, or A+ or A+++, accolades brimming with gushing adjectives, and that it would be framed and posted on the walls of the university as a lesson to future generations.

Two weeks later, I received my grade: a D-. The pages were covered in so many red scrawls I thought someone must have been shot while reading it. Certain there must have been some kind of mistake, I set up an appointment with the teacher’s assistant for the next day.

University started later for me than most. The opportunity wasn’t available when I was younger – too many siblings in our family, too little money. But I never stopped wondering what university would have been like, what went on behind the tall brick walls of those serious grey buildings. Twenty-plus years later, and I finally had the chance to find out. I was in my 40s before I sent in my application, and as a part-time student I will be in my 60s before I’m finished. That’s my goal. I’d like to graduate while I still have a few of my own teeth remaining and can remember where I put my support socks.

My first course was Global Political Economy. I walked into a half-empty classroom large enough to hold 100 students and took a seat near the back – old habits really do die hard. The professor walked in, started talking and 60 kids immediately turned their rapt attention to Facebook. Not me. Not the old guy. I sat in that three-hour lecture and tried to write down every single word the professor spoke and spent the rest of the week trying to memorize them. I was a serious student. Three months later I got my grades back: a B+. Not bad for my first class. There may have been a sympathy mark or two built in for my obvious infirmities (the neurons aren’t firing like they once did) but I had done it. Three credits down, 87 to go.

What’s it like to be the old guy in a class full of 19- and 20-year-olds? It’s weird, but a lot less weird than you’d think. They pretty much ignored me, and I ignored them. They also ignored each other. In other words, there was a lot of ignoring going on. Everyone trudged into class, listened to the prof. or stared at their computer screen, and after class they trudged out. Every now and then we’d be put in a group where we were forced to actually interact. That was weird. We’d gather together in a small circle and I’d instantly be back in high school, wondering what I was going to say and if anyone was going to talk to me and so what if no one liked me, I didn’t care because I didn’t like them either! Whatever! But that flash of anxiety didn’t last. Once we got over our initial apprehension, everyone engaged with pretty much everyone. Students today are more accepting of “others” than when I went to school. In most classes, one or two of them would make a point of talking to me, letting me know that I somehow belonged. I appreciated that more than they will ever know.

Although I was an English major, some of my favourite classes were in unrelated electives. Courses in art history and Greek and Roman history were engrossing – and made the trip my wonderful wife and I made to Italy infinitely more interesting. I could tell her the story behind a 2,000-year-old building or 600-year-old piece of art, which general won which battle and where, how the Mona Lisa was painted with a technique called sfumato or that the pillars of the Pantheon were Corinthian and the pillars of the Parthenon were mostly Doric and the arches of the Colosseum have Doric, Ionic and Corinthian pillars. I was endlessly fascinating, I thought. It wasn’t until near the end of the second week that I realized she had left me for a young gondolier named Giovanni (just kidding).

When it was time to discuss the red edit marks in my essay, I arrived 10 minutes early for my appointment with the teacher’s assistant. I was ready to make a case for the sheer brilliance of my paper: I would be polite but firm, and overwhelm her with the intelligence and deep insights of my argument. It didn’t work out quite that way. Before I had a chance to start, she told me that the essay was a rambling mess of half-considered arguments, the thesis nonsensical, support points empty hyperbole and that it had too many fragmented sentences. “But I’m a copywriter,” I said. “I work in advertising. I make my living with empty hyperbole and fragmented sentences.” I thought there might be a smile, but there wasn’t. The mark remained.

I kept studying and kept learning. I learned to love two dozen writers I had never heard of before, that I loved the Romantics and didn’t care for the Modernists, and that Chaucer is not only funny but also filthy, based on today’s relatively prudish standards of life and literature. Fifty Shades of Grey is a cozy mystery compared with The Canterbury Tales. And eventually I learned how to write an essay in proper academic prose.

I’ve got four or five years to go before I graduate, but I’m in no hurry. University is different when you’re a senior, part-time student. If you’re there to establish a career or because your parents forced you to go or because your friends are all going and you don’t want to be left behind, there are other pressures. On the other hand, if you’re like me and don’t have to worry about what anybody thinks or about paying off your student loan with whatever job your PhD in Middle English gets you, it’s just learning. Whether I’m learning remotely or in-person, it makes the world a bigger, richer place. 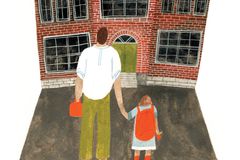 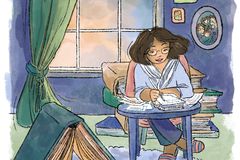