What’s it like to feel like an outsider in your own country? First Person writers tell their stories

“She will be a child of the world,” my father had said when I was born. My mother, pregnant with me, even went so far as making the Beatles hit Imagine, by John Lennon and Yoko Ono, the theme song of their wedding. They were sure that I would be special, different from the rest. They thought it would be a wonderful thing for me to be half-Japanese and half-Jewish, but to this day I’m not sure if it has ever been as beautiful as they imagined. I weighed seven pounds at birth – normal medically, but physically I was different from the other babies in the maternity ward in Japan. I was the only newborn in the hospital with light brown hair in a sea of thick, black locks; my mother told me I was easy to spot in the nursery crowd. I had a “high nose” the nurses would say, examining me with widened eyes. My Japanese grandma told my mother that the reason I would be beautiful was because I was half-Caucasian.

Being half-Japanese and half-Jewish has made my life an anomaly to strangers, to my friends and even my family. They ask questions you might think were invasive or even unkind, and if I hadn’t learned early on to accept that it was simply human curiosity to examine our differences, I would think so, too. “What type of Asian are you?” and “Why do you look like that?” are just some questions I have learned to answer without resentment.

After my parent’s separation and my mother’s return to Canada when I was still very young, she was the one to deal with these questions. When I was 3, my mother took me to a restaurant in the small Canadian town where we now live. “Where did you get her?” she was asked, as if I was bought somewhere exclusive.

Questions like this anger my mother. There have been many times when people did not see me as her daughter because of our racial differences. Scary times, too, such as driving to the United States and being stopped at the border, where she was accused of kidnapping me. Even the less stressful, misplaced curiosity of a stranger has left her dismayed and less than confident about the open-mindedness in our own country.

Growing up, I often asked my mother if I was adopted: Were the strangers right? As children do, I had crazy, far-fetched beliefs explaining my father’s absence. I imagined that my mother was so sneaky that she had hired a Japanese-accented man to call me and talk every birthday and Hanukkah. I even imagined that my mother had other real children, ones who were white, living somewhere far away that she had never told me about. As I grew older and more worldly in our little town, the prejudice that I felt so acutely in my ever sunny and oblivious youth became more and more apparent. After a while, being the only Asian person in your elementary school wears you down and makes you feel like there must be something wrong with you. I was different, and as we got older, my classmates increasingly pointed that out. If you think that as a society we have done enough to teach children about racism so that they won’t say, “Ching chang chong,” as soon as the teacher turns their back, you would be wrong. Everything I did was commented on: “Why do you bring rice to school?” was something I couldn’t answer well enough to prevent one skinny girl from following me around at recess chanting, “chicken fried rice” in a horrible mock Chinese accent. I stopped taking rice to school soon after that. Instead, I begged my mom for Lunchables.

I decided that high school was my time to fit in. No one admits it, but everyone wants to look good there. Years of romanticized high-school themed movies and TV shows had prepared me. I learned from them that, as an Asian, I was either a nerd, a tech genius or I didn’t appear in the mostly white and barely black cast. The media taught me that in order to be accepted, I had to take my whitest step forward. So, I dyed my hair blonde, I found myself looking up “eye enlarging” makeup tutorials on YouTube. I thought this would finally make me fit in.

At 16, I travelled to Japan with my mother – it was my first time there since I was born. I remember expecting to finally feel at home in this country, a place and a heritage I was so often mocked for at school. Japan was a place that I had both longed for and resented. But when I was there, I felt the same way I do here but in reverse. As we left, I told my mom I was disappointed that I didn’t look like my Japanese family either. I was too white to fit in, and I wondered if I truly belonged anywhere.

Now, at 18, I have taken that makeup off, dyed my hair back and opened my mind to accepting the two different parts of myself. I want to take what each side of my heritage can teach me and learn to love both. I’m learning to live happily in the middle of two different sets of racial expectations and cultural worlds, and slowly I’m realizing that it’s okay to be the in-between. 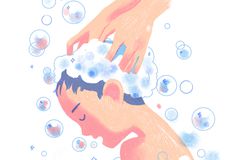 Why do people always ask me what my background is?
December 10, 2019 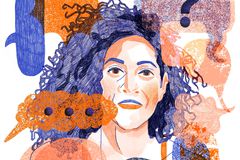 I am done ‘black-splaining’ my life to strangers
December 6, 2019 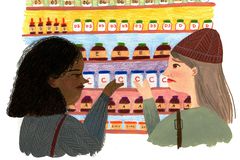