Without thinking, I tell people I ran up the CN Tower, which is how I remember the climb each time I’ve done it. The actual experience, however, is always a surprise, kind of like how I’ve heard childbirth described: as something painful you only repeat because of a faulty memory.

Every spring, to raise funds for the World Wildlife Foundation, the CN Tower opens its doors to would-be champions of the tallest metal staircase in the world. This year I was eager to sign up and try to beat my previous time.

I had every expectation of improving on my old record: I had been running, literally running, for months up the nine flights of stairs to my office at work. On the day of the climb, I went downtown early so there would be fewer competitors in my way. The April morning was unusually cold – below freezing, in fact – so I knew I’d feel better in the stairwell as colder air has more oxygen. In other years when the weather was warmer, I’d gone up feeling there wasn’t enough air to breathe.

This year I climbed with a partner from work who was half my age. After dropping off our coats, phones, backpacks and water bottles, we signed in and received identity wrist bracelets. We waited in groups of about 10 for our turn to head up the stairwell. Near the first step, our wristbands were scanned and we started up the narrow 144 flights. I let my companion go first, but soon I was ahead, calling back that he would no doubt pass me later on.

And then it was just me and the stairs. I had pictured climbing up two at a time, like I do at work. That did not happen. Instead I was dismayed to realize that almost from the beginning I’d settled into a one-step trudge. How could I be worse than at work? I wondered. I’ve only just begun! Looking up I saw that I was already on the 25th flight. I hadn’t realized I had climbed so much. There are only 12 steps to a flight, so they do go quickly. I had unconsciously raced up what would have been 16 floors in my office building and now was feeling the “ugh” of travelling beyond my initial burst of energy, beyond a distance I was used to.

More than a hundred flights stretched before me: an eternal miserable moment that promised to never end. I was in limbo where the urge to stop, the urge to rest, battled it out with my earlier ambition and future pride.

Long before the eternity on the stairs, sitting on my couch, perhaps eating bonbons, back when I first considered running up the CN Tower, I had told myself I’d push as hard as possible. Just like when one thinks, “I’ll go to that party but be really careful about how much I drink,” or, perhaps, after a breakup, “I’m going to visit my ex, but we won’t sleep together,” but then you are in the moment and reality overtakes you – past resolutions fade.

I thought of stories of mountain climbers on Everest, lying down from exhaustion, the pleasure of resting, of giving up and stopping, superseding the thought of seeing loved ones again. I could imagine how it might not seem so important. Somehow the thought that it can matter again, that it will matter again if you ever get out of this space, doesn’t make it matter in this moment.

I can’t really explain my own reluctance in the CN Tower stairwell. Nothing felt especially tired – I just felt a draining of will. I was not in pain; it wasn’t like walking on a blister, or with a cramp. I wasn’t even at the limit of my physical ability. I passed a hundred people on the way up who were content to take it slow and easy, but occasionally I passed someone going a little faster, and when I came upon those climbers, I sped up so that I would never see them again. The energy was there, but will alone couldn’t tap into it. Without someone to compete with, it was just me battling myself, through the middle of the climb, where there was no hope for an end, only more of the same.

When I did reach the end, my time was marked, and then I was directed to more stairs! The six or more flights felt like some joke from Dante’s Inferno. Finally, the eternal stairs opened up to a floor where a dozen volunteer well-wishers and a person in a panda suit stood, cheering every climber as they arrived. I walked over to the panda to give it a hug. It didn’t seem to mind.

At the top I waited for my co-worker and admired the view. It was a long wait. My co-worker wasn’t having the same CN Tower experience: Not obsessed with making good time, he was making friends on the way up. The longer I waited the more excited I got about my time, and when we returned to the ground floor, I lined up full of anticipation.

“What are you complaining about? That’s a good time!”

“I was hoping for better,” I said. This year I was a minute and a half longer than my shortest time.

“But that’s a good time,” she insisted.

As I biked home through the April sunshine I reviewed my disappointing experience, and a strange thing began to happen. The farther I got from the event, the more extraordinary it seemed.

It had been beautiful at the top, seeing the Toronto Islands, picking out the green dome of Convocation Hall, finding landmarks near my home. And I had achieved this heady bird’s-eye view under my own power. Our climb had raised hundreds of dollars from friends and colleagues for the WWF. Involuntarily, I felt elation seep into me as if coming from outside my body.

Arriving home, I took the dog out for a walk. It was cold and a chill wind blew in my face. I felt terrific. I realized I was just happy to be alive, to be in the sun, and to not be climbing an endless flight of stairs. Climbing the CN Tower makes everything feel better. 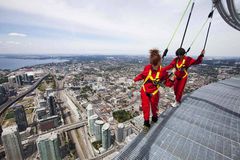