I have my reasons for not enjoying Halloween. Blame it on my childhood!

I grew up in St. John’s, the most easterly part of the East Coast of Canada, in a place known for the harshness of its climate. Winter came early and by the end of October it was cold and damp – or, more accurately, colder and damper. Often it was foggy and drizzly, if not outright raining. Sometimes there was already snow on the ground.

Even in our most inspired years, my sister and I could never display our costumes. Instead, on most Halloween nights we had to wear our outfits inside our winter jackets and snow pants. The one thing that could distinguish us from “just another kid in a snowsuit” was our faces. Sometimes we would be permitted to wear our mother’s makeup, which was a thrill – for me that was the “treat” part of trick-or-treating. More often, our mother would buy us a new mask and we would wear that out as our Halloween costume. But these plastic masks were a Halloween nightmare of their own. Aside from being hard to see out of, they were hard to breathe through. The longer we were out collecting candy, the wetter and gooier they became on the inside. And because it was cold out, the condensation would make our chins and cheeks clammy. I found it disgusting, so it was always a relief when the elastic holding on the mask broke.

I don’t recall my mother being a Halloween enthusiast in her day. She didn’t enjoy sewing and never seemed to be overly creative in her costume ideas. In fact, it seemed to me that she took her inspiration from the purchased masks. On one memorable occasion she bought a geisha mask for me. It was paired with a kimono-style dressing gown she owned. For reasons of safety, she cut the eye holes bigger, ruining the whole effect of the geisha look – but at least the kimono was large enough to wear over my snowsuit that Halloween. While I don’t think that costume would pass muster today, it was one of her more successful attempts.

Forty years later, history has repeated itself. I don’t sew and I, too, was never overly creative in the Halloween department. My children have had the advantage of growing up in the milder climate of Southern Ontario, making the whole Halloween ordeal less of an, um, ordeal. And they have been blessed with a mother who was more prone to indulge their whims and creativity than mine ever was. My mother was authoritarian, I am more consultative.

Costume-wise, my family coasted by in the early years with hand-me-down outfits from friends with older children. My preschoolers went out trick-or-treating dressed as a lion one year and a tiger the next, which entailed tying knots in the tails so they wouldn’t trip. In some of those early years we had such a surfeit of inventory on hand that the kids could have one costume for inside (at preschool) and another for outside (the actual trick-or-treating outing). The outfits were warm enough and the weather mild enough that snowsuits weren’t required.

Eventually my kids got their own ideas and I had to scramble to purchase specialty items or dash, usually last minute, to the nearest party store to buy an outfit to their specifications: I clearly recall standing in line on one eve of All Hallows Eve in order to pay for an Albert Einstein wig and matching mustache. My crowning achievement of creativity was the year my older son decided to go out as both Dr. Jekyll and Mr. Hyde. I purchased him a miniature lab coat and we accessorized with a fake bag of blood, some plastic test tubes and imitation mice from the local dollar store. Fortunately my younger son stuck more with the tried-and-true superhero/Star Wars trajectory, which made it far easier for me – I just had to go out and purchase an off-the-rack costume. We still own the plastic Thanos infinity gauntlet ordered online and it even still makes the roaring noise that he found so cool at the time.

As for the candy, perhaps I’ve forgotten, but I don’t recall being overwhelmed by its allure when I was a kid. It just never seemed worth going out into the bad weather for the sweets or (insult of Halloween insults!) well-intentioned apples. Certainly by the time I had walked down one side of our street and my plastic pumpkin was mostly full, I was ready to head home. But as an adult? The candy became hugely appealing. The desire for my kids' forbidden fruit was irresistible, so I took Oscar Wilde’s advice and simply gave in to temptation. I snuck into their rooms at night after they were asleep to steal mini chocolate bars out of their stash and then oh-so-cleverly hid the wrappers deep in the garbage so that they wouldn’t notice. I can still recall the Halloween horror of being caught red-handed one year when my younger son woke up in the middle of a covert retrieval operation.

Fortunately my boys are both teens now and I am thankful to finally be relieved of the costume responsibility and escorting them around the neighbourhood in the dark. I won’t miss negotiating the Halloween rituals amid the current pandemic restrictions, either. Perhaps when the next generation arrives, I can find my Halloween spirit with my grandkids. But, then again, I doubt it. 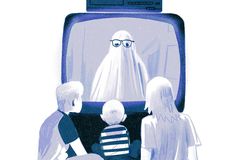 My son loves Halloween, but all the fake tombstones remind me of his sister’s death
October 30, 2019 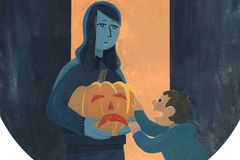