In the summer of 2017, I reconnected with a former boyfriend through Facebook. How cliché. How serendipitous.

He was someone I’d dated briefly 25 years before and had last seen 20 years ago at a mutual friend’s wedding. We decided to meet for dinner, but before the appointed date we started texting. A lot. Then we talked on the phone. For hours. It was good, really good. We were both scared that meeting in person would be a deal breaker.

Do I really want my kids to read my old diaries?

Nonetheless, we did meet for dinner. It took a little adjusting to the changes that the intervening years had wrought: the wrinkles (me), the hair loss (him) and the weight gain (both). But it also quickly became apparent that our physical metamorphoses were more than matched by the emotional maturity that children (me), reconciliation with a parent (him) and failed marriages (both) had forced on us. He was no longer an angry and sarcastic young man, and, for my part, I was less judgmental and snooty. Life had brought us both greater insight, empathy and, yes, acceptance of the other’s shortcomings and appreciation of our good points. The spark was there – the same, but different. Better.

We agreed to explore the potential of this reconnection, but we had to be stealthy because of my kids. I couldn’t risk introducing them to someone who wouldn’t be there long-term, but he and I also needed time to talk and be together, to see if the relationship was sustainable. I felt like a teenager again, except this time I was hiding from my kids instead of my parents.

I knew that sooner or later I would be busted, likely before I was ready. I was right, it happened weeks before I wanted to disclose. Did I mention that son No. 2 has an uncannily high emotional intelligence for a tween?

“Mommy, are you seeing someone?”

“Because you are acting different.”

“How?” I asked, choosing to ignore the error in his grammar.

“You’re texting more. And you took a call on your cellphone and walked away from me. You never do that.”

At this point, I might still have salvaged the situation with evasiveness that fell just short of outright lying, but then my other son chimed in.

“If Mom had something to tell us, she would have told us." Did I mention that my firstborn has a deep sense of trust and honour?

With his statement, I was undone. A bug about to hit the windshield of life. I did the only thing I could do – I spilled my guts immediately. The boys took it with good grace and some curiosity. Whew.

At least I didn’t have to hide the new man in my life anymore, but it was far too soon to introduce everyone. Everything I read said the relationship should be at least six-months old to ensure it was reasonably stable. In the meantime, my boyfriend and I talked, texted and met at my place when the kids were at school or at his place on weekends (which necessitated dropping the boys off at my mother’s). Did I mention they don’t like staying with my mother?

But now I had new challenges to navigate. To make him a little bit more real, I started to occasionally slip into conversation things that my boyfriend had said (a joke so bad it was funny) or done (replacing light bulbs or hanging a picture). Then I watched as son No. 2 began to fall in love with this stranger. I had figured the two would get on, but my boyfriend was rapidly becoming too perfect in my son’s mind. I worried about a fall. Two steps forward, one step back.

When I voiced my concern, it was pointed out to me that the six-month rule existed for situations where the kids didn’t know about the new paramour. Waiting six months to introduce him in this situation was too long and would likely lead to disappointment at meeting the new idol in the flesh. Plans were rapidly made to introduce everyone in “neutral” territory. We chose a coffee shop in a shopping mall. The meeting went well and we spent some extra time wandering the mall, ending up in a bookstore.

Since that initial meeting, there have been joint outings, movies out and at home, “family” weekends (including overnight stays), trips to his family cottage and travel to foreign locales.

But integration remains a work in progress. Along the way, there have been funny and sometimes awkward moments. Like early in our relationship, when son No. 2 heard my boyfriend and I were going away together for the weekend and told me that we needed to get separate beds in our room. Or when he was relieved to hear we weren’t going to Niagara Falls because that meant there would be no marriage proposal! Certainly the “sharing a bed” thing has been a bit ticklish, but we eventually moved the boyfriend off the sofa bed in my office and into my bedroom. Son No. 1 seems to be accepting all of this with the blasé bravura of the teenager he is, while son No. 2 is torn between curiosity and biting off more than he can chew from the tree of knowledge.

In the meantime, we are planning a “family vacation” to Western Canada this summer, including 10 long intensive days together sharing a rented car and one hotel room that sleeps four each night. Yes, there will be separate beds, but the actual sleeping arrangements have yet to be determined.

Did I mention we are all hopeful?

Dad was a master of all leftovers – for breakfast
February 26, 2020 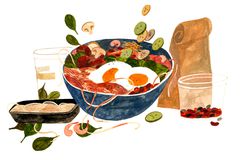 The thrill of Giggle Hill (every country road has one)
February 25, 2020 Should I feel guilty for having a child in this climate crisis?
February 24, 2020 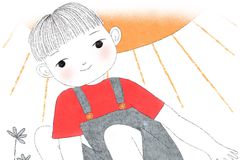