I was a conscientious 25-year-old who generally tried to minimize her sugar intake, but the 1 p.m. start time would give me the opportunity to spend the rest of the day working off the sugar rush.

Mostly, I wanted to see what kinds of desserts would be at a Newfoundland dessert party. Though I grew up in the province, neither of my parents did, which means I knew little about the province’s best-loved desserts. To enhance my cultural education, I decided to run to the first dessert party then walk to the other two. This was, after all, going to be a lot of cake.

Pass the shui jiao: I’ve found my identity through food

The next day, I set off at a jog. Upon entering the first church basement, I found myself looking onto a group of older ladies moving between the self-serve buffet and circular tables with large plates of puddings, squares and custards. Some were serving tea – presumably orange pekoe, the Newfoundland tea of choice – but most were chatting as they filled their plates. I was the youngest person there by a good 30 years. But no matter, I was there for the food. And there’s no harm in a bit of polite conversation for the sake of cake.

I’d never seen so much trifle and custard in my life. There were heaps of sweets including pecan pie, partridgeberry pie, blueberry buckle, banana cake with butter cream frosting, an Oreo roll cake, cheesecakes, rum pound cakes and cough syrupy-date squares – old-fashioned desserts that only someone's grandmother seems to make these days.

I was captivated by the whipped cream Jell-O pudding cakes – green ones, pink ones, orange ones, yellow ones. These do happen to be part of my heritage, as their popularity and variations stretch across Canada. My dad made a pineapple-lime one every year for Christmas until the rest of the family finally told him to stop. At least half of our household had never eaten it anyway and another quarter had never exactly raved about it. Its annual making was exceptionally the only time Dream Whip mix was used in our house, and for that reason, packages of the stuff sat – and probably still sit – at the back of the cupboard until the next Christmas when my dad forgot it was there and went and bought more. It was tradition, though (both the overbuying and the making).

On my mother’s Saskatchewan side, Jell-O pudding desserts were not cream-based. Her mother mixed strawberry, cherry or raspberry packages of the stuff with a can of fruit in juice or syrup. She made a rainbow concoction for special occasions and barbecues.

My mother – part of the revolutionary next generation – had the thought to add fresh sliced banana. Or maybe that was her mother’s idea, once bananas became available. It was the Depression, after all.

I sat down not far from the two, long, all-you-can-eat buffet tables full of desserts lining the walls of the church basement, right next to a woman with a plate piled with pillows of whipped-cream confections. “We must look like pigs!” she said. With a sheepish smile, I agreed we both did.

I’d planned to come, eat fairly anonymously and move on to the next party, but it turns out that Newfoundland tea and dessert buffets are just a premise for playing bridge. When the friendly lady next to me asked if I was staying for bridge, I declined, stating that my dad plays well but it didn’t run in the family. With the abundance of capable bridge ladies in the room, they surely didn’t need me.

And what if they asked if I was married or had children? Telling a roomful of likely grandmothers that you don’t particularly like or want children seemed wrong – “a sin,” as we Newfoundlanders say.

Feeling a bit ill after the inevitable overindulgence, I decided to forgo the other dessert buffets that day. Yet after just my single tea party, I’ve become even more fascinated by these events.

While most of the recipes from my grandmother’s rural Ontario church cookbook (full of canned fruit, fake cream and evaporated milk powder) were represented at my Newfoundland church-basement tea party, where most of the desserts had names ending with “Surprise,” what was missing was more interesting. No one seemed to miss the pastries, tiramisu, pavlova, salted caramel cupcakes, baklava, gulab jamun, stollen or maple syrup pie that I’d hoped might be there (there’s an excellent French bakery and a long-standing Indian restaurant in St. John’s).

I was also surprised that there was no carrot cake, cookies or pineapple upside down cake (an opportunity missed for all that canned pineapple, I felt). I’d hoped to find something like my mom’s warm chocolate pudding cake – an inherited celebratory Prairie staple.

There was a time when custard powder was as groundbreaking as a Momofuku Compost Cookie but after crashing my first Newfoundland dessert party, I learned that tastes change, often based on circumstances and geography. I also learned that I’ll never be a bridge-playing, whipped cream and Jell-O pudding cake-making lady living in St. John’s, in rural Ontario or Saskatchewan.

Maybe if I’d been born 50 years earlier, I would have had a taste for it. 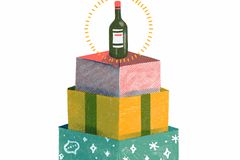 I’m retired and miss my co-workers, so how do I replace that fellowship?
December 15, 2019 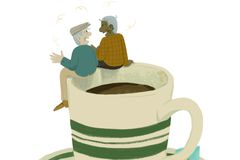 I thought I knew how to speak English. Then I moved to Canada
December 13, 2019