“Up, up, up!” she chants, followed by, “Down, down, down!” 40 times in a row, as my granddaughter entertains herself on the accessibility ramp outside a shuttered shop. We have nowhere to be. I have no idea what day it is. I have not known what day it is for a full 10 months.

I have moved to a different city to provide child care so my daughter and her partner can work for the duration of the pandemic. But I could be anywhere. I inhabit a six-block radius and have explored only playgrounds, construction sites and the path along the river. I have visited nothing that would identify where I am.

Everything that I observe these days is from a toddler’s eye view. I must be experiencing time and place in a way I haven’t done since before I had memories. It’s pretty trippy, when I think about it, which I have ample time to do. I have let go of my initial preoccupation with all the experiences we’re missing because I am so enraptured by what matters to this child at any given moment. Puddles, obviously. Bulldozers and dump trucks. Rocks, held lovingly in her small fist the whole way home, or stowed carefully in the cupholder of her wagon, to be admired and sorted later according to criteria that are obvious, but only to her. Picking frostbitten green cherry tomatoes and tossing them fervently into an empty plant pot. Dancing with stop signs. Burying balls that have sailed over the tennis court fence and landed in the sand box, her face lighting up when they are unearthed. Every single time.

My job is to wait. And watch. Let her try things, soothe her when she tumbles, keep her safe. Bring the snacks, occasionally push her on a swing, but mostly let her be. Tell her the names of all the things she points to (which is all the things). Take her hand when she offers it because she is in slightly unfamiliar territory, or wants to practise the balance beam on parking curbs.

The two of us never have to hurry. We never hurry. The magnitude of this lifestyle change astonishes me every single day. We are unhurried and unharried. I don’t think I have ever heard myself utter the words, “C’mon, get a move on,” normally directed dozens of times daily toward infuriatingly spacey, sluggish children. There are no drop-in play groups, no library story times, no guppy swimming classes. No other children at all, except to admire from a distance at the playground (forever using distraction to get my small charge to back away a little). And sometimes on the computer. She wants to show off how she can stand on one leg, tries to hand the other boxed baby a Lego block or a raisin through the screen. Until some lightning-fast little hand hits the off button.

Who knows how her sparkling new brain processes all this? I survived on video chats when we were thousands of miles apart, and it was as if she knew me whenever I appeared in the flesh. My daughter’s family and I convened in the same city in the fall of 2020. We rented a house together, which is not something we would ever have anticipated doing, at least not until I’m in my dotage. As it is, I am less than a decade into the crone third of my life, and fond of my solitude. We will all regain our independence when this is over, and I will be glad to be mistress of my domain once again. But the truth is, I have not been pried away from my fiercely self-reliant lifestyle; I have been propelled by circumstance into the arms of the people I need to take care of me. Taking care of my granddaughter is a front.

In March, 2020, just days before the world shut down, we lost my younger daughter to fentanyl poisoning. I can’t say it was entirely unexpected, but that detail did nothing to lessen the pain. It has always irritated me when people say that someone died “after a long battle with (name of disease),” as if they could have won if only they’d tried harder. But in my daughter’s case, “battle” is the right verb to describe her relationship with mental illness. Her suffering had been intense for close to a decade, though she was only 27 years old. There was nothing she didn’t undertake to alleviate it. She put enormous, exhausting effort into staying alive. She put herself through long residential treatment programs, aggressive electroconvulsive therapy, multiple medication adjustments, hours of therapy and endless research in her pursuit of pain relief. One night, she tried the wrong thing. For this, no one can blame her. We can only miss her, terribly.

In March, it was as if the whole world went on bereavement leave with me. I had company for a few brief days after my daughter’s death, and then I was alone, everything eerily quiet inside my apartment, in the halls of my high-rise building, on my street, throughout my neighbourhood. I had long phone conversations with my firstborn, four provinces away, and watched my granddaughter play for as long as possible every day, peering at her through a tablet perched on a shelf. I didn’t let many weeks go by without reaching out to friends. I signed up for the various things that might alleviate my suffering: online counselling, a grief support group via Zoom, an advocacy group of mothers who have lost children to overdose.

It was the physical isolation that was unbearable. I went 15 weeks without touching another person. Now a very small girl waits for me, watches me, soothes me, keeps me safe, takes my hand. 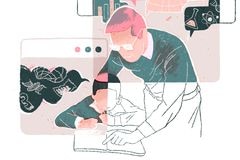 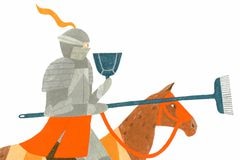 Just like a plastic bag, I twisted in the wind of these weird times
February 11, 2021 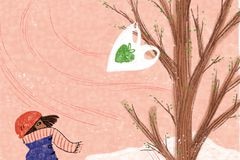