The all-staff meeting began with an icebreaker, in which Corrine from communications read out secret talents and we guessed which colleagues possessed them.

“This person has a black belt in karate,” she said and the room hummed in anticipation. Corrine revealed, after a few wrong guesses, that it was Clara, a sweet, slight department manager. Clara took the attention graciously.

I shifted in my chair. I had thought we would hear a thorough list of hidden accomplishments. Some would be genuine, some ironic, but everyone would be counted. But there were only five. The vast majority of the staff, it seemed, had said, “Oh, not me,” when Corrine had circulated among our cubicles to make inquiries. And I could have likewise cried talent poor.

I cringed inside when I heard the line, “This person is a singer-songwriter.”

I should not have taken it with such unease, but I dreaded the brief celebration – looks that say, “Wow, we didn’t know you were that.”

There is no sequence of coloured belts in songwriting, no proper measure of one’s mastery of the craft. I wished in that moment my talent could have been better qualified with something like, “This person wrote a song that appeared on Feist’s new album.”

I began writing songs when I was a teenager in the late 1990s. During my high-school years, MuchMusic videos were all from Aqua and Prozzak set against Staind and the Goo Goo Dolls – it was maudlin music counterbalancing blatantly insincere music.

To paraphrase C.S. Lewis, people weren’t writing the kinds of songs I wanted to hear and so I had to write them myself.

Borrowing from my classical piano and voice training, I wrote what I thought at the time would be seminal works. They were in fact nice, simple torch songs, with throwaway lyrics and chunky piano accompaniments in the style of Elton John. I needed a song with a hook that I could use to wedge my way in to the radio playlist. So I could help. I thought of myself as an emissary to music in its crisis.

By my early 20s, I was working on an arts degree while my songwriting talent grew and my intentions for it matured. My parents’ basement was my workshop. Ideas fell out of me and onto the tracks of my dad’s digital recorder. The songs were indirect reflections of my life: They bore the strain I felt being in my hometown and very alone; they bore the desire to be loved but were never love songs.

While at university I became involved in campus radio, a well-curated trove of independent music from every style. Mitz, the catalogue director, was revered for his breadth of knowledge. Everything – from metal to spoken word to Japanese noise pop – was earnestly reviewed at our station. Each Monday, Mitz stacked the dozens of CDs that would be added to the playlist at the front of the library, each labelled with a brief description of genre and sound. On the better ones, he wrote “Play” at the bottom of the sticker. On the best ones, he wrote, “PLAY!!!”

The year I graduated, I brought in an EP I had produced. It was shrink-wrapped and Mitz was impressed by the professional veneer. He asked me if it was mastered. I said not exactly. He generously rated it “Play,” and the disc peaked at 21 on our charts before drifting into oblivion.

That staff-meeting icebreaker happened a few years later. Songwriting was still my secret talent, but all the songs I’d written to the point seemed like clutter to be junked. I had a body of work stockpiled in self-produced demos. I had accrued some performance experience – open stages as well as songwriters’ competitions, I’d performed as an opening act for a couple established bands, and even taken part in several collaborative gigs recorded for broadcast on public radio. But I no longer found myself waking up excited to listen to the song I had recorded the previous day. I didn’t find the pitch on my vocals to be as sure as it had once been. The thought of playing another open stage with the amateurs only dampened my ambition, partly because I was one of them. I was better. But not by as much as I had once thought.

The prospect of precocious achievement had long passed me by. There is still the latecomer trope: Man plodding along in unsuccessful life gets lucky break. But the pursuit of music can take other directions.

My mother prized music appreciation ahead of accomplishment. A music teacher and pianist, she did not love all music. She valued discernment.

In my early childhood, listening to her mix-tapes was a bedtime ritual. My siblings and I lay awake with the lights out as Danse Macabre came on; the violin lead sounded sad and sickly, but also beautiful. My sister cheered the opening of Debussy’s rousing Ballet, startling my brother and me awake. And The Emperor Concerto dripped with such sweet sadness, I couldn’t believe anything could be so wonderful, but not in a fun way.

On occasion, I still hear a piece of music and feel moved by the way it so perfectly connects me. To the composer? To the heart of human pain, longing and release? Or to a freshness that is hard to find when you have trodden the music landscape for so long.

Sometimes even my own songwriting takes a slight turn and feels fresh again and I realize that my discovery of music – what I can find in it and what I can do with it – is still in its infancy. Occasionally, though I am extremely embarrassed to report this, I feel goosebumps when I revisit one of my own recordings and feel the connection to what I tried, with some success, to express.

There’s something about a full tank of gas that makes me put pedal to the metal
April 10, 2018 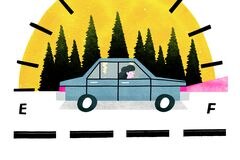 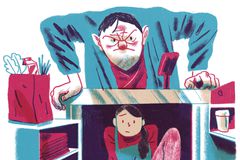