It wasn’t the way I pictured our relationship ending. An uncomfortable, chance encounter in a Winners department store, of all places. Me, deeply regretting my decision to turn right into the cosmetic aisle and not left toward the check out and she, probably regretting she hadn’t used a sharper instrument the last time she was close to my skull. With my tuque unfortunately clenched in my hand and not on my head, I forced a smile as myriad fight or flight options raced through my mind.

Time froze as snow thawed from my boots and pooled about my feet. Her eyes did not immediately meet mine but instead absorbed all the incriminating evidence she needed to explain my sudden absence from her life. She tracked a distinct path from my left ear, up to my forehead, down to my right ear and back again. Her expression, in earlier times warm and animated, now wavered somewhere between confusion and expectancy.

Whether between countries or individuals, words spoken or actions taken with a moment’s notice can set a relationship on an irrevocable course toward doom or reconciliation. I have discovered, too little too late, that I am no James Bond. As my mind recalibrated to its default program of “really dumb things to say to break an awkward silence” and came up empty, I reverted unconsciously to my age old, telltale gesture of guilt. This is an action that in the past told my mom it was me who ate the brownies put aside for the company. It was the flag that signalled I, not my sister, let in the stray cat and the beacon that flashed no, those weren’t actually curling iron burns on my neck.

In that moment of panic, I did the unthinkable. I ran my fingers through my freshly cropped hair. At once, I regretted the move. My hairdresser of many years, Josie, stepped back and folded her arms. She had done the math. It had been eight weeks since we had been together. The creation on my head could not possibly have been hers. I had shown up at the proverbial gunfight without so much as a pair of thinning shears.

My lips, at this point, although sandpaper dry, were starting to loosen. This, for me, on any given day, can be a blessing or a curse. Today they would further expedite things the way of the Titanic.

“It was just once,” I blurted. “And it was only a quick trim.” She tilted her head to one side, bemusement taking root. “You were so busy and I really needed someone. I kept calling and only got voicemail.” My hand was creeping toward my shortened tresses again. I wiped my nose with it instead. Several times. In rapid succession. “Someone at work mentioned her name and I just thought, ‘well, I’ll see what she’s like.’”

A young mother, perusing body lotions, took her toddler by the hand and scurried away without looking up. Josie didn’t seem to notice. The look on her face said she could easily pull up a chair and order popcorn. There is nothing so satisfying, I’m told, as having the upper hand, and Josie certainly had it.

“Won’t give into that whim again. It sure made me appreciate the things you do,” I said, feeling my brain may be throwing me a life preserver. I may be able to salvage things here after all, I thought. “I mean, look.” I lifted up some strands of hair, hoping beyond hope my latest stylist had left some split ends.

Josie, to her credit, remained silent but raised her eyebrows as she inspected the proffered lock. Her eyes narrowed. I followed her gaze sideways and experienced what I can only describe as the feeling I knew as a kid when I awoke from a nightmare of being at school in my pyjamas. I was exposed in my entirety. The piece of hair I had chosen to win back Josie’s affections was one of the few strands that had been freshly highlighted, part of the “six foils and a cut for $59.99!” deal that had led me to stray in the first place.

Upon reflection, had Josie reacted with reproach or insolence I might have felt better. I could have justified my infidelity if she would have been just a bit nasty. Instead, she remained poised and professional. She had moved on. Wishing me a good day, she suddenly seemed to need something on the other side of the store. I stammered out that we’d talk soon, which I’m sure she’d heard before. She knew the drill. This was definitely a case of it was me, not her.

Humbled, I stood rooted to the spot. Although logic dictated our meeting was nothing more than an embarrassing moment in time and all would be forgotten, I was mortified. Should I have been? Josie wasn’t someone I considered a friend but she did know more about me than most of my family members. In the hour I spent with her every two months or so, I shared more than I did with my co-workers whom I saw every day. She knew if my kids were coming home for the holidays and what they were taking in school. She knew the state of my mother’s health, how I missed my hometown and my favourite just about anything. She knew I’d pick beer over wine and Angelina over Jennifer.

There would be others, I reasoned, but somehow a line had been crossed. Perhaps a quick, pre-emptive call on my part saying given how busy she was, I would be seeing someone else for a bit might have made the last five minutes a little less messy.

Finally, I got up the gumption to leave, but not before something on a nearby rack caught my eye. Hair elastics and bobby pins. I picked them up and put them in my basket. In the coming months, I suspected I’d need them.

Facts & Arguments
When I ditched the dye to let loose my inner silver fox, I inspired others to do the same
May 29, 2017 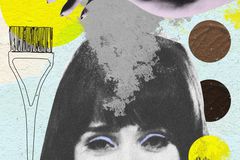