Allison Gacad
Contributed to The Globe and Mail
Published May 26, 2020 Updated May 26, 2020
Comments
Please log in to listen to this story. Also available in French and Mandarin. Log In Create Free Account

When I left the suburbs of Scarborough, Ont., for the mountains and ocean that surrounded the University of British Columbia, my parents were often worried about me. I was excited with my newfound accessibility to hike up mountains, ski down slopes and climb through old growth forests just minutes away from my new home.

“Don’t go by yourself, don’t injure yourself, be careful!” my father said. “Makikiraan po,” ask for permission from your surroundings when you travel, my mother reminded me.

They couldn’t relate. They were born and raised in the Philippines, and while they did run barefoot through rice paddies and climb coconut trees, elders in their family always deterred them from pursuing too much adventure in the outdoors: aside from the risk of injury, too many antics trampling through the fields could ruin their harvests for the year.

Inevitably, my parents transferred this sense of caution onto my new situation. They didn’t have trampled fields to worry about, but seeing their youngest daughter enter the outdoors, navigating unfamiliar trails and mountains for the first time, left them unsettled.

My parents had joints they needed to be kind to, and preferred low-impact activities: tending to a front lawn of perennials and backyard plots of tomatoes, cucumbers and spring onions. During the winter, they would do laps around an indoor walking track and when my sister had a baby, they became baby-sitter-indoor-sprinters, too, chasing after their granddaughter in their home a few days a week.

Then COVID-19 swept all of us off our feet, unexpectedly bringing me back home to live with my parents. Since I’d left, I hadn’t spent more than two weeks with my family.

Early in the pandemic, we were all restless from staying indoors, afraid to go outside more than necessary. My parents complained of aching muscles – my dad from a lack of exercise (including babysitting) but my mother, a nurse, also strained herself working more shifts than normal at her long-term care home.

Stuck inside, I scrolled through my friends’ Instagram feeds, wishing that I could release some endorphins running along the beach in Vancouver too, instead of grey cul-de-sacs of Scarborough. I kept getting targeted advertisements for at-home fitness videos, and eventually signed up for a 15-day trial of low-impact barre exercises. Then I convinced my parents to join me.

“It’s easy on the joints; it’ll slowly strengthen your muscles,” I told them, and to my surprise, they agreed to try it out for at least a few days. Our basement became a makeshift studio. I set up my laptop on the bar countertop, pressed play, “Three, two, one, inhale…” and suddenly my parents were in primary posture, attempting sumo squats and pliés, modelled after the instructors on the screen. As the class went on, my mother’s arms flailed, my father often lost balance and I scrambled with soup cans as weights. But we were sweating, endorphins were flowing and a sense of accomplishment permeated through us. Despite the small space, the movement of our bodies made us feel good in the uncertain times.

As physical distancing and isolation continued we found a sense of routine and normalcy by staying active. Instead of being glued to the incessant news feeds of COVID-19, after lunch we would retreat to our basement and lunge to the encouraging sound of a fitness instructor’s voice coming through my laptop screen. Some days, it was a dance class, other days, yoga. My father even rebooted our aging Nintendo Wii console and got moving to the Just Dance video game. While I filmed my parents dancing to One Direction, I video-called my sister, who filmed her daughter doing yoga for kids. Finally, it felt like we had permission to enjoy each other’s company – albeit virtually. We had so much fun that it became part of our daily routine, our family group chat became filled with photos of new exercises and dances we had tried.

Eventually I hope to return to Vancouver, but I feel uneasy about leaving my elderly parents behind. I want to leave them something to keep them busy and active, so I started growing seeds indoors – tomatoes, bell peppers, cucumbers, zucchini and even native flowers such as milkweed and wild rose. Admittedly, these are more crops than what my parents are used to growing – will there be enough room for all of this in our backyard? The answer is no, but making room will keep my parents active and busy. And if prices for fruits and vegetables go up, they could at least be somewhat self-sufficient with their harvest.

My dad, in particular, took to the project and spent several good weather days outside landscape designing. Both of my parents have ditched my new personal-training workouts in the basement in favour of digging up the grass and turning over the soil in the backyard.

Recently, I brought up the idea of returning to Vancouver. My parents looked at me, unsure how to react, and asked if I could at least stay until the end of May: they needed my labour in the new backyard farm.

I laughed and agreed, I want to make sure my parents will have a harvest this summer. But the seeds are taking longer to sprout than I had expected. Maybe it’s a sign that it’s still too early for me to think about leaving. 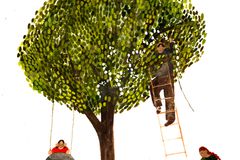 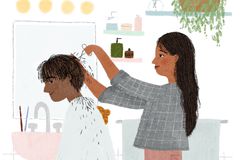 Solving the puzzle of the jigsaw that consumed me
May 20, 2020 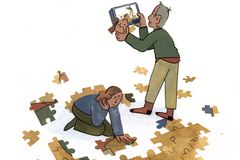