I’m afraid of my hairdresser. My hairdresser is a middle-aged man who works at a franchise called First Choice. The name is misleading. It’s likely not your first choice but your cheapest choice.

My hairdresser is the only man in this particular location in the east end of Toronto. That sets him apart immediately. From the moment I saw him, I sensed an air of superiority, an upward tilt of the head, a weary, barely concealed loathing. You could sense he felt this was a step down in his career. I avoided him like the plague but the oxymoron of First Choice is that you aren’t actually allowed to choose your hairdresser. Their “drop-in” business model means when you arrive, your name is put on a list and you are called when a chair becomes available. It’s a roll of the dice which stylist you get. And let me tell you, I have come out on the bad side of that dice many times in my quest for a cheap haircut. The lopsided bob, the flagrant overuse of a razor, the “just want a trim” and end up with a Pat Benatar circa 1980. I’ve been there.

One day, my number was up with Adam.

Just because I’m a priest, does that mean I shouldn’t swear?

I sat in his chair and started blabbering about wanting a quick tidy up, not too short, don’t go crazy, please. And all the while he was picking up sections of my hair and letting them drop. His expression said, “How am I expected to work miracles with this tangled mass of sludge?” He shrugged and told me it would be best if I added a wash and deep conditioning to my $18 haircut. That would add an extra $20 to my bill. There was no wiggle room on this, so I met him halfway with the wash. When I settled back in his chair, Adam was clearly not happy. He told Vera, the stylist working beside him, that he needed a coffee. She dropped her scissors and jumped to get him one. Wow, I thought. Everyone in this room is bending over backward to please Adam. He passed her $10 and told her to get one for herself before he turned his attention back to my head.

“Look, I can give you a good haircut if you let me” he half pleaded.

Just like that, I surrendered all power to the man holding the scissors. I didn’t know if he was any good, I didn’t know what his intentions were or what his idea of a good haircut even was. There was something in his assurance that made me think he knew something I didn’t and I would be wise to turn it over to him. And that’s when he reached for the small plastic soccer ball.

The ball was an invention of Adam’s. It held a trimming device not unlike a razor but not exactly a razor. He had cut a hole at the top to insert the blade inside and secured the blade with duct tape.

He set to my hair, picking up sections and waving the soccer ball around so quickly that for a moment I didn’t even think it was making contact with my head. He told me that he was saving money to create a prototype of his invention which he hoped to sell to hairdressers around the world. He moved with the speed of Edward Scissorhands, only pausing to look me in the eye and say, “Don’t ever let anyone cut your hair with a razor, ever!” I told him (sotto voce) that very procedure had happened right at this location with another stylist. “Who?” he demanded. I shifted my eyes to the right and gave a slight nod at Vera. Adam rolled his eyes knowingly. Although I felt a tinge of guilt at selling Vera down the river, it was worth it. Adam and I were now co-conspirators.

A short time later, after a spray down with a product designed to make my hair look like I just got out of bed and hadn’t washed it in two weeks, he was done. He held the mirror so I could see the back, sides and front. It was a great cut. A really great cut. For weeks after, friends who had always avoided mentioning my hair, were telling me it was a great cut. That little minx and his soccer ball had done it!

After upselling me three hair products I will never use, I left First Choice somewhat stunned. When it was time for a trim, I called ahead to make sure Adam was working. I let three clients go ahead of me so I could be the one to sit in his chair. I was no longer afraid of my hairdresser but I was terrified that his game-changing soccer ball thing would hit it big and Adam would no longer have to grind it out at First Choice.

On my last visit, I asked for Adam and the receptionist nodded as though I was the 80th person that day to do so. He had become the “must have” hairstylist and it was wearing thin with his co-workers. I watched him work his magic on a woman who told him she wanted her haircut to look as though she had it done three-weeks ago. After a flurry of activity and what seemed like three minutes, he was done. If I hadn’t seen her in the chair, I wouldn’t even know she had a haircut. There was no before and after.

I sat in his chair and he greeted me somewhat warmly. He told Vera he was exhausted and needed something to eat or a coffee. This time she didn’t jump. As Adam flopped my hair around, I said, “Not too short, okay Adam?” He gave me a withering look and reached for the soccer ball. Somewhere mid cut, he casually announced that he was leaving. The blood rushed from my face. No, this can’t be happening. “Are you moving to a new location?” I asked hopefully. I mean, I would drive across town if needed.

“No, it’s a very high-end salon in Forest Hill Village” he responded. “They charge $150 a cut,” he added casually. He knew it would be our last cut and mentioned he wouldn’t share the soccer ball with his new salon until he had the copyright solidified. Adam assured me that the other hairdressers would take good care of me. But would they really? As he whisked away at my locks, I asked him to take a bit extra off with the magic ball. I was going to have to make it last a long time. 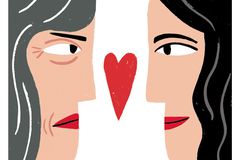 Why don’t we celebrate Mother-Daughter Day instead?
May 9, 2019 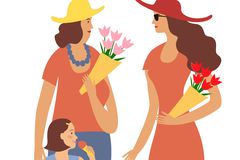 Mom’s Featherweight was loaded with memories that I couldn’t leave behind
May 8, 2019 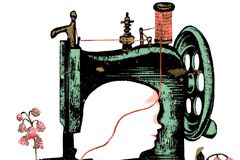