As a child, I had a baby elephant. A stuffed toy that I carried around everywhere. It was a gift when I was born but I would tell people that “this elephant is my baby.” The adults always laughed, riotously and with their mouths wide open showing all their teeth. The things children say, aren’t they hilarious, aren’t they wild?

I still have that stuffed elephant. It’s sitting in my spare bedroom, waiting. I had always planned to give it to my own baby, my real baby. The baby I had planned to have once I got married and we started trying. That elephant is still waiting with the same sweet smile on its face, and the real baby is still a phantom, fluttering inside my imagination like a trapped bird.

When we were ready, I stopped taking the birth control pill, and turned toward this fresh task in my life that felt like a clean new page in a book, that I was going to fill with my own joy, my own memories, my own struggles, but also, with my own child. I took prenatal vitamins every day, even though they gave me horrible acid reflux. Months went by, and my period did not come. I took a pregnancy test. I took several. They were all negative. But I figured as much: it can take a long time for the body to regulate itself once you stop oral contraceptives. I knew this, and was prepared. I was not prepared for how disjointing it would feel for my body to be at war with itself. I experienced mood swings, fatigue and exhaustion, and for one horrible weekend, the most radiating and terrifying jaw pain that I have ever had in my life; all “normal” and potential side effects of stopping birth control, and I had been on it for close to 15 years. For the first time in my life, that longing for a baby started to feel unreal to me. Like a page in a book that had been torn out before I could read it.

Six months in: little had changed. After blood tests and a pelvic ultrasound, I was told by my doctor that I have what is called polycystic ovarian syndrome. Instead of preparing for ovulation every 21 days or so, the follicles my ovaries created never seemed to fill, not with a mature egg. In the final ultrasound, my ovaries looked like small lockets clustered with lumpy seed pearls; covered in empty follicles, empty shells that would never be filled with anything apart from random hope. I also have hypothyroidism, which was the source of my constant fatigue, but also severely inhibits natural ovulation. It was explained to me, gently, that these conditions don’t normally go together. I had been lucky in the worst, most backhanded way. This explained, then, why I hadn’t had a period in so long. My ovulation was so random, so unpredictable, that having a baby naturally would be a figment of chance. Like trying to catch a bird midflight with your bare hands or standing in the rain without getting wet. For the first time in my life, I put the baby elephant in a closet and shut the door.

What followed were appointments at the fertility doctor, and “cycle monitoring.” Turns out, my follicle grew, and slowed, and then stopped. Then it made a cyst instead of housing an egg. And then it burst – the pain, which you have to endure since it’s not large enough to surgically remove, feels like someone stabbing you over and over, but with less force each time, like they are slowly getting more and more tired. This betrayal – of my own body – cut me deeply. As I continued to try to open my body and make it fruitful, the wound grew wider.

I am a woman who has always wanted children. Until I realized suddenly, almost seven months to the day that we had started trying, that the longing had left my body, and silently, like a ghostly shadow.

Upon realizing this, the first thing I felt was shame.

I was just so tired: of the treatments, of the monitoring, of the probing and poking, of all the ultrasounds, all the bloodwork and all the people asking me when I was going to have a baby. The shame was born of that tiredness – its unnatural child – because I knew that there were so many other women who had been trying to get pregnant for so much longer than I had, and they are still looking forward. They are still bearing up and smiling and going about all the different fertility treatments like it’s the most normal thing in the world; and I have to drag myself, mentally and physically, and remind myself that I do want this.

But suddenly, I didn’t anymore. It was the trying that took it out of me. How much longer will I have to do this? Am I hoping for nothing? Is there any point in hope at all?

Through all of this, my husband Tom has been the pillar of hope that I never knew that I needed. When things were at their darkest, he took matters into his own hands.

It was on Valentine’s day, which, in my tearful stupor, I had forgotten.

He came home from work, sat me down on the couch and made me open a plain cardboard box. Inside was a velvety soft stuffed rabbit – an animal that he knows I love. Its fur was creamy white, flecked with brown; it had long, soft ears that I like to wrap around my index finger, and comically large feet with beautifully stitched and detailed pads. It was such a small, simple thing. It was a gift to give me comfort and to indulge my childish love of stuffed animals, but that rabbit – whom I christened George – is my talisman now. It’s not a symbol of hope. I still have that, even though it’s hard for me to access. My hope is just one bedroom away, with the baby elephant.

The rabbit sits on my bedside table, where I can easily reach over and rub his foot, or wrap his ear around my finger, before I turn back over in bed and let Tom hold me till I fall asleep.

I got creative with my pain and launched an infertility podcast
May 5, 2019 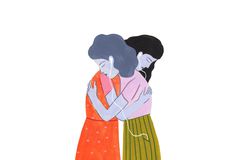 If a whale can hold its dead calf for days, why can’t human parents do the same?
November 12, 2018 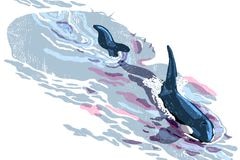 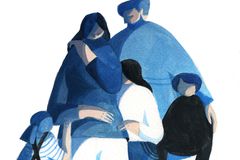