I love February! The snow, the cold, the slush, the ice, the short days. I love this twilight month – after the festive spikes of Christmas and New Years but still far from Easter awakenings. February blahs are an alien concept to me. After half a lifetime of Februarys I am still a little surprised when people malign this enchanting midwinter month.

Somehow, we have been taught we are supposed to endure February, to close our eyes and brace for it, wishing it away. We complain, we create holidays like Valentine’s Day, Family Day, even line up for Roll up the Rim to Win contests to help us forget this neat, even month of just 28 days. And what other month gets a bonus day every four years? Instead of regarding it as a race to the other side, there are benefits to cozying up to February, an opportunity to indulge in a little introspection, permission to shelter and actively wait, to contemplate – good and bad – whatever the world drops at your frozen doorstep.

Similar to a long postponed walk in the woods, February-bathing can be an opportunity to shed distraction and absorb insights. If we choose, it gives us permission to pause, travel inward and connect with what is natural, still and unaffected. Considered thoughts are conducive to crystallization in February. No other month offers the same cauldron and ingredients. Even if you are at a stage of life where there is never enough time, February can prompt us to reflect ever so briefly and gratefully on our shelter and ability to cope with icy blasts and thaws alike.

Perhaps it is different for me because my birthday falls in February. Not that I grew up with much of a fuss over my birthday but still, this is my corner of the calendar. It’s not uncommon to see horizontal freezing rain on my birthday, and this is somehow exhilarating to me. Perhaps I don’t have enough drama in my life but February continually reminds me to look for the exceptional in each new day.

My youngest son is experiencing his first February away from home. Having just turned 18 he is making his transition to adulthood studying in Montreal. The cold Quebec winter is challenging his usual inclination to wear running shoes and merely place bare hands in pockets to get around. He tells me he found a great scarf in a second hand store for $2 and it’s wool! Severe cold is teaching him lessons I never could.

I turned 18 in another time and place. I decided to spend six months in France as an au pair. I did not go through an agency, which was in retrospect a mistake, but found a family through the friend of a friend network. I was placed with a family who had a five-year-old girl in the south of France outside of Marseilles. This sparkling, exotic adventure was a big leap but I was ready.

This idyllic situation in an otherwise warm, glamorous part of the world was anything but. The home was isolated, my employer was away from home for 10 day stretches at a time. Her husband was unhappy with the situation, often sullen and worked long hours. Their daughter, my charge, deeply resented that I was not her mother. Rather rapidly after my arrival, their housekeeper was let go and I was told I was also responsible for cleaning the house. To top it off, I was there to learn French but told I had to speak English to their daughter so she could learn my language.

The few days the mother was home in a month it was made embarrassingly clear to me that I was supposed to disappear. I took many long walks to the local village and back but lacked the imagination, courage and language skills to venture much further.

After about five weeks, my 18th birthday rolled around. Nobody in France knew or cared that it was my special day. There were no digital connections back home, no e-mail, Facebook or texting, which we take for granted today. Even long distance phone calls were seen as extravagant so it seemed as though the whole world had forgotten me. I was utterly alone with a recalcitrant five year old. I knew enough not to blame her but my patience was often tested.

That day, despite the unusual chill in the air, I decided to take my equally lonely little charge out to play in the garden. I succumbed to a crashing wave of self-pity standing there in the cold, missing home, feeling profoundly sorry for myself when suddenly I felt it. Could it be? There it is again. A snow flake! And another snow flake. It’s snowing! In the south of France! These beautiful snowflakes fell freely and plentifully from the sky like tiny bits of home and they were all for me. Hope replaced despair, and in an instant that day I grew up.

February is a gift. Wish it away and its subtle wisdom is lost. Embrace it and it might just become your favourite month. 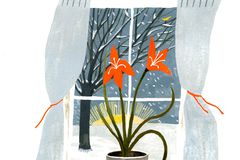 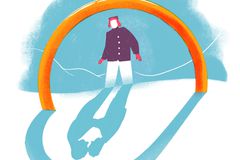 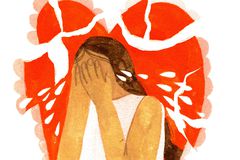 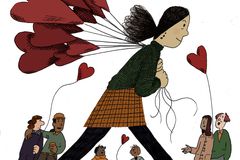