My wife is anorexic with bulimic tendencies. She has spent more than half of her life eating in an outpatient program, and more than 10 years as an in-patient. She is also the love of my life.

I thought I knew everything. In what many doctors called a “miracle” my wife became pregnant. Soon, her weight was precipitously low and her doctors wanted to admit her for involuntary treatment. I was outraged that they didn’t see how well she was doing. I met with her doctor and said, “She is doing well right now, she told me so.”

The deception was the hardest thing to accept, and not just the suspicious trips to the washroom, the food that vanished overnight or the empty laxative boxes hidden in the garbage. My wife was pregnant, and excited about our baby: how could I know that the eating disorder still kept its fierce hold on her? How could I know that every time she avoided food, binged or purged, the guilt about being a “horrible mother” or a “terrible person” cascaded? How could I know that before every pregnancy-related appointment she drank water by the litre, wore heavier and heavier sweaters, and filled her pockets with coins so that the number on the scale wouldn’t disclose her secrets? I thought she was fine, because she said she was.

My wife was hospitalized a few months before our son was born. I cannot articulate the shock when her doctor took me aside, and told me that the hospitalization wasn’t to help her gain weight but to provide “emotional cover” if the baby was born with problems. They wanted her to believe that she had done everything possible for our little boy.

Our son was born in perfect health. We were lucky.

But, by now, our son also knows more than most boys his age. During his 10 years, my wife has spent more than five of them as an in-patient. More than 30 times I have picked him up in the evening and had to tell him that Mommy has gone into the hospital again. Each time he cries and asks why. “To get better,” I say.

I believe that my wife wants to get better – but I know that she also wants the comfort that her eating disorder provides: both the feeling of thinness and the calming of her anxieties.

Over and over my wife’s weight gets shockingly low, causing her to be admitted into hospital (sometimes voluntarily, sometimes not). Soon she promises that she wants to get better, to reach her goal weight, to stay home with our son and to have another baby, and the weight gain begins. Each time we hope that “this is the time.”

But the cycle continues. She begins to feel that she looks normal, despite being severely underweight. Then she feels that she looks “fat,” despite only having gained five or 10 pounds. Then she confesses that she is not going to go to her goal weight, but some other number that she can rationalize. Soon she lowers that number, and lowers it again. She starts thwarting her in-patient treatment and then says the dreaded words: “I don’t need to be here, I can keep gaining weight from home. It’s different this time.”

But it isn’t different. My wife has never gained weight as an outpatient. To add to the pain, she sees our son grow distant while she is in hospital despite the regular visits and evening FaceTime calls. Obviously she must come home: he needs her.

When she does, within a few weeks or if we are lucky, months, her weight will gradually slip. “I just need a few weeks away from the outpatient program to get my focus,” she’ll say. Inevitably there is no eating for those weeks, until I am telling my son why his mommy has gone away again.

Every eating disorder sufferer has their own hell: this is ours. I can only imagine the pain experienced by all of the beautiful women I’ve met through the hospital who have taken their own lives. The girl who made the touching pencil drawing of our son as a baby, the woman who taught him to make paper airplanes, both gone too young. I am fortunate that my wife is not one of them, although she often wishes that she was.

My wife has been robbed of so much: missing high school because she had to go to the hospital after class; giving up her career because she could not be there every day or every month; giving up being the stay-at-home mom that she dreamed of being; giving up hopes of volunteering with our son’s class because the times conflicted with her meals at the hospital.

Her mother sacrificed the last 20 years of her life to help out with daily visits and raising our son, stopping only when dementia took her from us.

I’ve allowed my career to languish so that I can be supportive and would do so again. I alternate between crying at what my wife’s illness has prevented and feeling shame at the anger I sometimes feel toward my wife for not getting better. I now understand eating disorders as much as a non-sufferer can, but doubt that I will ever shake that little selfish voice that says, “Why can’t you just try harder?” If my wife had cancer, I’d never say, “try harder” – so why do I do that now?

Then there is our son. No 10 year old should view Mom being in the hospital as routine. He asks why Mom is always sad, why she cries so much and why they will not let her go for walks. I don’t know what to say.

As with life, there is always sunshine and rain: we are now the parents of a beautiful two-year-old girl, and we are expecting another baby in April who will share the name of the doctor who saved my wife’s life. We continue to love and laugh as a family, far more than we should.

But my wife is in hospital again. We remain focused on recovery and on our future, but we still have miles to go. The battle has a new urgency as we watch our children grow but we’re determined to keep fighting. 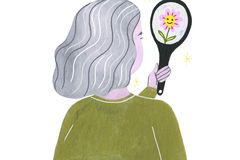 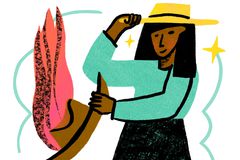 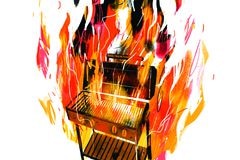