It was our first day after taking possession of the old house and as I slowly walked through, inspecting it room by room, I noticed a tiny hole in the back upstairs window. It was the unmistakably clean hole made by a pellet gun, and from the angle, apparently shot by somebody in the backyard. Who had done this, and when? It was a slightly unsettling mystery that I assumed would never be solved.

Often, when we move into a new home, there is an urge to eliminate anything that reminds us of the people that used to live in our homes. As an architect that makes a living by doing just this for clients, I can agree with the sentiment, sort of.

The reality is that when I walk into an old house, I am always looking for the small things that somehow speak to me about the people who used to live there. People who loved, fought, survived hardships, had children and grew old within these walls.

I carried on with planning the renovation of our new old house. The last area I had to explore though was a dark and tight crawlspace in the basement. I set off on my stomach and began to trench my way to the back. Before too long though, I hit something with my tiny shovel and pulled out a very old glass bottle, its cork still firmly in place and filled with an amber coloured liquid. Cod Liver Oil was spelled out in raised letters on the side, and a search online later that night found a perfect match to a bottle that was dated back to 1896. But why was it still full and why had somebody buried it back there so long ago?

At this point, I made a trip to the City Archives and spent hours thumbing through old documents. At long last, in a special edition of the local newspaper from 1900, celebrating some of the older houses in the community, I saw our house. The description said It had been built in 1870 by the owner of a local lumber company and was still in the same family some 30 years later. Success, to a point, but I wanted more, so it was back to the house to carry on.

Next, after stripping off several layers of flooring in the kitchen, I discovered a perfectly preserved front page of the Saturday Toronto Daily Mail from August 1894. Even then, one of the headlines was of the problem of drugs and concerns about opium in Australia.

I then worked my way up into the attic, where I slept on a blow-up mattress and ate takeout food in the otherwise empty house. One day, while sweeping up pizza crumbs, I saw a small hole in the floor and on closer examination, a loose floorboard. Beneath that, I pulled out several crumpled up pieces of paper, which I carefully pressed out on the floor. Staring out coquettishly, twirling parasols and dressed in floor-length gowns, were illustrations of several women, all stylishly wearing the fashions of the time and, of course, the perfect corsets to go with them. Dated 1906, I held this vintage woman’s magazine up to the lamp and noticed that some of the linework was a subtly different colour from the rest. Looking even closer, I could just make out a faint nude outline of the women’s bodies drawn in pencil below the ornate gowns. Beautifully rendered, right down to their perfect petite shoes, the sketches were artistically done, but strangely asexual, as though the artist had never really seen what they were trying so hard to portray.

The renovation had to continue though, and a few weeks later, our wonderful neighbour came by to tell us that he recalled once seeing an old black-and-white photograph hanging in our house when he had come to visit the previous owner. He had been told that the image was from 1900 and had hung in the house uninterrupted since that time. Surely, he said, it rightly belonged with the house and promised to search for the previous owners and find a way to get it back. Sure enough, a few days later as we walked up to the front porch, we saw an ornately framed photo leaning against the front door, 10 people glaring out at us from in front of the same front porch that we now stood on. No wrapping, no note, just these ghostly faces looking out at us from 100 years in the past, in front of a house that looked exactly the same.

I realized that this photo was probably taken at the same time as the commemorative newspaper I had found, both in celebration of the year 1900. At centre stage in front of the house sat an older couple, the man in a stylish suit with a thick grey beard beside his elegantly dressed wife. Arranged around them were several other younger couples and seated by herself, a much older woman with sunken black eyes and a truly ominous look who must have been the great-grandmother. But also, close, but not too close to her, was a young boy of about 10, looking at the camera, topped with a huge straw hat and standing out clearly as the only one of his generation in the entire group.

And then it all started to come together for me. This young boy must have been about four when his father sat with him in our living room, reading the Saturday comics from the 1894 newspaper we found. He would have been about six when his truly frightening great-grandmother opened up a new bottle of cod liver oil and forced a couple of spoonfuls down his throat. Probably, that same day, when nobody was looking, he stole that bottle and buried it in the crawlspace, never to be seen for the next hundred years. And he would have been a teenager when the pages of the fashion magazine were embellished and hidden below the floor in the attic where his parents would never find them.

That just left the pellet hole in the back window unexplained. That is, until this winter, 15 years later, when I looked more closely at each person in the old family photo. As I enlarged an image I had taken of the young boy, I did a double-take: Underneath his arm, and clasped firmly in his right hand, was the unmistakable outline of a toy rifle. 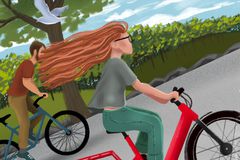 I’ve stopped taking photos so I can replay life’s adventures in my mind
April 20, 2021 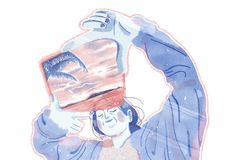 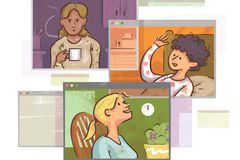