I once had a couple of drinks with Phil, an old friend from university who lived in Toronto and had a mouse problem.

“Once, I saw one in the bathtub," he told me, putting down his beer. "I turned on the water, exactly enough so it had to swim. I left it swimming for a couple hours, so it could just die.”

I squirmed and crossed my legs. I was wrong about liking Phil. The guy was crazy or a little sociopathic. Maybe he wasn’t the kind of person you should drink alcohol around.

But then I moved into an apartment in Toronto a few years later. My opinions shuffled. I saw certain things in a new light. I felt the joy a fresh sink sponge can bring, for example. I understood the refreshing emptiness of the trash can the day after garbage pick-up. And I learned that mice in real life are different than the ones I knew from children’s books; they aren’t cute, not really.

My first mouse-infested apartment was on College Street above a video-rental store. We’d asked the landlord about mice before signing our lease, and he assured us in his kindly, grandfatherly way that rodents were strangers to him. Two months later, when my roommate started screaming and gassed a small one to death with her hairspray, our landlord was more forthcoming: “Ahhhh, yes. Those are the winter mice!”

From then on, our daily routine involved checking traps for furry little bodies and arguing over who had to throw them out. I remember complaining to a friend: “I wish I had a boyfriend ... someone who could just ... get rid of them for me.” “That’s not very feminist,” he told me. And I’m sad to say I looked him dead in the eye and said, “Sometimes lived experience is a little more complicated than theory.”

It feels like everyone who rents in Toronto has a mouse story, and if they’ve moved a couple times, probably more than one. But having mice is a little like feeling unsuccessful in your career: People usually only confess after hearing about what you’re going through.

And boy, do they ever open up: “We had one caught in a trap yesterday. We called him Roxy and he took a week to die.” “I had them in my last place. They would only be in my bedroom, though, since I was next to the kitchen.” The most horrifying story: “I went to the bathroom the other night and I heard a plop. But I hadn’t done anything to, you know, make a plop sound, so I was confused. I got up and looked and - well, there was a mouse in that water. I just flushed. I feel a bit flustered going to the toilet now.”

As I write this, there is a mouse in my kitchen. It’s avoiding the trap, but it’s enthusiastic about anything made of cardboard or paper. My landlord, who currently enjoys half my salary, is vaguely interested in the situation. I let him know, but he just texted me: “Mouse or rat? lol!”

In my last apartment, I learned I had mice about a week after I moved in, when one popped out of a bag of garam masala I was about to use. In the morning, there was a mouse running up the back of the fridge. In the evening, another one sprinted from behind the toilet and out under the bathroom door.

I’d scream every time. I never became hardened. If anything, I get worse with each infestation. But my landlord for that unit, in the spirit of interspecies ethics, gave me an “ultrasonic mouse repellent” gadget to plug into the wall. “It emits a sound that only mice can hear!” according to the box. That night, a mouse pooped under it – in fear probably, I told myself.

I bought my own traps and killed 14 (enough to make a nice little hat, I thought) before I ultimately switched to my preferred method: poison.

I love mouse poison. I love how quickly it works and how you can see when they eat the whole thing. I love when the mice tear open a new box you haven’t even opened for them yet. I love how, after a while, there’s no more rustling and chewing or clawing sounds. “Take it home to your family ...” I’d whisper when I heard the mice digging into a new serving.

Several months into my life as a poisoner, I came home to that apartment jet-lagged and maybe a little depressed from a family member’s funeral in Scotland. All I wanted to do was sleep, but around 3 a.m. loud, panicked squeaks woke me up.

I opened the bedroom door and looked in the hall. There was a mouse on the floor tile in its death throes, running in circles as the poison set in. I closed the bedroom door, put in some ear plugs and went to sleep.

It took me a moment to realize, I’d become just like my old friend and mouse hater, Phil. And I was ashamed. Not of becoming a sociopathic bastard, but for misunderstanding Phil so thoroughly all those years ago.

Heather lives in an apartment in Toronto. She’s killed most of the mice.

Google office? No thanks – I love the odd things I find in our old building
February 7, 2019 In a time of stress, she remembered my nationality, not my name
February 7, 2019 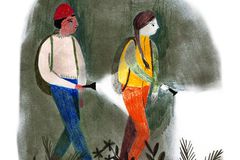 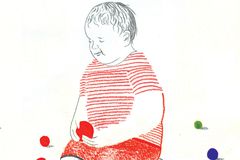