There’s one book on my shelves that’s more important than all the others, and I haven’t even read it yet.

It was the last book my father gave me for Christmas before he died – a memoir by naturalist and painter Robert Bateman. I thought at the time that it was a curious choice, as I’m not a painter. But I did spend a lot of time looking at one of Bateman’s paintings, an eagle, that hung above our fireplace mantle in the living room, a gift from my mom to my dad when I was still in diapers.

I’ve always appreciated Bateman’s artwork and I imagine he thought the book would be inspiring for me because it was a collection of his writings about his life and artistic process. In my dad’s eyes, I was a writer, whether I cared to label myself one or not. “Are you writing?” he would ask me at random intervals over the years after I left home. Perhaps he knew it fed my soul more than I did.

From time to time I pull that red hardcover off the shelf and open the front cover to see the inscription, “To Roz, Love Dad,” in my father’s handwriting. He wrote in all capital letters with a slight slant to the right, maybe because he was a lefty.

When Robert Bateman happened to be in town for a book signing at a local gallery, I went to meet him to tell him how meaningful I found his book. I asked that he sign the second page, because the first one was taken, which he did graciously.

I still delight at the discovery of my dad’s handwriting in random places – old lists buried in drawers, on birthday cards or on the side of a box I’m reusing for a move. I remember the way his hand curled around the pencil when he wrote, keeping score for our gin rummy games or doing the daily crossword puzzle in the newspaper.

I wasn’t there the day my father died. My older brother called me earlier that evening. “It’s time,” he said. “You need to get home.”

I berated myself for living so far away, but this wasn’t how it was supposed to go. This was too fast. My dad’s cancer prognosis was poor but he had been doing relatively well, all things considered. He was about to start another round of chemo. He didn’t want to, but when he learned his first grandchild was due to arrive in a few months, he changed his mind. A bout of pneumonia would soon change everything.

I was on my way to the airport when Dad’s favourite band, Fleetwood Mac, came on the radio. It was the middle of the night during a four-hour drive and my boyfriend suggested I lay the seat back to try and get a little rest. Somewhere on the highway north of Denver, Rhiannon began playing. I thought it was a sign. “Hold on Dad,” I whispered to the sky, “I’m coming.”

He couldn’t. The second call came from my brother while we were still on the road, some time after 2 a.m. I let out a wail like a wounded animal. I couldn’t breathe. “But I didn’t get to say goodbye,” I cried to my brother over and over again.

I don’t know what his hospital room looked like or how those last 24 hours unfolded. I have a picture in my head but those memories will never be mine. I do remember the stunning sunrise from the airplane window when we took off that morning and my belief that Dad wanted me up there with him, above the clouds in the peaceful sunshine.

I also recalled a visit from a month earlier. We had a good time, watching his favourite criminal shows and working on a jigsaw puzzle. I put up the Christmas lights for him while he supervised my work. When I hugged my dad goodbye as I prepared to return to Wyoming, I remember exactly where we stood by the kitchen counter and the way his frail body felt in my embrace.

Dad waved from the doorway as my mom backed the car down the driveway to take me to the airport. A lump formed in my throat, I hoped that wouldn’t be the last time I would see him. It was, and ever since I still find a mix of joy and sorrow in stringing up the Christmas lights.

A few days after my father died, my sister handed me a small dry erase board, the one my family had used for years to leave each other messages. It was a fixture on the kitchen counter with notes like “Went to the store,” “Grandma’s birthday” or “Turn on dishwasher” to whoever went to bed last. One day my mom came home to a single rose, plucked from the garden, in a vase beside the board, which said, “To the head nurse, with love.”

The board ended up at the hospital as a way for Dad to communicate, because the wretched tumour in his throat made talking difficult.

This time the message, scrawled in my dad’s distinct handwriting, read, “Wait for Roz.”

I couldn’t erase those words for a long time. I cried the day I finally did. I put it back on the kitchen counter, where it’s still in use today almost five years later, holding reminders and love notes and thoughts of Dad, always. 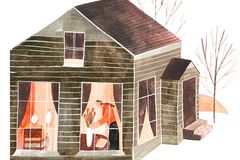 Fifteen years after my son died, I still find ways to celebrate his life
June 22, 2020 After he died, I loved finding the notes Dad left all over the house
June 17, 2020 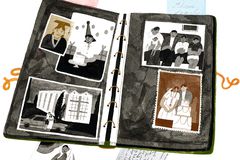