This week, First Person explores memorable encounters and relationships between humans and animals.

If I could wish for any one superpower, it woof be the ability to speak canine.

Oh, I know that some people would consider this a waste of a good wish, just as I know that there are still those who think or say, “Oh, it’s just a dog.” These same people, I have to believe, have never been saved by a dog, never befriended a dog – have never looked into a dog’s eyes.

Such is their loss.

I have been rescued by a dog (RIP Shadow), have many canine friends and I do know, from looking into my current sidekick’s eyes, that there is a whole lot more going on in his mind than most would give him credit for. Samwise is sentient. He wants, he needs. Most of all, I believe, he simply loves. Oh, how I would like to chat with him.

For people such as myself, who yearn to learn “doglish,” this is an exciting time in which to live. These days, dogs (if you haven’t yet noticed) are a pretty big deal. Look at how much space is devoted to dogs at your local pet store: there are obedience, scent detection and agility classes, we can shop in dog-friendly stores, watch more movies and read more books than ever and find webpages galore dedicated to canine health, enrichment and nutrition. Even better, the amount of formal scientific research being done on dog behaviour, communication and health is exploding. A quick Google on canine research will quickly lead you to any number of councils, centres and universities that are working to help all of us better understand our canine friends.

Unfortunately, the overwhelming amount of information also, paradoxically, makes it difficult to learn anything at all. There are so many divergent opinions; so many conflicting theories. Do I use positive training, operant conditioning or balanced methods? Do I tie on a flat collar, chest harness, nose harness, prong collar or e-collar? Do I trust behaviourist Cesar Millan or veterinarian Sophia Yin? Raw diet, kibble, cooked meals, table scraps? Nature vs. nurture? Purebred or mutt?

It boggles. Hence my desire to speak dog.

If I could just be granted the Dr. Doolittle wish of my dreams, I could act as interpreter for our canine companions, speak up for them against all of the many humans out there – experts, trainers, whoever – who have opinions on canine issues and who, far too often, dig in their heels and so loudly argue that they are right and everyone else is wrong. Wouldn’t it be nice to know who and what is truly valid in this wild, wild west of modern canine guardianship? Wouldn’t dogs be the best ones to tell the world who and what actually works for them?

Humans have shaped the world as it is, and now, in our perpetual arrogance, expect everything else – be it dogs, cats, other pets, wildlife – to adapt and to conform. If I could speak to dogs, the first question I would ask them is this: “Is this the world you would have created for yourselves, had you been given any choice in the matter?”

I think dogs would, if they could, laugh hysterically.

Given a choice, they would tell me they would rather run free, and gleefully chew up all the leashes and harnesses that we strap and wrap them up in. They’d approach other dogs freely and with joy, sniffing bums and circling and licking and bowing, rather than be reduced to straining toward each other on leashes or watching each other pass by from behind fences. And, of course, they would choose to live in the scratch-and-sniff countryside where the air is clear and the world is quiet; where retrievers can retrieve and shepherds can herd and pointers can point.

Unfortunately, more and more of their humans are moving into busy cities where working hours are too long and spare time is often hard to come by. There are reckless cars and neighbours that complain about barking, people who are afraid of dogs and so many other dogs packed into too little space.

Too many people still consider a dog a possession to own, trade in or send back if it doesn’t work properly. We “rescue” dogs and then restrain them, take away their inherent jobs and purposes, fence them in, lock them in houses for hours on end while we go to work or shop or get our hair done or go to movies. And we still expect them to behave like angels. People liken them to “babies” and refer to dogs as their “children.” I’ve even witnessed people trying to reason with dogs as though they are tiny humans. They are not. They are dogs. They have their own language. Oh, I hope one day to be fluent.

If you don’t have dogs, don’t like dogs or are afraid of them, please take some time to understand that others do love them and need them, and that we all must find a way to peaceably share this world with all creatures. Responsible dog owners will never knowingly let their dogs do anything to bother you, bug you or scare you. So please, don’t judge all dog owners on the actions of an irresponsible few.

If you do have dogs, watch them, talk to them, get to know and understand them. Please don’t focus on your phone when you walk together; focus on them. Take the time to imagine how the world looks and smells through their eyes and noses. Not enough people ever think to do this. You’ll be surprised by what you’ll learn when you observe and communicate with dogs … in their own language, of course. 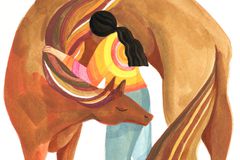 I didn’t become a vegetarian until my five-year-old asked some uncomfortable questions
October 25, 2018 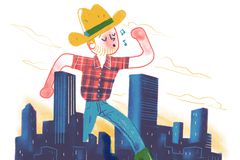