Even before the coronavirus, wearing a mask in public was encouraged in East Asian culture, but as an Asian born and raised in Canada, this practice felt unnatural to me at first.

The same box of disposable masks that my wife and I use today was procured way back in January, well before the virus took over the country. We wore them daily on our commutes to work on the subway in Toronto. She had emigrated from Wuhan, China, years before its current notoriety; it’s a place where public mask wearing is socially acceptable regardless of season or situation. For her, mask wearing was natural and made her feel protected and safe. For me, the only emigration I had ever done was from one part of Toronto to another, so wearing a mask in public was as foreign a concept as not apologizing to someone after they run into you.

We are all now aware that masks are uncomfortable and can make breathing feel like a conscious activity. Unlocking phones with Face ID is harder, they fog up your glasses and when you try to take them off they get caught in the arms, like a clingy symbiote. And if you were a mask-wearing Asian back in January, there’s also the uncomfortable way people looked at you.

Stares and glances from non-mask wearers came with a mix of fear, disgust and resentment – a bitter and potent exclusionary cocktail. This was before we stopped going to work in the office, before the virus had spread outside China and before North Americans began reconsidering the effectiveness of mask-wearing in public. I can understand how seeing me as an Asian wearing a mask could prompt a series of emotional responses: fear that I could be infected, disgust that I even had a mask given the official guidance at the time, and resentment for appearing to be part of a culture that was seen to be the source of the problem.

I remember, too, that mask-wearers also stared, and back then they were almost exclusively Asian. Behind their brown eyes was an understanding, an urgency and solidarity. But also fear. It was still a potent emotional cocktail, but at least it was an inclusive one. They saw in me a fellow countryman who knew and understood the seriousness of possible infection while living in a country that didn’t. But they also wondered if I might be infected, so it would be better to stand a few feet away.

The deep irony is that this is the exact opposite experience of what it was like growing up as an Asian-Canadian. The “real” Asians, the ones rooted in the cultures where mask wearing was second nature, were finally accepting me as one of their own. Meanwhile, I felt rejected by the culture that I often felt more connected to, from the country that prided itself on welcoming immigrants. I have always been a visible minority, but it took wearing a mask to finally make me feel like one.

Things changed in April when the Centers for Disease Control and Canada’s Public Health Agency reversed their guidelines. Face coverings were now to be worn in public, and while surgical masks were still not recommended for civilians, this was due to supply constraints rather than their effectiveness. On this topic, North American health care is finally aligning with the many Asian countries that had previously experienced a similar pandemic; their citizens grin smugly behind covered mouths. For them, mask wearing is already culturally ingrained. For us, it is a new behaviour that needs to be adopted. Some regions are using laws to manage this gap: the city I live in has made masks or face coverings mandatory in public indoor spaces.

I once envisioned a day when it would be safe enough to ride public transit with larger groups of people. Together, we would all wear masks in the same confined space; people of all cultures, no longer divided by belief or by background, but united instead by the same fear of germs that our neighbours might be carrying. Today I know it will take more than guidelines and bylaws to realize this modest vision of unity.

Masks have been politicized, for better or for worse. Mask-wearing protesters around the world have cemented the association between masks and protests, whether they are in Hong Kong fighting to keep freedom of speech in the wake of authoritarian policy changes, or in America fighting for racial equality in the wake of George Floyd’s murder.

In America, the world leader in coronavirus infection, some still refuse to wear masks. This may be rooted in a selfish read of American values, where freedom, independence and self-expression now come at the expense of the community’s safety. These same people might look down at mask wearers, Asian or otherwise, and see weakness, a sheepish compliance or a reluctance to stand out on their own. In truth, wearing a mask is a sign of solidarity; its strength comes from numbers, from the collective action, from the many willing to take a small sacrifice and inconvenience for the well-being of strangers in an unsung and unheroic fashion.

Wearing a mask is not just a proven tactic to fight the spread of disease, it’s also a symbol: it shows the world that you care, both about yourself and those around you. I am wearing a mask now so one day we won’t have to.

The last of mum’s summer dresses have been turned into masks
June 11, 2020 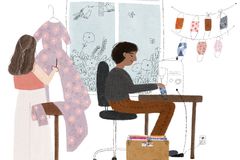 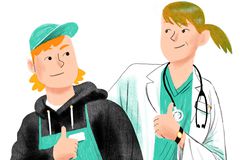 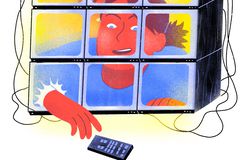