Our deck would never grace the pages of the house-and-garden design magazines that lie scattered on its tables. More clunky and functional than sleek and stylish, it is still, in many ways, perfect. Perfect in its durability, strength and simplicity, its disparate components bleaching to silver unity by the sun and salt.

Perched far forward on our lot fronting the east side of the Salish Sea with only a narrow band of coarse, blue seagrass between it and the ocean, it straddles the interface where the land meets the sea. Gulls drop their cockles on the heavy planks to break them open, and occasionally it becomes a dinner table where otters enjoy a plump grey flounder, leaving the smelly, desiccated remains behind.

The genesis of the deck was a pile of salvaged wood and old pallets on which my wife used to perch a chair to catch some evening sun. Noting the enhanced view, sun exposure and stability, she suggested that we build a deck there. The first version was well-received but was too small for the frequent and often impromptu “happy hour” gatherings and dinners with neighbours and friends. Just exiting the table resulted in more than a few over-the-edge tumbles by slightly tipsy guests. It was a bit like those sliding hand-held puzzles where you move the tiny metal squares around, one move necessitating a whole chain of adjustments.

The deck is constructed from found materials – heavy planks, beams and miscellaneous lumber that washed up on the shore of our island – first scouted on foot and then retrieved at high tide in an aluminum skiff. Some pieces look almost fresh from the lumber yard while others sport rust-stained bolt holes and sometimes old metal brackets – sections of docks ripped apart in winter storms.

Similar to Forrest Gump’s box of chocolates, in beach salvage you never really know what you are going to get. Some pieces are split or partly rotted and require clever trimming, while others come complete and ready to use, nails and spikes included. A large wooden raft that we used to laboriously haul up and down every year, now, with the addition of a railing, forms a section of the deck, its garishly painted green boards gradually shedding pigment. As the weathering progresses, the soft lignin erodes, leaving cellulose ridges like a newly ploughed field. Over the years, as more beach lumber accumulates, the deck continues to grow.

Last spring, a neighbour on our stretch of beach unexpectedly announced that he and his brother were putting their cabin up for sale. This is the cabin that his parents had built in 1958 to help quell the pain of a stillborn son. With the sale made by summer, they played host to a series of final visits with their regular guests. Multiple farewell dinner gatherings were also held with friends on various decks along our beach, all of which provide a slightly different vantage point on the panorama of mountain, sea and sky.

Our neighbour spoke of the relief of giving up the cabin – no more incessant repairs and painting or dealing with clogged septic tanks and crumbling decks. It will now be someone else’s problem. Other times he became quiet and nostalgic, feeling the impending loss deeply. Like the blowing and drifting sand, this place has permeated us. It has remained a constant while the other foundations of our lives – jobs, parents, sometimes spouses and children – have changed or departed.

Life is a beach – quite literally here –and it is the focus of our island lives. Clocks are ignored; tides, swims, cold drinks on the deck and the grand finale of the sun sinking over a distant island, pace us through the day. Each sunset is an endless variation on the same theme, and despite vows of no more sunset pictures, the elements shift and align in new and unexpected ways, sending us once again scrambling for phones and cameras.

On this deck we rediscover silence and the joy of just sitting and observing. The lapping waves and gentle afternoon breeze calm our racing thoughts. Sailboats, gulls and even a floating log become a meditation.

Last year was hot and endlessly sunny. From the news it seemed that the whole planet was on fire, the sunsets colour-saturated by smoke from distant burning land. The newspaper reported Hawaii-like water temperatures on the lower British Columbia coast. We swam often and it really was warm – no hesitation, even as you breached that critical groin level.

From our deck, we view a landscape that is intricate and complex, yet rendered by nature and time with a great unity. The wheat-like seed heads of the beach grass rise out of their stiff mats of brown and blue blades, vertical foils in an otherwise horizontally layered viewscape. Rocks protrude from the sandbar in Zen-like arrangements.

We see all manner of watercraft from our deck. The billionaires’ gleaming white yachts, shark-like and vaguely sinister, propelled at high speed, their engines booming and decks empty, always in a rush to get somewhere. Then there are the obvious backyard projects chugging along, small outboards slung over their sterns and people reclining in aluminum lawn chairs on the stern deck. Close to shore, a flotilla of small paddled craft glide through the water – whole families with dads and moms on stand-up paddleboards, the kids trailing behind in bright green and yellow mini kayaks.

As Labour Day approaches and another summer deck season draws to a close, I already feel the impending loss. Sure, summer officially stays with us for another few weeks, but like all loved and fading things, we begin to mourn them before they are gone. This summer brought the first visit from our new grandson, some time with a recently retired couple finally free to join us, and new cabin construction, the first down at our end of the beach in more than 60 years.

Sitting on the deck with a glass of red wine, I anticipate what the next summer will bring. Whatever it does, we will take it all in from our deck, clunky and functional, and perfect. 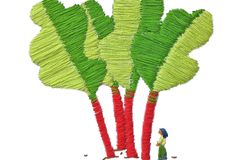 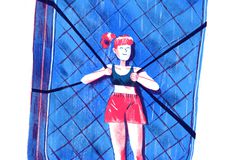 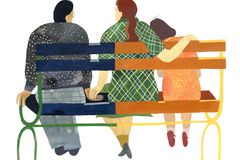