It had seemed like a simple solution, he thought. Stop everyone from coming close to anyone else and so prevent the virus from spreading. Work, live, learn at home. And for the most part it had worked. The curve was flattened and by 2030 things were back to, well not back to, but became a new normal. Social distancing was still practised, of course, and there remained those who wore surgical gloves and masks, mistakenly thinking they were protected from contracting the illness. An illness which had devastating effects on large segments of the global population. A 21st century war.

This morning he could hardly hear the noises made by the others in the house. New construction materials and drastically changed designs kept everyone apart, in their own space, ensuring that the virus would not be transferred from one individual to another. Breakfast came to his cubicle via the sterilized food conveyor, prepared and presented just as he had ordered. Now the walls became transparent and all of them could see, talk and eat together. At a distance, but together, separated only by the thin membrane which kept them safe from each other. It was a far cry from communal meals his parents had described: a peck on the cheek, a hug, pass the syrup, grab the briefcase and leave. How things have changed, he thought.

Outside, he started his 15-year-old 2021 RunAbout. It still ran on gas, if only enough to get the necessities of life – food, water, medications and essential snacks. So it was that most of his requirements were satisfied by drone deliveries to the door. But there were a few things he preferred, and was permitted, to get in person. Wine, cheese and bread among them. Old habits died hard and he enjoyed searching out the vintage, age and texture of these gourmet treats. The ancient hybrid car used only a litre of gas in an entire month thanks to the long-life rechargeable batteries and to the fact that he drove only five kilometres a week. Today he would fill up – five litres. That should do it. The price had fluctuated and come to rest around $100 a litre. Not such a hardship. But the newer vehicles, shuttle craft, used even less. “Gorgee, in my space, lock the doors, close the windows, turn down the AC, turn off the lights, make the bed and sterilize my bathroom” he commanded, reminding himself of the communicators on those old Star Trek movies. Once fiction, now reality.

In the early days of COVID-19 and its successor COVID-21, it was not easy to distance oneself from other humans. Now, technology helped. Devices with holographic capabilities were commonplace, like the old smart phones. Remotely controlled devices followed, providing a means of doing just about everything at a safe distance. Even feeding the dog.

As a senior research scientist he had access to the newest and most interesting advances. It did, however, require him to travel a kilometre or so, to the plant, to ensure that the robotics were behaving and following the protocols defined for them. Today was his weekly foray into the world outside home, to a workplace. His work life was vastly different from the way people worked pre-2020, when people, in groups, went to work, stayed there, and were paid based on being there a prescribed length of time, and then came home. They held team meetings, had a coffee break and did lunch, whatever that meant. All part of a past, different way of living.

Manually navigating the neglected concrete walkways onto the nearly vacant roadway, he directed the RunAbout to drive him to the lab. Along the two-lane road the open spaces were familiar and, at this time of the year, lush and green. The air was fresh, absent of the smog that had been present only a few years ago. With most people working from home, telecommuting, pollution from fossil-fired engines in cars, trucks, planes and ships had dropped quickly and dramatically, and the greenhouse effect was a thing of the past. Most travel, including business trips, had evaporated. Now, the air had cleansed itself and become the stuff of poetry, warm breezes and fresh scents. Asthma and other respiratory aliments were history, along with polluted water and dying sea life.

His arrival timing was perfect, thanks to the scheduling software and a direct EHD (extreme high speed) satellite link to the RunAbout. Several loads of materials had just been unloaded and placed into position for use by the factory robotics. With absolute precision the factory ingested the raw materials, consumed them and continued 3-D printing replacement parts for medical ventilators. On the far end of the building, a group of robotic machines sanitized and loaded the completed parts into gravity-propelled vehicles to be sent to other, similarly operated locations. The experimental code he had defined and put in place had been duly executed by the AI-controlled devices. The parts tested okay and were ready for shipping. His work here was done.

But not before he sent his pay request for the number of units produced by his new method. The exchange credits applied to his profile would allow him to order that new outdoor cooker he’d wanted for some time now and have it delivered. It would be good to cook a meal outside once a month and talk to his neighbours. Maybe even exchange food with them, keeping a safe two metres away, of course.

Along the roadway home, road crew robotics were busy repairing the few potholes that persisted despite advances in surfacing materials and reductions in traffic. Pity, he thought, that driving had become such a utilitarian activity. Didn’t he remember reading about something called a Sunday drive? To a family destination, for Sunday dinner? The holograms were good, really good, but not the same, he suspected, as being with real people. How long, he wondered, would it take for everyone to feel comfortable in this new environment, this new way of living? Before COVID-25, he hoped.

His mask slipped slightly as the gull-wing RunAbout door opened. He was always a little nervous on these outings and it would be good to be back inside the house again, where the air was sterile. The N-200 mask would ensure that he didn’t bring anything undesirable into the house. Just inside the first door the sink squirted soap on his hands and then water to rinse them. The electronic dryer caught the drips. Passing through the interlocked second door, he exhaled softly. There. Safe for another week.

Kissing hello through the wall membrane wasn’t like the touch and feel of human skin but, like so many things, they had gotten used to it as part of the solution.

Frontline workers can’t hear me shout, but I feel better any way
April 26, 2020 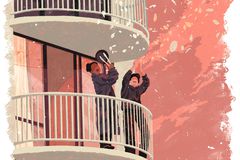 Getting creative in the kitchen makes my life seem normal
April 22, 2020 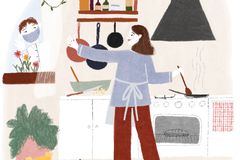 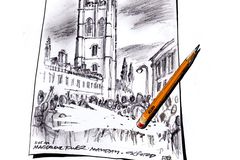