Every weeknight at 9:30 I go into a small room in my apartment, sit down at my digital piano, plug in a pair of headphones and put them on. I pick up a music book, open it to page one and place it on the piano in front of me. I take a deep breath and exhale, and then I play a G with the third finger on my right hand, and a G with the third finger on my left hand, two octaves apart.

This is how Bach’s famous Goldberg Variations begins. The opening section, the Aria, takes about six minutes to play, and lays the foundation for the 30 variations that follow. The aria is very slow and graceful and gorgeous. I have loved it for 50 years, since first hearing the 1955 Glenn Gould recording when I was high school.

After 40 years of playing guitar, I finally decided it was time to teach myself my favourite piece on an instrument I’ve never played. I’ve been struggling to learn it for more than six months now. I’m a beginner, a lousy sight reader, my sense of rhythm is wonky, and I have no understanding of music theory. It takes me forever to memorize a piece. But I couldn’t be happier.

When I do manage to play the notes exactly as Bach wrote them, I feel as though I have moved to another level of consciousness. The day-to-day world falls away and I feel alive and energized. Playing Bach can be so intense and so addictive there are nights when I have to force myself to stop and go to bed.

She doesn’t know it, but concert pianist Angela Hewitt is responsible for my new obsession. I heard her play the Goldberg Variations, non-stop, for 90 minutes last year. I sat completely transfixed in the seventh row at the Chan Centre for the Performing Arts at the University of British Columbia. When Hewitt finished, she sat in silence, motionless, visibly drained, for what seemed like minutes, before the applause erupted. It was an extraordinary performance, the best classical music concert I’ve ever been to.

The next day I wrote her a gushy fan email. “How did you hold the architecture of such a complex and varied piece of music in your head so that everything connected and everything flowed and everything made sense?” I went on and on, praising her performance as “magical” and “wonderfully emotional and expressive.”

I didn’t expect a reply. I’m a nobody, a gushing fan. But two weeks later she graciously thanked me for my “appreciative feedback.” And that’s when an idea popped in my head: I could learn to play the piano and maybe share a tiny sliver of the experience she’d had at the concert. Maybe I could learn that opening aria.

My idea wasn’t completely crazy. I knew how to read music. But I played solo guitar, and surely piano, not guitar, was the ultimate solo instrument. Everyone knew that. I thought about the thousands of hours I’d spent playing the guitar. Such a waste.

In April I rented a cheap digital keyboard and taught myself the opening bars of the Goldberg aria and a couple of easier classical pieces. I started lessons with an extremely patient teacher who spoke softly and wisely about musicianship, Bach and Gould as she corrected my technique and my many misinterpretations of the Goldberg score.

I was hooked. In June, I tried out digital pianos in a downtown music store, playing as quietly and unobtrusively as possible. It’s hard to evaluate an instrument when you’re a beginner, but I plunged ahead, made my decision and bought what seemed like an appropriate model. When the salesman closed the sale, he praised my “enthusiasm” for music and I laughed.

I play five nights a week now. I love the way music ends my day. I think learning a new piece is like scaling a mighty mountain one shaky step at a time. You must follow a path and maintain a sense of direction. You can’t improvise, and you can’t skip the notes that are hard to play. You’re learning a craft and exercising discipline.

And soon, perhaps tonight, I’ll start work on one of the slower Goldberg variations. I’ve already tried out a bit of No. 25, which begins with an easy two-note chord in the left hand, followed by a seven-note melody in the right hand. My fingers find the melody without effort: first D and then its neighbour E flat, back to D, down to C, and back to D, twice, and then a lovely leap up to B flat. It is sad and gorgeous at the same time. I try to play the notes as slowly and tenderly and clearly as Gould does.

The process can be slow and tedious. Sometimes I despair over a difficult passage, and then quite mysteriously, the notes begin to flow by muscle memory, so I can begin to think about how to play the notes, not whether I can play them. I’ve moved a good distance up the mountain. I know I’ll never reach the top but that’s okay because I can already feel a change in the air, and see a new landscape below me.

#winterlove: How baking pulled me out of my depression, and brought me closer to my neighbours

'The piano has a story': Musical relic with scars from Halifax Explosion on sale
November 21, 2017 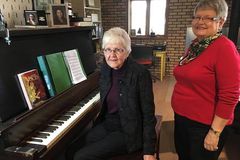 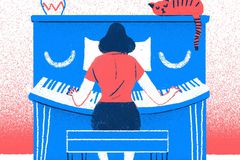