When I was 12, my appendix burst. Six days later, I was rushed into emergency surgery as doctors had initially written off my pain as the flu, impending womanhood or preteen drama. After the surgery, they explained that they had to take out part of my colon as a result of waiting so long. My parents were upset. The doctors felt terrible. My best friend was annoyed that she had to complete our French project alone.

I, on the other hand, was elated, as I not only got out of Girl Guides that night, but semicolons were my favourite punctuation mark. An avid talker and voracious reader, I appreciated anything that could prolong a sentence or thought. Possessing a literal semicolon meant that I’d always have a fun fact to share in get-to-know-you games, although it isn’t the best icebreaker when talking to the cute guy sitting next to you on the bus.

I was always a writer. I read and wrote early and often, preferring the worlds in books to my reality. In stories, I could bounce from adventure to adventure, ensuring a happy ending of sorts. In actuality, I struggled to find joy in reality. As a child, I would spend recesses hidden by trees with the comfort of a story, book after book of journeys punctuated with joy, sadness, confusion, and excitement. Amongst my own friends, I was a secondary character, used to push forward the narratives of those around me. But between the covers of books? I was a primary character, the protagonist, travelling to different worlds and times, fighting the dementors at Hogwarts. Alhough unable to fight the demons I faced daily in the mind’s eye, I could save the entire world from my couch in a book.

It’s no surprise that I became an English teacher, hoping to foster a love of reading and writing in a new generation of dreamers. However, in the ever-changing world of Netflix, iPhones and Tinder, reading no longer brought a sense of adventure. What had punctuated my life with so many exclamation points felt like never-ending rows of commas for my students. In fact, the only time they seemed to punctuate any part of their lives with feelings about reading was to lament the loss of their TV time to something as boring as To Kill a Mockingbird, and question how I could have picked such a boring book.

Didn’t they know that through reading, they could become Scout, discovering the world for the first time? That in books, they could be Atticus, a fierce social justice warrior doing what is right, no matter the cost? Or become my personal favourite, Boo Radley, a misunderstood reclusive hero? Couldn’t they see the value of getting lost in a story, imagining themselves as a hero, a fighter, a lover?

I never shamed my students for reading, giving similar value to Twilight, Hamlet, and Sport’s Illustrated. Reading was reading, word after word punctuated to perfection, often exactly what each reader needed at the time. I didn’t care if they were reading Joyce or Jughead; a story is a story. Full stop.

As I worked at helping my students, my love for reading waned, as nothing could hold my attention any longer. I stopped seeing myself in the protagonists of fictional stories, and started to see myself as an antagonist in reality, ruining the lives of those around me, sucking the soul from those who deserved joy. I no longer found any joy in reading, but saw my own demons reflected on the pages.

Perhaps this should have been the most telling sign, that something that had brought me so much joy now only brought me anger and boredom, a strange combination.

I slowly stopped reading as the insatiable needs of my teenage students consumed me. I lost myself in their problems, lending an ear when they needed it and losing myself more and more as I helped them find themselves.

The summer after I turned 29, I checked myself into a luxury rehab centre for severe anxiety and depression. I had started to feel like I was living my life in parentheses, as though my entire entity could be removed and sentences around me would not be altered. As though my existence was merely an additional, unnecessary part of those around me, easily omitted and unimportant. Entire days would disappear into the abyss of parentheses. Speech that should have been in quotation marks became indirect, no longer interacting with those around me but instead inside my head. I stopped asking questions about the world with the sleek, curved, sexy, question mark, and instead started adding this mark to statements about the purpose of my existence.

I spent two months actively fighting my illness. Conversations punctuated with questions marks, exclamations of both joy and anger, and many, many commas occurred daily. I cried. I learned. I grew.

I wrote a new chapter in my story.

I continue to value the semicolon and it is no surprise to me that the semicolon is often used as part of a movement to bring awareness to depression, mental illness and suicide. Many will draw or tattoo the punctuation mark on their skin to remind them that they are choosing to continue the sentence/their story.

I think about using a period every day, ending the sentence rather than persisting. Sometimes this is a fleeting thought, others it is a serious contemplation.

I work to punctuate part of my days with exclamation points, so as not to become complacent in my depression. When I feel like my day has disappeared into an ellipsis of apathy, I try to do something to bring back some sort of spark. I bake cookies, I dance naked or I laugh until I cry. Occasionally I run, but this kind of typical and healthy means of coping has never been for me. I live hyperbolically, manically enthusiastic with long interludes of intense depression. There is no grey area of my mind in which to escape.

Books are my grey area. Stories give me an area between the happy and sad, where I just exist, on the pages and in actuality, outside of my own head.

I could end my own story; instead, I’ll write on.

Trees are like people: As I prune, I’m reminded of the people I love the most
January 24, 2019 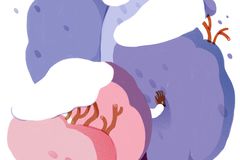 Sometimes, poetry is the best therapy I can find
January 23, 2019 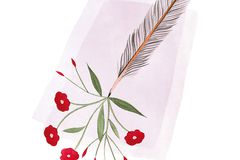 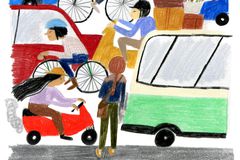