Depression is an ongoing state of misery, like a mental UTI with no antibiotics in sight. And while as they say, “misery loves company,” I’m not sure it’s true in reverse. Though most depressives seek solace from others, a respite from their own unpleasant internal monologues, theirs is often not the company people wish to keep: After five minutes in any social gathering, I could pretty well clear the room.

At 52, and on the brink of menopause, I fell into a deep depression that lasted three years. Though the overt causes were numerous and complicated, and to a certain degree understandable (my father had died and my mother, as it turns out, was terminally ill and my career had gone further south than Miami), people couldn’t understand why I felt so lousy.

In the end, like with many things in life, I had to figure things out for myself.

I left my soul-sucking job and pursued part-time work. I took walks in the fall morning light. I picked up tennis again, a sport I had once adored but in my lassitude had ceased to enjoy. I prepared a good meal.

And then one day, I decided to tackle my house.

In the three years of my mental undoing, our home had fallen into a similar state of disrepair. If I was going to attempt the challenge of clearing my head, why not begin with my nightstand?

Tidying a surface of 40 cm² is how I began my journey back to health. I started there and didn’t stop for the next year-and-a-half, until I had cleared and fixed up my entire three-storey home.

As I recycled old files and mounds of paper, gave away or threw out broken furniture, recarpeted and redecorated, I found my own mind airing out as well.

What had taken me in the previous years hours or even days to accomplish, I could now check off in a matter of minutes.

As my mind freed itself of the clutter of anxiety and regret, I was able to function not only as well as I had before I had fallen ill, but several cylinders faster.

And this heightened awareness and effectiveness got me reflecting on the other contributing factor to my depression. Namely, the big M.

People love to go on about everything that starts to go wrong after 50, especially for women. Memory and bone-density loss. Weight gain and depression. Menopause, at least in North America, is considered an ailment, something to be treated and dulled with hormone replacement therapy and a stiff upper lip.

But as I discovered with my own passage through the tumultuous early 50s, menopause is more a process than a blight, and if we’re open to it, a period of wonderful unfolding. If we can navigate the shoals of anxiety and self-doubt, the current of fluctuating hormones can push us out to a sea of much greater possibilities. Once I stopped and listened to its clarion call, my brain went into creative overdrive. I returned to freelance writing and photography. I began to sell my photos at auctions, and write with conviction about topics I had feared for their complexity.

To paraphrase the Pulitzer Prize-winning columnist Connie Schultz, in our 50s, while our midriffs expand, so does our wisdom.

The decade often begins in a kind of mourning. With a loss of their cycle and its procreative powers, many women feel their attractiveness fading as well. But if we can (re)imagine menopause as simply another phase of our womanhood, and not the end of it, the decade can often end with a renewed sense of self, a rebirth of sorts.

Dr. Christiane Northrup, a specialist in the menopausal spectrum, likes to call it “a wake-up period for the soul.” With the surges and reductions of estrogen levels in the body, things that are normally hidden surface. She compares the menopausal time frame to premenstrual syndrome since in both situations spiking hormones influence a woman’s perceptions and, consequently, her behaviour.

Not surprising, then, that women in both stages are characterized and caricatured as moody and unpredictable. But according to Northrup, that’s really the point. Without slipping too much into new-age axioms such as “in progesterone lies truth,” Northrup maintains quite credibly that a kind of individuating process is taking place. Realizing that their time as primary caregivers of children is now behind them, menopausal women are often in a position of searching out new roles for themselves. Northrup describes the movement away from self-sacrifice to the family unit toward self-exploration as a kind of adolescence in reverse.

So it was with me. As I quite literally cleared house, I unearthed parts of myself that had laid dormant for years. After all, as all good Jungians will tell you, the house is a metaphor for the soul.

The onset of menopause can present itself (as it did with me) as an emotional crisis. But, as with all self-respecting crises, it can lead to positive change.

While I certainly didn’t enjoy the menopausal preamble, I am now reaping the rewards of the passage. Women need to experience the agony of hormonal fluctuation in order to derive the accompanying ecstasy of a new and emboldened self.

And while it’s true that I have gained a stubborn 10 pounds around my middle, emotionally I have never felt lighter. I’m immeasurably grateful for my renewed intellectual vigour and creative output, and happy, so happy to share it.

Turning a page in my life also meant confronting my piles of books
May 2, 2018 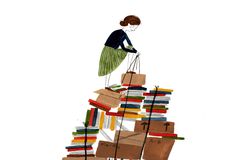