Erin Hershberg
Contributed to The Globe and Mail
Published May 10, 2021 Updated May 10, 2021
Comments
Text Size
Please log in to listen to this story. Also available in French and Mandarin. Log In Create Free Account

In 2016, I’d walk past pregnant women on the street – who were also toting toddlers – and we’d smirk in solidarity, seeing in each other that hilarious combination of strength, exhaustion, fear and resilience that is motherhood. While our sameness, to a cynic like me, might have seemed banal, it was truly comforting, pushing me out of my solipsism and filling me with a sense of interwoven community that felt beautiful. I was never one for clubs but this one certainly had its strong suits.

I was a happily married mother of a one-and-a-half-year-old girl and pregnant with my second child. The three of us had moved out of our downtown Toronto home for renovations that would accommodate our growing family. I was one of the lucky ones, living a privileged life of common experience.

I distinctly remember the moment I felt the neatly woven rug my humdrum motherhood provided get yanked from underneath my feet. I was riding on the elevator to the Labour and Delivery floor of the Mount Sinai Hospital with a woman who was just as pregnant as me. She was heading up to have her baby but I was on a different path. My route was to the labour triage to confirm my son’s heartbeat. I hadn’t felt him move that day and it didn’t seem right. On our ride up, the woman and I looked at each other with that familiar mom smirk, but for me, the warming sense of commonality was starting to fade. She may not have known, but I was almost sure: We were no longer in the same boat.

When I gave birth to a five-pound stillborn 35 weeks into my pregnancy I didn’t just feel alone, I felt black-balled. My anger fuelled a myth that I was not only no longer part of a club, I was forcibly removed. Yes, I was still a mother but without a new baby to accept the milk my body had mockingly produced in droves, I wasn’t mother enough. For months after the loss of my son, still bloated with the remnants of pregnancy, I felt a blow to the gut every time I saw a pregnant woman, a mother of more than one or even just a contented family. I was winded and the tiny daggers the everyday seemed to put in front of me made it harder and harder to catch my breath.

By the time I lost the baby, my daughter was just over 2. When I was pregnant, she witnessed me growing bigger and bigger and used to rest her head against my belly to feel her brother kick. She knew she was going to be a big sister. When I came home from the hospital, I was so afraid of what she was going to say – would she touch my belly like she often did to greet her brother, would she ask where I had been? But, she did neither. She just bounced into my arms, like she always did, and continued to be her.

About two weeks after we were settled into our loss, my daughter gently rubbed my belly and excitedly said, “baby inside!” That was the first time she had mentioned him since he had been gone. I barked back sternly, “No. There’s no baby.” She cried briefly and never mentioned him again.

I have no idea what, if any, impact my loss will have on my daughter when I do finally gain the courage to tell her what happened. But, I do know that it was her adaptable nature that eventually made me accept the erasure that time gives to pain in order to rejoin life after trauma. And, witnessing her innate ability to persistently move forward as she grows, has guided my approach to the current pandemic (this club to which we all now reluctantly belong).

No one could have ever imagined the course the pandemic was going to take. And, certainly, no one on Earth would wish for the year we all have shared. But, for those of us who have been (obscenely) fortunate enough not to have lost someone to COVID-19, the pandemic has offered us some inspiring moments; flashes of beauty that illustrate how uniquely resilient we are as human beings.

Four years almost to the day that I gave birth to my deceased infant, I looked down from my bedroom (where I was in the midst of a Zoom yoga class) and saw my parents in the yard with my sparkling six-year-old daughter, and totally wild two-and-a-half-year-old son. The four of them were in a pandemic symphony – my father, masked, seated on a chair reading from a distance to his intent grandchild, covered in guacamole, and my mother smiling gleefully from another corner, six feet away. To me, this imperfect portrait of the pandemic is truly human life, and that’s okay. 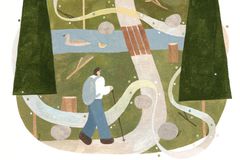 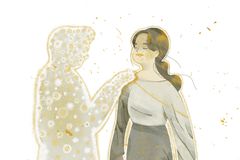 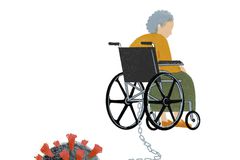