“A nightmare about the end of the world woke me.”

“I have to stop reading the news before bed.”

We begin each day with the same question: “How did you sleep?” It has preoccupied us since the children arrived with their nocturnal needs superimposed on our requirement to function at work the next day.

As a toddler, our oldest daughter slept as lightly as a hungry coyote in winter. At the end of a long story-time ritual comprised of a minimum of three stories, I would nod off and be woken by her pointy elbow jabbing me in the ribs. Eventually, she dozed and I would slither off her bed and crawl toward the door, avoiding the known squeaky spots in the floor.

“Where you going?” she would call and back I’d go to sing an album-length repertoire of show tunes, nursery rhymes and folk songs.

None of our three daughters, all adopted from China as infants, slept well for their first few years. Undoubtedly, this related to the upheaval in their young lives, the change in language, food, smells, sounds and the sudden onset of constant, devoted attention. We were all hyper-vigilant. Their anxiety and need for reassurance that we wouldn’t disappear manifested itself in sleep disruption. They checked in constantly. They demanded proof we were permanent and consistent.

From their arrivals between 1995 and 2001, and through their toddler years, we demonstrated our commitment by showing up at their bedsides whenever hailed. Our youngest daughter, a determined and athletic child, began hurling herself out of her crib at 18 months when we didn’t come fast enough. By child No. 3, we understood the importance of responding to their cries but, having lived six years as severely sleep-deprived adults, we weren’t so quick any more. Sometimes we debated for a minute.

Her head would appear in the doorway haloed by the hall nightlight.

Soon, she didn’t bother calling us. She would stand on my side of the bed and I’d wake with that feeling of being watched. Eventually she abandoned her crib and slept on a camping mat beside us on the floor, her small hand nested in mine. My arm numbed from dangling over our bed, and woke me with pins and needles an hour later.

The coffee pot became the sleep-o-meter, the aroma of fresh brew at all hours of the day an indicator of events the night before. The coffee budget increased as the diaper budget decreased. I created a new wardrobe called nap wear – mostly flannel pyjamas worn on days off, perpetually primed for sleeping should the opportunity arise. I began to understand people who wore pyjamas to Walmart during the day.

Gradually, the children grew less anxious and they learned to sleep and we recovered our sleep mojo. Then, the eldest learned to drive. We feigned confidence and went to bed before her curfew. We turned on the porch light, left a living-room lamp on and closed our bedroom door. But I lay awake listening to the night noises of the house – the gurgle in the toilet tank, the dishwasher churning in the kitchen, the dog snoring under the bed. The digital clock burned the passing hours until the car turned into the driveway and I heard her footsteps thump up the stairs, the dog harrumph and woof as the front door slammed and the lock clacked behind her.

In the past few years, my husband has developed sleep apnea and restless legs. Simultaneously, I entered menopause. We thrashed, sweated and panted in bed – but not from sex. The bed tortured us. We changed mattresses, installed blackout shades, covered the glowing phone and clock with tea cozies to render the room dark as a tomb. It didn’t help.

With all beds occupied by our three teenagers, and the couch a sway-backed, sciatic nerve crusher, I retrieved the camping mat from the garage and slept on the floor with the dog. My husband twitched like Elvis all night, his vibrations reaching me like earthquake aftershocks. I lay alert and waiting between long pauses in his breathing, ready to shake him awake.

“Did you sleep?” I asked every morning. “No.” Anxiety about his not sleeping grew. Heart disease and stroke run in his genes and the seedling of worry sprouted into a stout shrub, its branches slapping my nerves. I was hyper-vigilant again.

Finally, he acquired a physician-approved CPAP machine for the apnea. After living in the same rut for 37 years we changed sides in the bed to accommodate his new device which sits like a Star Wars sex toy on his bedside table. Curiously, my perspective has shifted with my new sleep location. Though he sounds like Darth Vader when he applies his breathing mask – which has a long, elephant-like hose connected to his machine – and he looks like a member of the Fukushima clean-up crew, I think it’s sexy. That’s what a return to good sleep does to your thinking.

Sometimes, I still wake up with a wad of worry in my gut, especially since our oldest daughter left home in September. Is she okay? When will she come home? Is she eating well, and, most importantly, is she getting enough sleep?

The sleep report, which I associated for years with parenting, is now a conversation opener and connector. Every morning, swaddled in our flannel pyjamas, I pour my husband a hot shot of espresso – a liquid defibrillator. We stand together, cups poised in our fingers taking quick sips that jolt us awake. We mumble “How did you sleep?”

What does the Loblaws bread rebate mean to my Italian grandfather? Not much
March 22, 2018 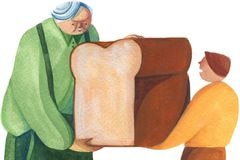 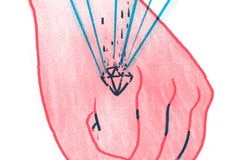 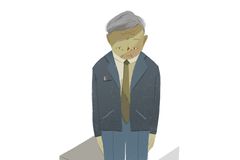