On Saturday nights, my Gram would curl her white-blonde hair, paint her long pointed nails an arresting shade of red and then, with a swipe of a gold tube, add the same crimson colour to her lips. This was the preamble before meeting up with her other widowed friends at one of the many bingo halls that dotted Toronto in the 1960s. Opening her deep, black leather handbag with the gold knot clasp, Gram would drop in the Crown Royal drawstring bag that contained her bingo chips. Amongst the red, blue and orange plastic markers were her “lucky charms” – little animal figurines collected from packages of tea and boxes of soap, which would be placed along the top of the cards in order to invite the bingo gods to deliver a jackpot of $100. If she was lucky, maybe more.

My paternal grandmother, Marguerite or “Mike” to her friends, was widowed at the age of 45. Her husband, George, had come home after the Second World War but was dead 12 years later by 50. She never remarried. Next to my father, there was no one who could make me feel more understood and accepted than Gram. My parents, brother and I lived with her for nine years, and she was a constant support in my life. Her unconditional love was one of the foundations of my development. Which is why, on the Saturday nights she went out to play, I would try to stay up until Gram returned around 11:30. I’d wait, and ambush her as she tiptoed through the front door.

It took her a while to get back because after bingo, Gram and her friends would trot along to one of the local taverns, entering through the swinging doors marked Ladies and Escorts. There, one or two glasses of beer would be consumed from slim tumblers with white fill lines at the rim. The lines guaranteed a legal pour in those days so the tavern was forced to fill the glass with beer and not foam. Many years later when I moved into my first apartment Gram passed the glasses on to me. I never asked her how they’d made it out of the tavern.

Quietly, so we didn’t wake my parents, we’d sneak into the kitchen and raid the fridge. First, we would brew some tea in the ancient metal teapot. The interior glistened with a patina created by years of Tetley tea bags and endless pours. In the winter, Gram would keep us warm by opening the oven door and lighting the gas pilot. We would pull the blue and gold plastic brocade chairs closer and warm our frigid toes on the open door.

She would prepare a few clandestine snacks. My favourite was cheese and onion sandwiches. Thick slices of whole wheat bread would be slathered with Miracle Whip first. Not mayonnaise – only the sweet, tart and creamy spread would do. Then, impossibly thin slices of white or yellow onion would be arranged in a semi-transparent layer. Next, a sharp, aged yellow cheddar cheese was added. Long, oblong pieces were lined up side by side with no overlapping. Finally, a few grinds of black pepper were added and then the top slice put in place after it, too, was slathered with the piquant whipped topping.

While sipping steaming, sweet, milky tea and nibbling savoury sandwiches, Gram would tell me about her night. The numbers missed, the jackpot won (or lost) and how some nights someone would win more than one pot. I learned the differences in bingo strategy – between a full card and the outside square; which games were the easiest; and how to manage several game cards at once. I sat at full attention, making mental notes for future. I couldn’t wait until I was old enough to spend my Saturday nights doing the same thing.

Those nights were just between Gram and me. I did not have to share her with my brother or my parents. We would talk about whether the Leafs won, and about what I was doing at school. We talked of nothing and of everything at the same time. Some nights, Gram would recount stories of my dad and my aunt when they were children, or about me when I was a baby. Our family was small and our history scant, so her stories filled in many blanks. One favourite tale was the morning she was carrying me downstairs for a bottle when I was just a few months old. While quietly making her way to the kitchen below, she heard the whines of Taffy, the family dog, and her new litter of puppies. They, too, were looking for a morning feed. Halfway down the stairs the puppies burst free from their pen and all 13 of them scampered upstairs to greet her. Trying not to drop me and navigate around the wriggling puppies she then felt the elastic let go in the top of her flannelette pyjamas. By now she was also in front of the large glass front door. As her bottoms fell to her ankles, she looked up to see the postman coming up the front walk. She quickly held me in front of her, to avoid being seen in the most embarrassing of positions. My grandfather, wakened by all the commotion, eventually came to our rescue.

Eventually, our eyelids would droop, and it was time for me to head off to bed. “Night, night,” Gram would whisper and give me a conspiratorial wink. That wink made me feel our time was something special – a secret between just the two of us.

Occasionally now I pull out the Miracle Whip, some good cheddar and thinly slice some onions. The sandwich will fill my stomach, but the key ingredient, the one that filled my heart, is missing. 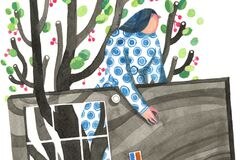 Keeping track of my family ancestry is for the birds
March 7, 2018 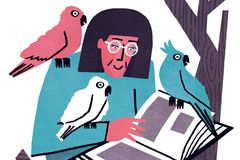