I was relaxing at home, having adroitly manoeuvred a situation whereby my parents and three younger brothers were on vacation in Nova Scotia, and I was back in Etobicoke, having quit my summer job in Halifax to return early to the Big Funky (as my friends and I called Toronto) and party. My folks were definitely not impressed.

The phone rang. It was my buddy, Grant.

“Hey man,” he said. “There’s a rock festival this weekend in upstate New York. I think it’s called Woodstock? Anyway, John (he didn’t actually say John – in our cool lexicon we employed last names only) and I are going. Want to come?”

Did I want to come? Had the Leafs won the Stanley Cup just two years earlier? Yes!

It was on. At approximately 6 p.m. on Friday, Aug. 15, Grant and John picked me up in John’s mom’s suburban-ubiquitous Ford Falcon. Major uncool.

It was a far and plaintive cry from our dream car, the magnificent Dodge Charger, destined to become an automotive classic. (For reference, kindly view the chase scene from the greatest movie in history, Bullitt, made in 1968, starring the god-like Steve McQueen.)

But the Falcon had wheels. And the boys had thoughtfully affixed a new Canadian flag to the aerial. Excellent. We were off.

We drove down the highway from Toronto (with traffic that seems quaint today) to the border crossing at Buffalo, N.Y. Typically, we’d cross into the United States by answering a couple of elementary questions: “Citizenship?” “Purpose of your visit?”

And that was it. Identification was almost never required. But on this evening, things were different.

“Where are you young guys off to?” the U.S. immigration officer asked. “Ah, Woodstock,” John replied.

“That’s the magic word,” said the officer, with, I discerned, a slight smile. “Everyone out of the car.”

We quickly vacated the vehicle as a thorough search for drugs got under way. We had no drugs, just unsightly mismatched garb and lathered on cologne (patchouli oil was my bad boy of choice), that undoubtedly made it seem like we were transporting drugs.

The search completed, we resumed our journey, more confused than shaken.

“What’s so special about Woodstock?” I thought.

By now, it was dark. We hit the road again, driving through the night. It rained in sheets.

As dawn came up on a sopping, humid Saturday, we were astonished to see cars – hundreds of them – abandoned on the sides and median of the highway.

For six hours, we barely moved in oppressive traffic. John remembers a New York State trooper telling him, amidst a downpour, that we could go no further. We pulled over and parked. A long-haired, scraggly hippie, upon spotting our car flag, walked slowly toward us, and pronounced, in a laconic, almost theatrical way, “Oh, look man, foreigners.”

I mentioned it was humid, right?

We were at least several kilometres from the festival. Hundreds of people walked by us in groups large and small, traipsing through mud and over broken down fences.

It was chaos, or so it appeared to my 19-year-old self.

“This sucks,” I said to my fellow travellers. “There’s nothing happening here. Let’s go to New York City.”

We piled into the Falcon, and headed off.

Several hours later, as we wound slowly through the astonishing canyons of Manhattan (my first time there), I was convinced that we’d – rather I’d – made a smart, strategic decision.

John parked the car, and we headed into a midtown tavern, all dark and wood-panelled and great. With considerable swagger, we sat down at the bar. Our beer of choice was Miller High Life – we thought it was cool that it came in clear bottles.

We looked up at the television console above the bar as the news came on. It led with an overhead shot of a massive gathering. What is it, we wondered? Where is it? What’s going on?

Of course, it was Woodstock, which we had recently abandoned, basically because I thought it was too humid.

The news anchor began with something like this: “More than 400,000 young people have converged on a farmer’s field in upstate New York for the Woodstock music festival. The biggest names in rock are here. It’s an incredible scene.”

At the bar, which suddenly felt like a sad, forlorn place to be, we looked at each other, quietly. Then, as I recall, the word “loser” was directed at me. Fair enough.

Kudos to the boys, though. They rallied quickly. The rest of our extended weekend was quite fun. On the way back to Toronto, we stopped in Schenectady, N.Y., where in a strip mall the gangly Grant hopped in a kid’s play helicopter, and I laughed myself to the ground.

It’s incomprehensible to me that half a century has passed since our near-Woodstock adventure. One day you’re 19. The next day you’re 69. It’s like a dream.

Truth be told, my judgment has improved only incrementally over the last 50 years. However, I’m pleased to report that I no longer depart seminal, life-altering events based on the humidity.

Better late than never: My pilgrimage to Yasgur’s farm
August 13, 2019 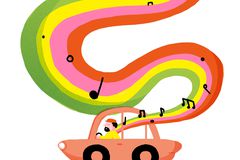