Although he’d never admit it, my grandpa is lonely. He’s 95 and lives alone in an apartment in Niagara Falls, Ont. His wife of 68 years died last year. He has told me often that he didn’t think he’d survive the next year without her. And like many seniors in Canada, this pandemic has only made his loneliness and isolation worse.

So, I spent two hours in line for a COVID test to see him. When the test results came back negative, I packed my bags and drove down the highway to room with the old guy for a week.

It may sound a little odd for a thirtysomething to say, but this 95-year-old man is my best friend. A decade ago he had heart surgery and I visited him every day in the hospital. We hung out, watched the Godfather movies, I saw his naked butt a lot, too. We became best friends. Later we took a trip to Chicago for his cousin’s funeral. Our relationship moved on from grandfather and grandson; I got to know him as a man. We were two dudes in a motel in Chicago sharing stories, drinking wine out of styrofoam cups and talking about the war. (Well, he talked about the war; I’ve never been in a war.)

In lockdown, Mom and I are learning how to reconnect

Earlier this year, as summer turned into fall, I realized I couldn’t wait for this pandemic to end so I could see him again. In the back of my mind, there is the inescapable truth that I do my best to avoid: I’m not sure how much longer I’ll have with him.

On the day I arrive, the door swings open before I can knock. He has been waiting to hear my footsteps. Cane in hand, he welcomes me in. His beaming face always reminds me of a trustworthy garden gnome, and it is the best thing I’ve seen in weeks. He hugs me – the first hug I’ve had in far too long. He squeezes my wrist, spins around and putters his way to the kitchen. As he rounds the corner, he farts. This is followed by an almost inaudible giggle.

I love this man.

I learned so much about him during that week as his roommate.

He wakes up at 5 a.m. to make meatballs – like a farmer tending to his meatball crops at dawn. If he wakes up in the night: he’ll do three laps around the apartment and then go back to bed. He’ll talk to you during those three laps but once they’re over the conversation is done.

He has zero qualms about sustaining complete unbroken eye contact while farting. This also applies to blowing his nose. I also learned that he and my father share the same terrible underwear choices: wildly deteriorated, dangerously tight briefs that predate my existence.

He tells me a lot of “young people” have been moving into his apartment complex. I see mostly people in their seventies, some walking with canes instead of his walker with wheels. I realize this is what he means.

During my stay, it became my job to exchange his inside socks for his outside socks. Nonno has a pair of socks for inside – they have little rubber pads on them; and a pair for the outside that slide into his New Balances. His feet are, weirdly, not gross at all. They are oddly smooth, old man feet.

He visits his wife’s grave every day at the cemetery and I joined him during my visit. He let me stand next to him as he slowly worked his way through his rosary beads. The first 10 Hail Marys he prays in English, the rest he can only say in Italian. His eyes begin to tear up as he switches from English to Italian.

The man cannot form an angry face. Even if he is a little grumpy and worn down and frustrated from not being able to sleep at night, or the pain in his knee is bothering him, or his legs are swollen or his prostate medication is making him miserable – his face never fully shows anger. He is the anti-Walter Matthau.

My dad must have had it so easy growing up with this gentle patient man. But maybe Nonno wasn’t always this way? Maybe this is something that happens later in life? Maybe there’s a crossroads when the reality of your death bears down on you at 70 or 80. Maybe mortality can soften you, crack you open, simplify your life so you just worry about your people? Maybe you become gentle at the dying of the light? Either way, he is the kindest person I know.

Nonno says he is not afraid of death, but I don’t believe him. He says he has no regrets about life. This I do believe.

Nonno doesn’t talk about death too often – he says he was “ready to go” at the age of 83 – but when he does want to talk about it, I’ve realized, as difficult as it is, I need to embrace it. I need to resist the urge to swipe it away with a positive spin: “you’re healthy, you have many years ahead, you’ll live to 100.” He’s 95. He thinks about his death all the time. To not have anyone to talk to about it is incomprehensibly lonely. So, there we are during my visit, watching the Stanley Cup Finals and talking about his death. And for the first time in months, I don’t feel alone either.

It should have been obvious sooner, but this trip was not just about my Grandfather’s feelings of isolation and loneliness, it was about mine, too.

Our understanding of loneliness has changed. In 2010 an examination of 148 longitudinal studies on relationships and mortality found that having a robust social life reduced your chances of dying more than if you exercised regularly or quit smoking. According to a study published in 2015 the health impact of sustained isolation is equal to smoking 15 cigarettes per day. A 2013 report found that reported feelings of loneliness can increase the risk of death by 26 per cent to 45 per cent. Loneliness kills.

When I think about my Nonno and the time we spend together – the early morning meatballs, our long Skype calls, that time he drummed on my pandemic gut and told me I was handsome – all of it, our entire relationship, it’s obvious: we aren’t just failing our seniors by not spending time with them, we are failing ourselves and missing out on so much.

Becoming best friends with my Grandpa is probably the smartest thing I’ve done with my life in the last decade – outside of maybe buying a duvet cover and moving into an apartment with a dishwasher. Spending time with him is a gift. One I will cherish for however long I have with him.

My teenage daughter has cancer, and my job is not to falter. It’s our unspoken pact
December 13, 2020 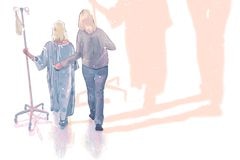 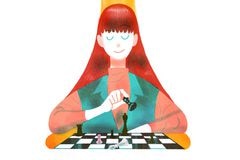 I miss performing Nutcracker melodies for the National Ballet
February 3, 2021 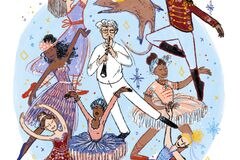