Every morning I walk in the ravine with Jewelz and Jane. Jewelz is my dog. Her idea of a good time is sniffing the uric acid traces of all the dogs who passed here since the last rainfall. Dogs are social geographers. They use pee ink to retrace a map of the neighbourhood every day: Ruby was here yesterday, Bruce the day before, Coco just passed by, Bruce and Zoe may have had an amorous moment three bushes west of the Spadina Road bridge.

We’re in the Nordheimer Ravine, north and west of downtown Toronto. The ravine is named after a piano importer and then manufacturer named Samuel Nordheimer, who lived in Toronto back when Victoria was the Queen. Despite its impressive name, people around here just call this “the ravine.”

Author Jane Jacobs – or at least her spirit and remembered voice – comes on the walk as well. “You’ve got to get out and walk,” she wrote, meaning that the life of a city had to be experienced at street level. On my daily promenade, I often wonder what she’d have to say about the state of the city today, and about being rooted in a neighbourhood, and especially about a peculiar habit I’ve developed on my daily walks.

My i-watch knows far too much about me

I became a ravine-cleaner – what my mother would have called a balabusta, a Yiddish for a good homemaker – by accident. It began a couple of years ago, when the walk became my daily custom. If you looked under the bushes and beyond the trees along the path, this lovely stretch of urban forest was a real mess. We human beings have a rare talent for fouling our own nest. The first time I noticed the trash, I just picked up a few things. The next day I picked up more. But you know how these things go. Soon enough, I came with a bag and a glove and an obsessive eye for every scrap of human debris I could find and tidy up.

On a typical morning, I find: beer cans (both cheap Canadian and expensive European), grocery receipts from the store across the street, face masks, cigarette packages, cigarette butts, little bottles of vanilla (good for a quick hit), pizza boxes, poop bags, the odd needle, empty vodka bottles, juice cartons, endless plastic bags, candy wrappers (chocolate bars are apparently popular at bush parties), a mysterious Irish passport (I couldn’t trace the owner), and a Russian dictionary. It seems oddly appropriate that such a dictionary moulders with Slavic melancholy in the mud. There must be a backstory about how it wound up in a Toronto ravine, abandoned – even by me – to the elements. If Chekhov wrote the story – perhaps titled Old Man with a Pet Dog – it might begin: Sitting in the dog park during the pandemic, she saw, walking along the ravine path, an old man badly in need of a haircut, of medium height, wearing a slightly battered fedora; a black mutt was running behind him.

We go way back, the ravine and I. I brought my first love here at the end of the summer in 1973, and we fell asleep in each others’ arms on the hill near Glen Edyth park. In 1991 I walked many times from our house to Sick Kids hospital when our second-born son was in the neonatal intensive care unit. In 2000 I came here to ask the universe for a gentle passing for my beloved father as he was in palliative care at Baycrest. I often came here en route to my mother’s house on Bernard Avenue as she spent her last few weeks on a hospital bed in her living room. And I have been coming here every day as a grieving parent since that same younger son died, age 26, from injuries in a car accident. It is a place for what even a non-religious person like me might call prayer.

I’m not the only one on a mini-Camino. There’s the woman who strode grim-faced past me for a whole year, then just recently started to return my “good morning” with a lovely smile. There’s an old acquaintance who looks like he experienced a trauma but has never stopped to talk about it; we wave to each other from our respective shadows. One of Canada’s most renowned composers and percussionists walks purposefully along, and we often exchange a word about music or books. I’ve gotten to know the dogs, of course. There’s the Irish wolfhound, the Shiloh Shepherd, the Nova Scotia Duck Toller, the coyote-chasing lab mix, and the many varieties of oodle-suffixed breeds. My dog Jewelz, since you ask, is an ill-bred: part border collie, part lab, part German Shepherd. We bought her from a farm north of Guelph. My son was very particular about the spelling of her name: it ends with a “z” not an “s.” As if a dog cares how you spell its name, I used to tease him. But he chose her name, and it mattered to him, and she still looks for him, almost three years since she saw him last.

Being a ravine balabusta isn’t part of a movement for civic betterment. I’m not on a mission, don’t want to form a committee and don’t even begrudge the beer-can-tossing bush partiers. Those guys living rough have plenty to worry about besides putting their empties and 40-ouncers in the blue bin and their candy wrappers in the black. I tidy up their mess like a parent cleans up after a tween’s birthday party. No, my ravine-cleaning hobby is just a small way to care for a place I love and, as Jane Jacobs did in Toronto and New York, to honour the neighbours I share it with: red-tailed hawks, yellow warblers, Baltimore orioles, ravens, cardinals, chatter-singing sparrows, raccoons, squirrels, coyotes, skunk cabbage, marsh marigolds, sedges, Siberian elm, Manitoba maple, cottonwood, ash, red oak, white pine. And my fellow humans, too, even the ones wearing headphones and too preoccupied to nod hello as they jog by. (I often wonder if they’re listening to podcasts about forest-bathing or How To Be Mindful as they pound down the trail.) We all belong here. We are all part of the intricate, daily, ravine ballet, as Jane might have said. It’s our green ‘hood.

The fledglings in my yard triggered every protective instinct I had
June 3, 2021 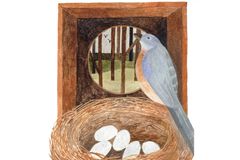 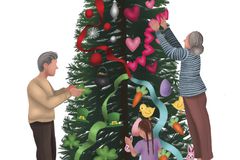 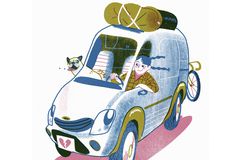