Some lessons in life are taught by those most close to you. Others can be gleaned from life’s passersby and leave you with a lifetime of learnings.

I was raised in a low-income neighbourhood in inner-city Toronto. When my parents divorced, our family survived on three things: love, social assistance and modest income from boarders.

Mom never expected nor deserved the hardship of raising a gaggle of youngsters alone. She sometimes bowed but never broke under the weight of seven children arriving and a husband and father eventually leaving. Her days were long, money was short. But her upbringing in outport Newfoundland in the 1930s was her early learning ground – take the lot you’re given, wait for a fair wind and you’ll get one.

When a fair wind finally blew Mom’s ship ashore, it took the form of Newfoundland boarders. Each was looking for a warm bed and a hot meal. These transitory souls brought with them their luggage but also their baggage, chock-full with the unexpected, the funny, the entertaining and, sometimes, the bizarre. For 10 years, many Newfoundland men and women passed through, one literally passed on and more than a few passed on important lessons in life.

Bill was a chain-smoking ham radio operator who was as tall as he was short-tempered. Like Gordon Pinsent in The Rowdyman, when he looked at me with those weight-of-the-world eyes, I was both saddened and terrified. But, like a rock-strewn shore, in time his hard exterior wore away. I became his junior sidekick. We rode the east-Toronto streets in his smoke-filled Chevrolet Biscayne, often to the constant dashboard chatter of other ham radio operators. I fancied myself a stand-in for a son he never had or, perhaps, one he couldn’t be with. Bill and his Biscayne eventually took a wrong turn in life. He ended up paying a debt to society behind bars. I learned then that, for some, the weight of the world is simply too heavy to bear.

Then there was Gerald, the sleepwalker. Gerald sometimes roamed the house at night in his underwear, eyes wide shut. Often found shuffling in the dark, Mom would gently coax him back to his room, her voice soft but firm. It was a mystery to me how he navigated the basement stairs to his room while asleep. The greater mystery was how Mom navigated these bizarre situations alone. I learned that circumstance and necessity sometimes breed capability and courage.

Let’s not forget Barry, whose misfortune was to pass away one winter evening en route to hospital after a health event in his rented room. To my nine-year-old self, it was like The Waltons meet Alfred Hitchcock, only John-Boy’s comforting voice did not soothe us that night. Instead, we kids were left to comfort one another. Boasting fake courage, we brushed it off the next morning like fresh-fallen snow on the front stoop. I learned then that living is finite and life changes fast.

Will, the bayman, plied his trade on the Great Lakes aboard a 210-metre container ship, the Adriana. He would tell us tall tales of the “high seas.” That he had never been to the ocean did not matter. We knew but didn’t care. He was cartoon-like in his character and equally fictional in his yarns. This was part of his charm. I learned then that people don’t need to travel the world to be worldly.

John and Glenna were siblings who arrived with few possessions and many bad luck stories. He, a twentysomething rabble-rouser, would steal your friendship and your wallet in the same encounter. She, teenaged and shy, was like a bird in your palm. But life had hardened her heart. Her daytime smile would light up a room. But her nighttime tears sang sadness through the thin walls. I learned then that sometimes people go through life wearing masks to cover the hurt inside.

I know now that each of our boarders was searching for the elusive Holy Grail said to exist off the Rock in mainland Toronto – an easier life. Few found it. For those who didn’t, they found instead that big-city living was just a different kind of hard. They returned to the Rock where their small-town struggles were, at least, familiar.

These boarders left a marked impression on me. They taught me not to judge a suitcase by its cover, for each unpacks a unique and sometimes surprising story. Most important, they taught me to hang on to hope. For each of them, hope was the prized possession they carried with them daily. Each let it be seen in their guarded but giving smiles, their tentative but telling stories and in their courage to rise each morning to face another day, each one of them doing so alone among a family of strangers. I know now they were hoping for a better tomorrow. Until then, our home was their temporary port in their life journey. I like to think they gained comfort and hope in the human connection found at our house, including in the curious nine-year-old boy who lived down the hall.

Fifty years later, I am 35 years connected to my wife, herself a proud Newfoundlander. When we first met, we fancied being housemates – shared boarders of sorts. Like my family’s boarders, she had plans to move in and, eventually, move on. Lucky for me, I thought back to my mom and her fair wind. I realized that my Newfoundland ship had come in. Instead of my partner in living, I invited her to be my partner in life.

All these years later, we’ve found a better tomorrow together built on holding on to hope.

How to crash a Newfoundland dessert party
December 17, 2019 The kindness of strangers kept me going on Newfoundland’s East Coast Trail
June 19, 2018 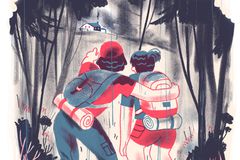 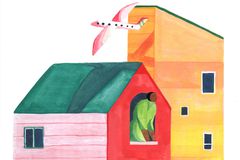