This week, First Person celebrates the joys of Christmastime.

When the first Christmas decorations appear in stores, it’s time to check which family has “the Card,” and which family is destined to receive it – again. Yes, my husband and I have been sending the same card to old friends for over 50 years: one year it lands in Arlene and Moe’s mailbox, the next in ours.

Back in 1970, Arlene and Moe sent us a Christmas card depicting the three wise men. The image was the most improbable, impressionistic combination of fully saturated colours, as though a paintbox exploded on the page. What an amazing artistic mind, to create not only a graceful and unified design, but also a recognizable, iconic depiction out of seemingly random splashes of pinks, purples, oranges, yellows and more.

Arlene and I have known each other since we were 6, when our fathers started working for the same small airline in Edmonton. She became the sibling I never had, and a dearly loved second daughter to my parents. I’ve lost track of how many camping trips her enthusiasm brightened.

When I married Don, we moved away and I regret that we have never lived in the same city as Arlene and her husband – and for years not even the same province or country. But that doesn’t seem to have dampened our families’ friendship via mail and infrequent visits.

In 1970 – that same year we received Arlene and Moe’s card – I was just beginning to think about conservation and recycling. Arlene and I were both pregnant that year, and my husband was just finishing graduate school. We had little money for non-essentials, and it bothered me to throw out the beautiful Christmas cards we received. I saved them all. In 1971, I handwrote our Christmas letters, including an invitation to join us in recycling cards. And then I popped the letter into everyone’s seasonal card that they’d sent us last year. I wrote our names – including our new baby’s name – and the current date just below our friends’ signatures from the Christmas before.

Some people thought this was tacky; they never returned their card. Some exchanged theirs for a few years, but found it difficult to find an envelope the right size, and heaven forbid using one that wasn’t a perfect fit, or worse, homemade.

Arlene and Moe embraced the program wholeheartedly and lovingly returned their card to us in 1972, adding their new son to the list. Names of second children eventually appeared for each family. When the children were old enough to bring in the mail and recognize return addresses they’d gleefully holler, “THE CARD has arrived!”

When we open “the Card,” the first challenge is to discover where this year’s wishes and signatures are tucked because we’ve had to squish them into any available space. Searching through 50 years of wee notes brings back such wonderful memories.

Some of the greetings include, “Things really do improve with age” and “Old friends and old cards are the best!” We learned Arlene and Moe had a first grandchild when they wrote, “Love, Granny & Grandpa.” But this is one of my favourites: “This card has become an icon of our long friendship and love.” And, squeezed between much older greetings, in the smallest writing, is, “Very tiny, but most heartfelt best wishes for Christmas ’90 and New Year 1991!”

The card first travelled from Edmonton to our tiny apartment in New Haven, Conn., when Don was in graduate school and I was teaching home economics in the United States. Through the years, it has spent time in Saskatoon, Sask., and all over British Columbia: Vancouver, Denman Island, Whistler, Ucluelet and Courtenay. It’s been to the tiny village of Broughton Poggs in England, on a Christmas cruise to the Caribbean, and went to California for Christmas, 2015.

Our card has celebrated the season of love in small apartments, rental homes, starter homes, our retirement condo and their retirement home. Pride of place has included pianos, fireplace mantles, bookcases, atop a china cabinet and on an antique washstand. The card stands alone in both our homes, for visual impact. Neither family knew we both did that until recently.

Of course, all this travelling and storage has taken its toll. The fold at the top has weakened so the card splits open when standing; the colour has rubbed off from the edges, too. But, having a daughter who works as an art curator proved invaluable. She taught me how to make a four-fold liner of acid-free paper to snugly hold the card inside tape-hinged matt-board covers, to prevent accidental damage during storage or mailing. Our daughter’s co-worker was enchanted with the Card’s story and made two museum-quality supports – one for each household – so the Card never rests on its delicate edges when on display.

We now send our beloved protected greeting in a waterproof mailer, for extra insurance. Of course, all this packaging is bulkier than what’s required for a normal card, but the extra cost of mailing it doesn’t matter.

Now that all our children have grown up and started their own lives – it’s back to the four original signatures each year. When the kids call home in December, however, they always ask, “Has the Card arrived yet?” 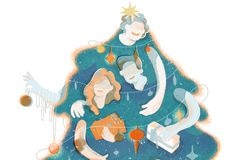 Project Christmas: How I convinced my Persian parents to let me celebrate the holiday
December 20, 2020 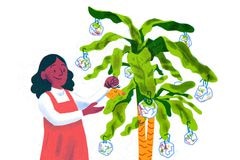 What my children have taught me about Hanukkah
February 3, 2021 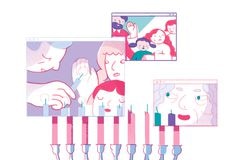