I think about dead people when I run. This is because, at the age of 45, I have too many dead people in my life. It’s not the usual, expected deaths that I think about, such as elderly family and friends, including my grandmother who recently died at the age of 103. It’s the unexpected ones.

I’ve been running long distances for twenty years. Like many runners, I am drawn by the quiet, peaceful and rejuvenating aspects of the sport. I am a non-religious person; running is my spirituality. One of my regular routes in Kitchener-Waterloo, Ont., is a 13 kilometre out-and-back run with the turnaround point at the top of a local ski hill. It’s my go-to run when I need to clear my head, think through a difficult problem or just try and make peace with the world.

Running helped when my father died, at the age of 60, from a massive, inoperable brain tumour. He went from being healthy and fit to dead in a matter of weeks. With the same rapidity, my mother and brothers and I went from enjoying life with him to telling hospital staff to remove his breathing tube so that he could die on his own terms. After returning home, I did what I always do and went for a run. I thought about those last moments around his hospital bed. I put my head on his chest to hear him breathe and to get one last smell of his body. And then I waited, watched and listened until it all stopped.

That year, as fall running turned into winter running, I continued to think about and talk to my dad as I ran. My dad and I shared a dislike for the cold. Like good Canadians, we tolerated it and sometimes celebrated it, but for the most part we’d rather be warm. As such, at the same time that I marvelled at how quiet and beautiful it is to run over freshly fallen snow, I would think about how cold he must be under the ground and I would cry. I told him about my two daughters – both born after his death – knowing how much he would have loved them. I talked to him about work stress and wished he could give me advice. But mostly I just talked and told him how much I missed him.

Years later, my friend Murray died from thyroid cancer. Murray and I became friends in university. After graduation, Murray got married, had two little boys and was succeeding at work and at home. His life seemed to be following a typical, positive arc. But then he got sick. When I think about Murray on my run, I remember the last time I saw him alive. It was in hospital. Murray’s wife lay in the bed beside him, cuddling him. Paradoxically, at the end of this horrible disease and a life cut short, this was a moment of compassion, love, warmth and human connection in the truest possible sense. I keep returning to that scene on my runs – it was life affirming.

My running log for July 19, 2015 includes the shamefully too-blunt entry: “Mom died. Drove to Toronto and found her dead in bed.” My mom had been sick for many years with COPD, and while her death wasn’t technically unexpected, it still came as a shock. When I entered the house, I heard the familiar sound of the oxygen tank. In contrast to the usual rhythmic sound which follows her breath going in and out, this was just a steady, uninterrupted hiss. I opened the door to the bedroom and she looked to be sleeping peacefully in bed. I allowed myself to think she might not be dead, but I knew. Eventually, I touched her and the stiffness of her body is something I will never forget. I worried that she was lonely and I wished I had done more for her.

Dad. Murray. Mom. And then James – a friend, fellow runner and fellow professor with me at Wilfrid Laurier University. He wanted to die at home. Family and friends set up a visiting schedule, and before I arrived I ran to the ski hill and, naturally, chatted with dad about my life and also about James.

When I went to see James, I told him about my run, including why I run up that hill. We both knew what I was getting at and a few days later I was back atop the ski hill saying some final goodbyes to James.

Along the trail and up the hill I went. In addition to routes and kilometres, my running log (which serves as my de facto journal) notes the peculiar ability to run while crying. It’s also possible to run while laughing, though both take a bit of work. And both draw curious looks from nearby runners and walkers.

There’s an easy, and not-half-bad, joke here that I should stop running the ski hill before I kill off any more friends and family. And it’s not as though I spend most of my running time thinking about death. Quite the opposite. But I’m not a religious person. I don’t believe in a higher power and I don’t believe that my dad, mom, Murray and James are somewhere else right now. Nor do I believe that their deaths served a purpose. They died before they should have and that is as cold and unfair as it is true and final. My running ritual helps me stay sane against that absurdity. It helps me stay connected to them and to make peace with their absence. Beyond that, the simple, quiet monotony of running reminds me that I am, however temporarily, lucky to be alive. 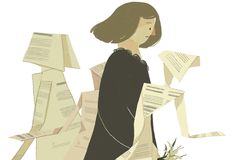