My left arm is small, weak and partly paralyzed. I’m not going rock climbing any time soon. I have Erb’s palsy (sometimes called Erb-Duchenne palsy or brachial plexus palsy). It mostly sucks, but I deal with it.

But – “Oh, we’re going axe throwing for the work retreat?” Not me.

A lot of my close friends know about my injury. Some people I’ve known for years swear they’ve never noticed. Others see it immediately.

My movement and strength are limited, and there’s often a dull pain that emerges if I haven’t put my arm through some good stretches. I can’t lift my arm past my shoulder. I can’t put my hand in my pocket. Hanging (and wiring) lights with one arm is every bit as frustrating as it sounds. Often, my right arm is in pain because it has to pick up the slack for old lefty.

I wear long sleeves a lot. Hiding my arm in pictures is something of a science I’ve mastered. I’m pretty insecure about it, but I’m usually smart enough to realize nobody really cares.

Almost everybody has something wrong with their body that they are worrying about. Something ever-present. This isn’t even my only thing, but it informs almost everything about me.

The injury happened when I was born. My arm was pulled during delivery, and a few of my arm’s upper big nerves (C5-C8) were severed. It might have been due to a choice the doctor had to make: retrieve me or leave me to choke. Or maybe it was an accident, which happens to many people, all over the world, every day. It might have been an inept physician. It’s hard to know for sure, but I like to think it was some quick-thinking doctor who saved my life. It helps me accept it. But it was most likely just an accident. Stuff happens.

I’m not even close to the worst example of this kind of condition. There are people who can’t even move their arms at all.

I didn’t often get teased about it growing up, which is good. Sometimes I even joke about it. You can’t take yourself too seriously, right?

My parents did everything they could to create an environment where I could succeed. Doctors. Specialists. Physiotherapy. Acupuncture. Electric stimulation. Exercise. Stretches. Football. Martial arts. More specialists. More exercise. Swimming.

Until finally, we just stopped. I’d done enough. You can’t exercise muscles that have no working nerves going to them. I was now a young adult and had to reckon with the fact that it wasn’t going to cure itself, and I had to continue just being the way I was. I did have decent strength and I could type well enough. That’s as much of a win as you can get.

I find that music helps immensely. Turntables. Drums. Bass: four strings are, in fact, easier to play than six! Though I often look a bit goofy, I feel like I can take part and keep my arm in decent shape. The hobby is the therapy.

But drop and give you 30? I’d rather eat a light bulb.

As a kid, I knew about this Stephen Hawking guy from TV. He occupied an almost-mythical status. I was a casual amateur of the kind of big physics he revolutionized. He, with his broken body, amazed me. How could he do anything? He was given a death sentence. Yes, he had a talking computer. Yes, he was a genius. Yes, he had help.

But just look at him! How could he dare to participate in this world as nature made him? Why didn’t he just … stop? It just looked so exhausting. So frustrating. Why do anything at all, if this was how one was to drag oneself through this mess of a life? Why take part in the joke? Surely someone else can do the work in your place.

Yet far from his brilliance about the Big Bang, black holes and the cosmos, the grand lessons I tried to absorb from his amazing life are these: We may not be special, and we may all be mere specks of star dust out here in this cold existence, but each of us should put forth what’s in our mind and what’s in our soul, regardless of the challenges. Life is short. You can’t give up. People will think you’re difficult. You will not always be right. You will rely on people. They will rely on you. You will lose bets and you will lose friends. You will not be perfect. Your challenges don’t give you permission to be a jerk, so when you’re a jerk, apologize. Take your time. Listen. Make people wait to hear what you have to say. Big ideas are sometimes good ideas, too. Try harder. Find a way.

I try to draw inspiration from Hawking’s amazing life whenever I think I can’t figure out how to do something. When any of my limitations urge me to shy away, I try to stay strong and press on. I don’t always succeed, but if he could do what he did, then maybe anyone can do anything, in their own way.

Do I think having broken parts is some cosmic test? Nope. Do I think rising above a challenge is good for you? Yeah. Everybody has something. I know I have a chip on my shoulder about my limitations, and I’m starting to be okay with it. It’s who I am and that’s fine. I came out mostly unscathed, in the grand scheme of things.

Rock climbing? Ugh, fine. Maybe one day, if I figure it out. 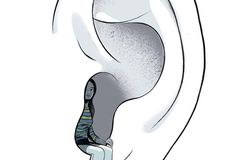