The covers are faded, worn. Not just by the passage of time. But by numerous moves over the years, from student house to co-op apartment to our first house. From city to city. Each move meant a paring down of one’s life, especially as the years rolled on and moves became an endurance test. But despite their bulk and weight I clung fiercely to these milk crates full of musical memories.

Now I handle my old vinyl records reverently, like relics. For indeed, these are relics tracing the decades of a life. My life. Chronicles of bygone times.

I pull a box full of albums out of my attic and pick up one by the most dynamic live band I ever saw, South Africa’s Juluka. Made up of Black and white members, they somehow managed to steer clear of South Africa’s apartheid laws keeping the races apart. Another cover shouts Sandinista!, a triple album by the best punk-rock band, the Clash, celebrating Nicaragua’s revolution four decades ago, led by the same man who still wields power in that country today. Only now he’s a tyrant.

Album covers took art out of art galleries and put it into the hands of music lovers everywhere. Some featured straightforward photos. A youthful-looking Bruce Springsteen gazes out on Darkness at the Edge of Town, likely looking much like his son does today. Yet some bands put almost as much effort into their album jacket designs as they did into their music, hiring inventive graphic artists whose work resonated with their album’s musical vision. Rather than a single album sleeve, some musicians put their album into a double sleeve with the inner two covers portraying an extended piece of art or song lyrics. Woodstock, a triple album, opened up into a panoramic photo of the vast throng gathered at that legendary concert in 1969. I still remember dropping in on a friend in the early 1970s. As I shuffled through his record collection, my jaw dropped at the image of a kaleidoscopic prism design set against a black backdrop. Pink Floyd’s landmark Dark Side of the Moon, one of the best-selling rock albums of all time.

Music of all kinds can be called up effortlessly nowadays by a couple of clicks of a computer mouse. Like so much of life today, satisfaction must be immediate. But back in the day, listening to music was almost a ritual of homage: removing the record from its jacket, placing it on the turntable and blowing dust off the needle before carefully setting it down to play. Scratches on the record were accepted like occupational hazards, unless you were a zealot of pure sound, like my friend Dennis, who refused to let me handle his albums naked outside their sleeves.

Then you sat back to listen. Really listen. Not as background sound while doing something else. Not as your eyes were captivated by a cartoon-like video, pulling your attention from what your ears registered. It was all about the music.

Every album tells a story, often taking me back to unforgettable concerts, although my memories of some of them are... hazy. Hey, it was the Sixties and early Seventies; if you can remember what happened, you weren’t there. I gaze at a cover of reggae legend Peter Tosh, sitting in a field of ganja plants, puffing on his pipe. When he launched into pro-pot anthem Legalize It at Toronto’s venerable Massey Hall, the concert hall’s darkness lit up – literally –with hundreds of joints, as security staff looked on helplessly. A highway stretching into the distance on Jackson Browne’s Running on Empty album cover rolls back the years to 1982 and a million-person peace rally in New York, with Browne sharing a Central Park concert stage with Bruce Springsteen, then at the peak of his popularity. As we walked toward Central Park and the sound of Springsteen became more clear, an excited buzz rippled through the crowd: “It’s him! It’s the Boss!”

All things must pass, sang George Harrison. All things must pass away. In an era of instantly accessible digital music for most people, the era of the record album has come and gone. It’s time for me to downsize. When I asked my daughter if she’d like to keep any of my albums, her quizzical expression spoke more loudly than any words: “Dad, the era of the dinosaur is over." Yet not completely. I’m shuffling through my albums today not just to take a trip down memory lane. Soon I’ll be boxing them up to take them to my musician friend Allan in nearby Almonte to sell at the occasional garage sale. There are still a lot of fans of vinyl, he tells me, and not all of them are old hippies either. In fact, as a test I put several of my albums out in front of my house during our annual street sale several years ago. A few young guys snapped them up, drawn like moths to a flame.

My trip to Almonte approaches. The day before leaving, I wake up early, anxious. Butterflies fluttering through my stomach, I rummage through the basement to find a couple of dusty milk crates, containers that reassure me that I’m giving my records a respectful sendoff. Nonetheless, every time I put an album into the crate, my spirits sink further. As if I’m tearing up precious family photo albums.

I load the crates into the back of the car, reach up to shut the door – and stop. And reflect. I reach into a crate and pull out an album whose front cover is smeared with melted candle wax from many late-night listenings, depicting a shabbily dressed old man stooped under a bundle of firewood on his back. The back cover depicts a bleak scene of dilapidated British row housing. But inside, a treasure: Led Zeppelin’s fourth album, featuring Stairway to Heaven, the song that perhaps best epitomized the spirit of the times half a century ago. When the Zeps launched into its opening chords 45 years ago at a London concert I attended, I said to myself: “Take me up God. It doesn’t get any better than this.” How can I part with this record? I also take out another milestone album next to it, Dark Side of the Moon. My heart somewhat more at ease, I close the car door, bring the two salvaged albums inside and place them near my antique books.

If time wants to pass me by, so be it. 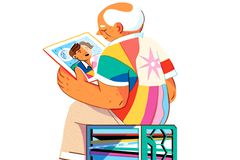 To discover the soul of a city, search out its record shops
March 13, 2018 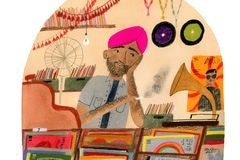 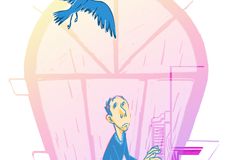